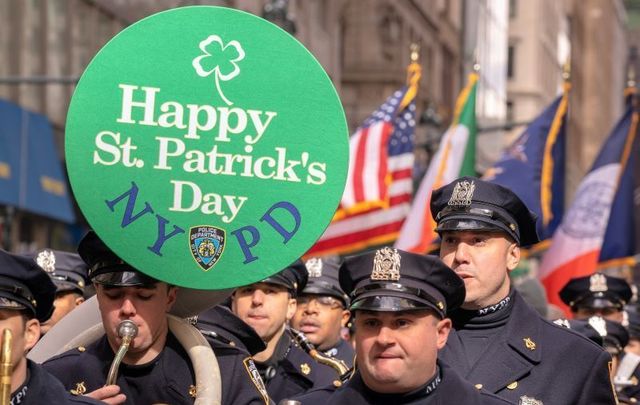 Steven McDonald was a longtime fixture in the NYC St. Patrick's Day parade before his death

The NYC St. Patrick’s Day parade committee nearly kicked out a banner for Steven McDonald, a hero NYPD cop, which was being carried by his family.

Page Six reports that on March 16, the day of the St. Patrick’s Day parade in New York City, the McDonald family was told they were not allowed to march with their banner that read “love is the way.”

McDonald, who passed away in January 2017, is remembered as a hero after being shot while attempting to thwart a robbery in 1986. Paralyzed, he lived the rest of his life in a wheelchair and with a ventilator but was a longtime fixture in the New York City St. Patrick’s Day parade even after the tragic occurrence.

Since his death, Patti Ann McDonald, who was married to Steven for less than a year before the 1986 incident, carried a banner with her son Conor McDonald, who is now a sergeant in the NYPD like his late father, honoring McDonald.

The green banner, which features McDonald’s name and photo, reads “Love is the way.

Page Six reports that on March 16,  parade formation chairman Reilly Dundon tried to prevent the banner from being marched in the parade, citing that the McDonalds had not received proper permission.

Dundon told The Post's Susan Edelman: “We have a rule that if a group is going in with a banner they have to get prior approval for it — and they hadn’t."

Dundon reportedly reversed his decision after two detective friends of McDonald spoke with him and the banner was marched up Fifth Avenue.

“He was abrasive, he was rude,” a friend of McDonald said of Dundon. “I felt it was extremely disrespectful.”

Later, Patti McDonald, who is the outgoing mayor of the Long Island town of Malverne, said of her late husband: "I kind of feel his presence here."

You can watch a story about Steven McDonald here:

"You can't let anger destroy your heart, you have to let love win". Meet a Saint: Steven McDonald, and his heroic life spent to witness the power of forgiveness.