Ava Barron is set to receive her last chemotherapy treatment this week and her Irish father Maurice is looking for help to make her day special. 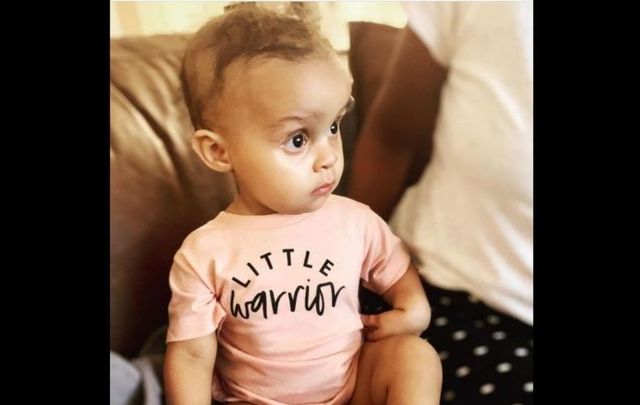 Ava Barron was diagnosed with a malignant Rhabdoid kidney tumor and will receive her last chemotherapy treatment on November 25. The Barron Family

Irish man Maurice Barron and his wife Kandice are appealing for supporters to send their daughter Ava well wishes for her last day of chemotherapy under the hashtag #AvaKayLastChemoDay.

Earlier this year, Ava Barron was diagnosed with a malignant Rhabdoid kidney tumor when she was just a year and a half old. Now, her father Maurice, a native of Co Waterford, is appealing for videos of well-wishes for young Ava as she will receive her last chemotherapy treatment in New York City this Wednesday, November 25.

On November 22, Maurice shared a video on the Instagram page that chronicles Ava's journey: “Ava started her eighth and final round of chemotherapy today. She’s going to have chemo for the next four days - it’ll be Wednesday, November 25 and she’ll be done and finished with chemotherapy.

“That’s such a huge, massive milestone for us. There’s times that we thought we wouldn’t get to this day.

“Looking back on this whole journey - it’s been 211 days to be exact, or just under seven months, since Ava was diagnosed with this malignant Rhabdoid kidney tumor.

“In that time, she’s had three major surgeries, and one of those was to remove her kidney. She’s had 11 rounds of radiation, she’s had 26 blood transfusions, and once we get to Wednesday, once get past Wednesday, she’ll have had eight full rounds of chemotherapy.

“And Ava won’t be two years old for another four months, which is crazy. What she’s had to endure in such a short time, there’s no wonder why most of us think she’s a superhero.

Maurice noted that he and his wife Kandice feel they’re “very lucky” to still be here with Ava, especially after two particularly frightening occasions where they thought they might lose Ava.

Looking ahead to Ava's last chemotherapy session this week, Maurice said: “In non-COVID times, in non-global pandemic times, I’d be throwing the biggest party I possibly could right now. I’d have all our friends over, I’d have people over from Ireland.

“On the last day of chemo in most hospitals, you have all your family around you, all your friends, you ring this bell as you’re going out the door.

"But on Wednesday it’s just going to be me and Ava, and that’s the way it’s been for most of this."

Maurice explained that due to COVID, Ava can only have one parent with her at a time while she's receiving treatments in the hospital.

“So given all of that - what can we do? What we were thinking, and what we would love people to do, is if people could virtually wish Ava a happy last chemo day.

“These battles with cancer, they’re built on hope. Without hope, we would have been lost. Lost without everyone checking in on us and doing everything they did.

“And the second reason is that today, and tomorrow, and the day after that, there’s going to be parents told that their child has cancer. It’s this life-altering moment. Especially at the start, it’s so all-consuming and it’s so hard to see an end to it, to see the light at the end of the tunnel.

“It’s like being at the bottom of a mountain and looking up and saying to yourself, ‘how am I going to get there? How do we get to the end of this?’”

“Maybe seeing this video, maybe seeing the video of people saying ‘Hey Ava, happy last chemo day!’ will give them enough hope that there is a light at the end of the tunnel.”

“She’s an amazing child and we’re so lucky that she’s still here with us,” Maurice added.

The Barrons are currently not seeking financial aid, but have requested that donations be offered to The Frances Pope Memorial Foundation "who have helped us so much since the start of chemo treatment."