The Bronx AOH hosted its annual dinner dance which attracted an overflow, buoyant crowd at Rory Dolan’s on Sunday. 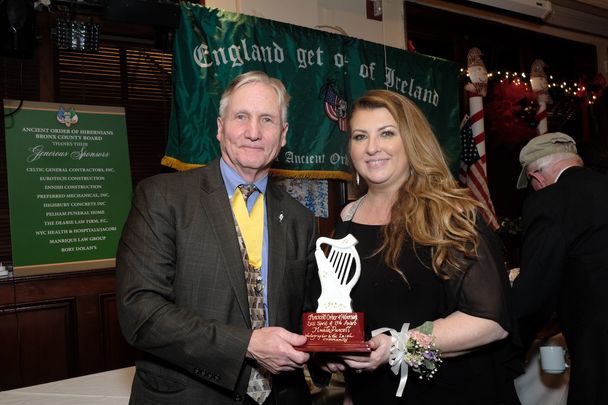 It was back to happy reality on Sunday afternoon at Rory Dolan’s in Yonkers, where the Bronx AOH held its annual dinner dance/Spirit of 1916 awards ceremony attended by an overflow crowd grateful to gather again after the 2020 event was a casualty of Covid-19.

The mood was festive and the cause a worthy one – the marking of the 40th anniversary of the 1981 Irish hunger strikes which, as Bronx AOH President Martin Galvin noted, united Irish Americans from coast to coast in a common goal: to show the world that the British government, no matter how hard it tried, would never break the resolve of the jailed hunger strikers fighting for Irish freedom and justice.

People who hadn’t seen each other for months mingled like the good old pre-pandemic days.  The social side effects of Covid-19 are endless, including how the virus prevented gatherings such as Sundays', but the Irish American community is nothing if not resilient and once again ready to party.

“Nuala didn’t know why we wanted to honor her,” Galvin said in his introduction to the New York Irish community’s favorite shutterbug, who has been documenting local events since she started to work with the Irish Voice in 2003.

But the reasons are numerous – she’s a proud Irish American raised in Woodlawn, daughter of immigrants from Tipperary and Belfast.  A kind, abundantly generous and patient friend to so many (full disclosure: she’s one of this reporter’s BFFs).

Nuala is also the newly minted president of the Tipperary Association of New York, a member of the Ladies AOH, and a board member of the Aisling Irish Community Center.  She ticks all the boxes and then some.  As usual, she was humble in her acceptance of the Bronx AOH honor.

“I’ve been overwhelmed by the outpouring of support leading up to today,” she said.  “I’ll always remember the amazing support you showed me.

“I was at an event recently and the main speaker posed the question of what does it mean to be Irish-American.  I know that little hyphen means a lot of things to different people.  For me, it means I was raised by Irish parents in America who passed down traditions of Irish language, customs, dance and music, yet I grew up in the Woodlawn section of the Bronx.  It’s all part of the immigrant experience.” 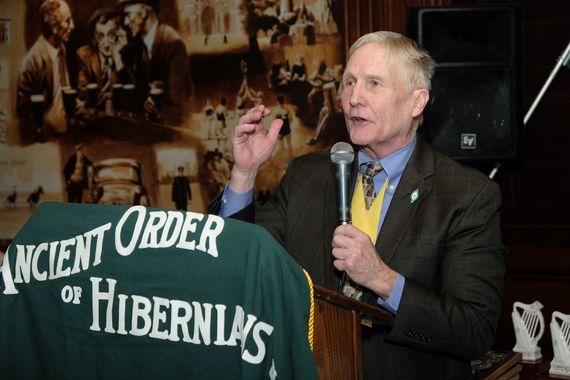 In Nuala’s case that started when she was born in Kilkeel, Co. Down and brought to New York as a young child by her late father Andy, a native of Gortnahoe, Co. Tipperary, and her mother Carmen, from the Falls Road, both of whom she saluted for the sacrifices they made for their four daughters to make a solid life in America.

Engel, who lost his seat last year after serving 16 terms in the House of Representatives, was described by Galvin as a “champion of the Irish community for more than 30 years” who served Irish America “with dignity and respect.”
The former Bronx representative spoke passionately about his affinity for Irish causes, and was comical recalling some of his time on the front lines.

“When Queen Elizabeth came to Congress, in my first or second term, I boycotted,” he remembered.  “I felt a little guilty when I saw her on TV a few weeks ago. She’s old, and I thought maybe I was mean to her. But I wanted to prove a point.”

Engel also spoke of his first visit to the North as a member of the House not long after his 1989 election, and being told by the State Department “right off the bat, that we will never set up any meetings for you if they have anything to do with Sinn Fein. 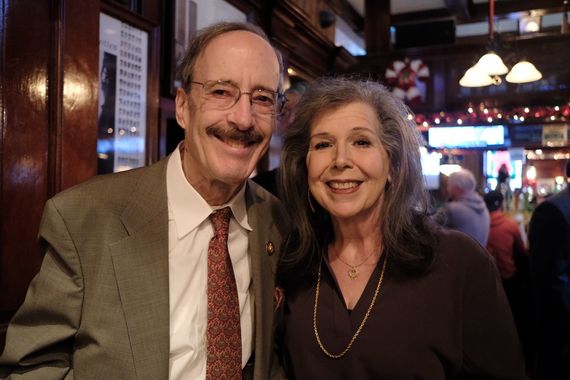 “So I said, ‘I don’t need you, I got my own contacts, go to hell!” – and the guests in Rory Dolan’s loudly applauded.

“I was fortunate to be in Congress and have people listen to me. But you can’t do that if you don’t have the army behind you, and that army is the AOH.  Irish unity is an issue that we are not going to abandon. We are going to fight until Ireland is one. And we are going to make sure that people understand that if there’s no freedom in Ulster, there’s no freedom anywhere in the world.”

O’Connell, based in Ohio, said the AOH’s influence comes from its membership, “without which, we could not be successful in the work we do in Ireland, in immigration, in justice issues, or our work for a united Ireland,” he added.

The event’s final honoree, Shanley, spent years on the front lines of New York protests after being introduced to the cause of the hunger strikers by his mother.

“I was a kid, 17, when Bobby Sands and the others first started their hunger strikes. I got on a subway train with my mother to support them at a rally.  It’s overwhelming to me how the events of 1980 and 1981 changed my life forever,” he told the audience.

“It was a remarkable time. It didn’t start then and it hasn’t yet ended, but we are on the road to Irish unity. It is in reach and we will get there.”

Galvin, who served as master of ceremonies, spoke forcefully about the power of Irish America throughout the past four decades, and credited the activists who took to the streets to demand justice and respect for the hunger strikers.

“The day Bobby Sands was buried more than 10,000 people flooded Third Avenue and closed off the side streets. Some of the NYPD officers saluted,” Galvin recalled.

“A month later Prince Charles came to Lincoln Center and sat next to Nancy Reagan to show how the British were really civilized and would never do anything wrong or torture Irish prisoners. More than 20,000 of us stood with (hunger striker relatives) and shouted so loud that they heard us two blocks away, and so loud that Prince Charles complained the next day saying that he didn’t like being a target of so much invective.  So the mayor issued a press release saying that if you don’t like it, get out of Ireland!”

Representatives of the group Relatives for Justice, Andree Murphy and Mark Thompson, were also guests of the Bronx AOH.  Murphy provided an update on the quest of family members of those murdered during the Northern Ireland conflict to seek truth and justice from the British government.