Andrew McGinley says he accepts but does not understand RTÉ's reasoning, and that his appearance on The Late Late Show was to be "absolutely love-filled." 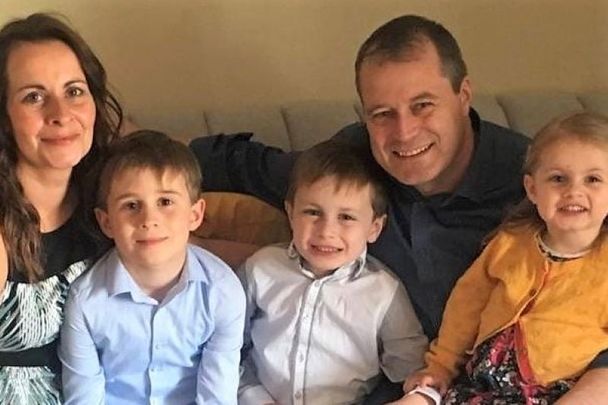 Deirdre Morley and Andrew McGinley with their children Conor, Darragh, and Carla. RollingNews.ie

RTÉ claims that it canceled Andrew McGinley’s appearance on the October 8 episode of its Late Late Show after concerns were raised by his wife Deirdre Morley’s wider family.

"We believe that the timing of our interview would certainly have caused upset and grief," RTÉ said in a statement, as read by Bryan Dobson during a conversation with Andrew McGinley on Wednesday's News at One on RTÉ Radio.

“Having spoken to some of Deirdre’s family, we understand that airing an interview at this time would be too painful an experience for some of the wider family. It was appropriate for RTÉ to listen and reflect on their views.”

Morley, who has a documented history of mental health issues, was found not guilty by reason of insanity after murdering her and McGinley’s young children Conor, Darragh, and Carla in January 2020. She has since been committed to mental health hospital. McGinley claims that he and his family were not aware that Morley’s mental issues had deteriorated so severely, and is now campaigning for greater family involvement in such cases.

In the wake of his children’s deaths, McGinley launched three separate charity initiatives - As Darragh Did, Conor’s Clips, and A Snowman for Carla. He had planned to launch As Darragh Did on the October 8 episode of The Late Late Show before his appearance was canceled.

“I accept The Late Late Show decision, but I don’t fully understand it because I’ve received messages from Deirdre’s wider family in support of what I’m doing," McGinley said on Wednesday while on News at One. "So, I’m upset that this seems to have caused a divide within Deirdre’s family.

“For me, it was to be a joyful, absolutely love-filled conversation.”

RTÉ says it is obliged to adhere to codes as outlined by the Broadcasting Authority of Ireland (BAI). According to the BAI’s Code of Programme Standards, “Broadcasting can be a force for public good. In enriching people’s lives through entertainment, information, or other programming, broadcasters must be free to make programmes that may be provocative or deal with sensitive issues.

“However, broadcasters must take due care to ensure that audiences are not exposed to harmful content and must provide adequate information to audiences to allow them to make informed choices about what they listen to and watch.”

“So that statement is - it is what it is. I accept it, I’m not going to be on, that’s fine. We’re a small charity, we’re do our best, we’ll keep the children’s names and their memories alive in other ways.”

Elsewhere on Wednesday, McGinley questioned on Twitter how the BAI could consider "a charity launch and a colouring competition to be sensitive issues."

Statement below from RTE.

So the Broadcasting Authority of Ireland @BAItweets consider a charity launch and a colouring competition to be sensitive issues? Really?
@rtenews @RTELateLateShow

He added: “I advised @RTELateLateShow of the overwhelming family support and support from the many people who actually saw the kids on a regular basis as well as all their friends.

“This should be about Conor, Darragh and Carla’s memories, their lives and legacies, no one or nothing else.”

I advised @RTELateLateShow of the overwhelming family support and support from the many people who actually saw the kids on a regular basis as well as all their friends.
This should be about Conor, Darragh and Carla’s memories, their lives and legacies, no one or nothing else.
🥰