Andrew McGinley, whose three young children were murdered in their Dublin home last year, has vowed to speak of his children "until his last breath." 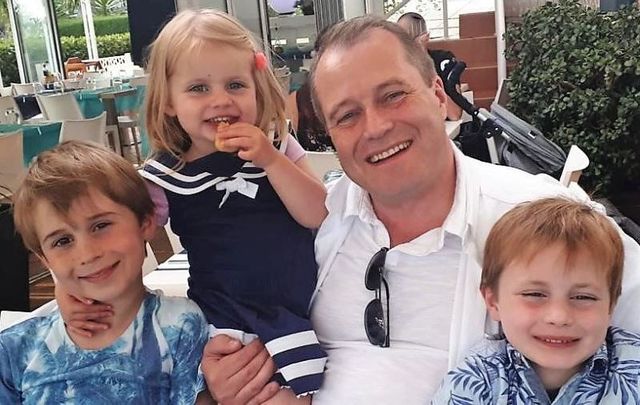 Andrew McGinley with his children Darragh, Carla, and Conor. RollingNews.ie

Andrew McGinley, whose three young children Conor, Darragh, and Carla were found dead in their Dublin home last year, has vowed to continue speaking about his children “until his last breath.”

McGinley's comments come after he learned that RTÉ scrapped his appearance on the October 8 episode of The Late Late Show after the Irish broadcaster received a letter that his story may be difficult for viewers.

Until my last breath I will never stop talking about Conor, Darragh and Carla
🥰🥰🥰 pic.twitter.com/me9yJDMny2

McGinley told the Irish Independent: “I was informed by RTÉ that they had received a letter which said that it could be a painful and traumatic experience to see me talking about Conor, Darragh, and Carla on the Late Late Show.

“Many people who knew the children well were looking forward to the show, especially many of the kids’ friends who were being allowed to stay up to watch them being talked about with Ryan.

“I would have been conscious of that but I only speak with love when I talk about Conor, Darragh, and Carla.”

McGinley had planned to use his October 8 appearance on RTÉ's The Late Late Show to launch As Darragh Did, a charity established in memory of his eldest son. He said he was devastated not to be able to launch it on primetime television, though the launch still went ahead online.

Thank you so much for all your messages.
Devastated not to be launching the As Darragh Did event live on @RTELateLateShow but it is out of both our hands.
We’re all set to launch tonight at 9pm through https://t.co/zSUMEar2aO
Andrew 🥰 https://t.co/QERdEuJZvE

RTÉ has not responded to requests for comment about McGinley's appearance on the October 8 episode of The Late Late Show.

Responding to the matter, Senator Micheál Carrigy, Seanad Media Spokesperson for Fine Gael, said in a statement on Tuesday: “Is it standard practice for RTÉ to pull guests due to complaints received from the public?

"How many complaints have they received in relation to other guests, and have they taken similar actions as a result of these communications?

"Should this not just be an editorial matter for the Late Late staff rather than for members of the public to decide who appears on the show?

“RTÉ has so far refused to comment on this issue, but they must now come out and outline their exact reasoning for their decision to remove Mr. McGinley from the show. Full transparency and clarity is needed when it comes to the actions of our national broadcaster."

On January 24, 2020, the bodies of Conor (9), Darragh (7), and Carla (3) McGinley were discovered in the family’s home in Newcastle, Dublin. Deirdre Morley, the children's mother, was charged with their murder but has since been found not guilty by reason of insanity and has been committed to the Central Mental Hospital.

The Irish Independent notes that since his children’s tragic deaths, Andrew has been campaigning for greater inclusion for families in the mental health treatment of loved ones. Deirdre had a documented struggle with mental health issues, but Andrew claims he and his family were not aware of how serious her conditions had become.

In addition to As Darragh Did, McGinley has established Conor’s Clips and A Snowman for Carla in honor of his children.

Of his charity projects, McGinley told the Irish Independent: “I would be eaten up by what happened if it wasn’t for the projects for the children.

“Lately a few people have asked, does it make you happy? I thought about it, and it fills me with so much love that it lifts me. It’s as good as happiness or joy. I wouldn’t call it that though, it’s love.

“Am I angry? Yes, I am angry. But I don’t think anger will get me anywhere and I know the kids wouldn’t want me to be angry. I don’t want to be angry. For me, I just want that this never happens again.”

You can learn more about Andrew McGinley's three initiatives honoring his children here.