Andrew McGinley vowed to celebrate his children's "all too short lives" in an emotional post-verdict statement on Thursday. 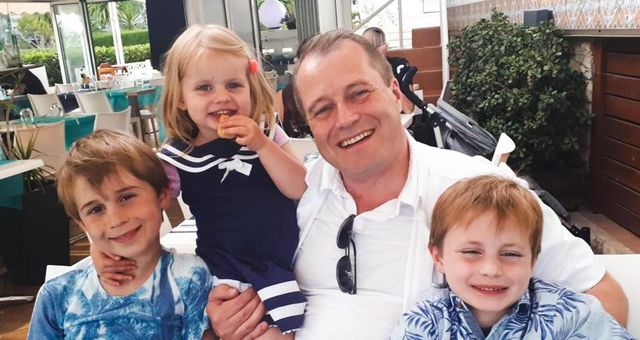 The husband of the woman who was found not guilty of murdering her three children by reason of insanity has paid a heartbreaking tribute to his three kids in an emotional statement following Thursday's verdict.

Deirdre Morley was found not guilty of the murders of nine-year-old Conor, seven-year-old Darragh, and three-year-old Carla by reason of insanity in the Central Criminal Court on Thursday afternoon, and her husband Andrew McGinley said that it was "probably the right verdict".

McGinley gave a post-verdict statement to the media on Thursday and also participated in a hugely emotional interview on RTÉ's Prime Time on Thursday night.

In the statement, he vowed to continue to celebrate the "all too short lives" of his three children so that they are never forgotten.

McGinley has filled the channel with videos of his kids - both funny and poignant - since it was launched last April.

Conor told his father that he wanted to start a YouTube channel around Christmas 2019 and had mapped out two or three sketches for his first videos.

McGinley said that he hoped he could continue to honor his children's memory through the YouTube channel.

"I hope to continue to do that with the same great sense of humor which  Conor had," McGinley said in the post-verdict statement.

McGinley became a soccer coach at Rathcoole Boys in honor of his seven-year-old son Darragh, who was involved in just about everything in the local community, including the local soccer, GAA, athletics, and drama clubs.

He also said that he was starting "As Darragh Did" - a charity to encourage people to become more involved in their own communities.

Finally, to his daughter Carla, McGinley promised that he would build a snowman.

"She was fascinated that the stuff to make snowmen came out of the sky. I promised her that, when it would snow, we’d make a snowman," he told RTÉ's Prime Time.

He additionally plans to launch a coloring competition called "Snowmen for Carla" to honor his daughter's memory.

McGinley, who still lives in the family home where his three children died, said that he finds happy memories wherever he looks.

"It still feels like home, you know? Everywhere I look around, I can see happy, happy memories of the kids," he told Prime Time.

"It was a happy house. They were very happy kids. I think it was because they were such great friends."

McGinley also demanded an investigation into his wife's treatment, diagnosis, and medication in his post-verdict statement.

"If Deirdre’s diagnosis was questionable prior to January 24th, 2020 then surely so too was her treatment and medication," he said on Thursday afternoon.

"We are now also aware of a number of occasions within Deirdre’s professional care when her initial diagnosis should have been queried but none of these seem to have been fully addressed."

He said that the issue was a "matter of urgency" and said that he doesn't want to see another parent grieving over the "catastrophic" loss of their child in similar circumstances in the future.

He pointed to the fact that more than 50 Irish children have died at the hands of their parents over the past 20 years and that 60% of those parents had contact with psychiatric services. He said that the Mental Health Act 2001 doesn't go far enough to ensure that family support structures for the patient are fully engaged and included when mental health professionals are treating loved ones.

McGinley said that his children would still be alive if he was involved in his wife's care.

Deirdre Morley had a long history of depression and mental illness and her condition deteriorated throughout 2019.

The Central Criminal Court heard how she smothered her children with sticky tape, plastic bags, and a pillow during the harrowing two-day trial.

The court also heard evidence from a Garda interview with Morley, where she revealed that her son Conor had struggled as she tried to smother him, telling her "Mum stop". She told gardaí that she replied "I'm really sorry" and pulled the bag tighter over his head.

Morley attempted to take her own life after killing her children but passed out on medication and alcohol before she could do so.

She was placed in an induced coma for several days in Tallaght Hospital and reportedly expressed regret and remorse when she awoke, telling hospital staff that she just wanted a time machine.