US Democrats in Ireland, keen to see Trump's presidency come to an end in November, were able to cast their votes in the Democratic primary from a Co Galway pub. 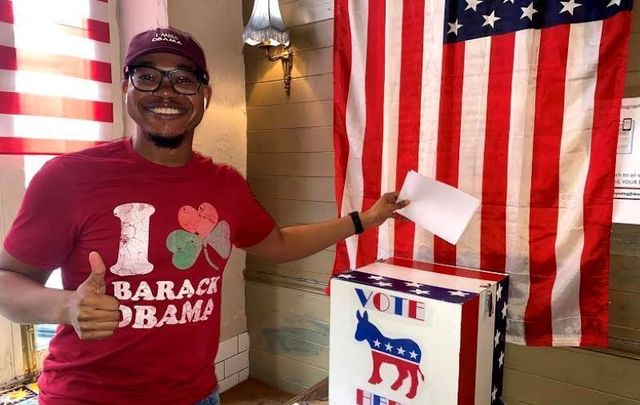 American Democrats abroad in Ireland were able to cast their votes for the Democratic primary in Co Galway beginning on March 3.

US Democrats living in Ireland are so passionate about the need to defeat President Donald Trump in November that many of them made five or six-hour round trips in order to take part in a primary in a Galway pub on Saturday afternoon.

Whether they were Bernie Sanders or Joe Biden supporters, those who made their way to McGinn’s Hop House in Galway city centre seemed to be united in their belief that the world – and not just the United States – needs to see the back of President Trump.

Business was brisk at McGinn’s pub throughout the afternoon as Democrats Abroad Ireland members, led by T.J. Mulloy, facilitated party members from Cavan to Clare and Limerick to Dublin, checking their registrations and giving them the opportunity to vote.

For four hours, a steady stream of voters took up the opportunity to have their say in who will be the Democratic nominee for President of the United States. Registered Democrats can vote in Ireland rather than their home states and overseas party members send their own delegates to the Democratic Convention.

US voters in exile seem to be far less reticent about disclosing who they vote for than their Irish counterparts, and Sanders was the big winner in the straw poll undertaken by IrishCentral.com over the four hours.

Stefanie Di Crore, originally from Long Island, New York, made the three hour round trip from Limerick, where she lives with her Irish husband. She voted for Sanders because of his policies on issues such as health care and housing.

Her experience of the public health system in Italy, where she lived for seven years, has given her a totally different perspective from many Americans. She recalled having a complicated medical procedure and being amazed when she did not have to pay upon being discharged from an Italian hospital.

“People in Ireland see Trump as a reality TV star and they say to me that they can’t believe he has become the leader of the free world,” said Stefanie. “As an American in Ireland, I get ribbed a lot about Trump. It’s very difficult for me to think of going home if there are four more years of Trump. If I was ever to have a medical complication, I would hate the thought of moving home.

“I voted loud and proud for Bernie Sanders today. I think people living abroad have a different perspective. I left when I graduated when I was 22, so I have spent my entire adult life outside the US. Living abroad has absolutely changed my perspective. People say that Bernie is not moderate enough, but we (Democrats) ran a moderate the last time and look at what happened!”

Stefanie said that a vote for Joe Biden would be for “more of the same” when there is a need for real change in the US, but she would be prepared to vote for him if he wins the Democratic primary. 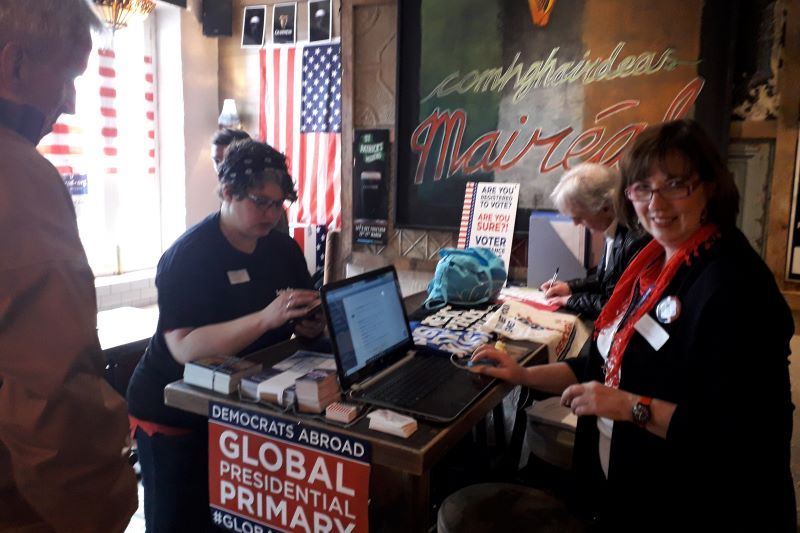 A native of Austin, Texas, April Kling Meyer made the five-hour round trip from Cavan to vote in the Galway primary.  She was delighted that Democrats Abroad Ireland had given her the opportunity to take part in the process.

“It’s great to be able to stay informed and connect with like-minded people. It has been extremely beneficial for us because a lot of what we are seeing in the US is stuff we don’t want to see. I have been involved with Democrats Abroad Ireland since even before I moved here. It makes things like this much easier,” she said

Ms. Meyer was an Elizabeth Warren supporter until she dropped out of the race last week and she has transferred her allegiance to Sanders.

“I think it’s all propaganda about Bernie being too far to the left to win the election. Compared to the rest of the world, the US is highly conservative. A lot of people we call Democrats in the US would be considered conservatives in other countries. Bernie is advocating for the types of policies that we would call ‘table stakes’ in Ireland or in Europe,” she said.

“People have the right to health care without going broke. People should have the right to housing without some absurd amount of money to be able to afford it. I like that Bernie is advocating for public schools and unionisation of labour. My husband has a pre-existing health condition. He would be uninsurable back in the US.”

Like Stefanie, she would be prepared to vote for Biden if he wins the Democratic nomination.

“I will vote for Biden in November if I have to, but he is not really a true progressive or liberal. I think he would be better than Trump, but I don’t think there’s a whole lot worse than Trump right now,” she said.

Read More: Bernie Sanders is no friend of Hispanic or Irish immigrants

A Galway man who lived in New York for 13 years, Francis Stevens, also said he was voting for Sanders. Stevens took part in the last Democratic primary in Galway four years ago and said he knew Hillary Clinton would struggle to beat Trump after meeting fellow US citizens at the 2016 primary.

“I knew Hillary was in trouble on this day four years ago. Bernie won 75% of the vote in Galway that day. I would see Biden as part of the Clintons’ circle. I did vote for Hillary the last time, but I voted for Bernie Sanders today. When it comes to debates and things like that, I think he has a better chance against Trump than Biden,” he said.

Laura Painter from Maryland has been living in Co Clare for 20 years. She travelled by car with her teenage son Quin, a first-time voter, to vote in the primary at McGinn’s. Laura admitted that her Irish friends and neighbours often ask her about President Trump and question how he became President of the United States.

“I have been living in Ireland for 20 years. I cringe when I think about Trump. I would feel embarrassed. I don’t think Americans see how the rest of the world sees Trump, which is quite a problem,” she said.

Democrats Abroad Ireland also held a primary in Dublin on Tuesday, but post-graduate student Cody Dorsey (Baltimore, Maryland) could not make it as he was visiting Scotland for a few days. So he hopped on a bus to Galway in order to take part in the voting on Saturday.

The 23-year old is studying Politics in Dublin. He took the opportunity to combine his first-ever visit to Galway with a vote for Joe Biden in the primary.

“As a black American, people literally died for my right to vote. So I will never turn down the opportunity because it is so important to vote and to have your voice heard,” he said.

“Donald Trump is not the only thing on the ballot in this election. Criminal justice reform, foreign relations, and education are on the ballot and we are really fighting for the soul of America, the soul of our democracy. I am really honoured that I have the right to vote.”

Dorsey valued Biden’s track record as Vice President and as a person who can get things done. He voted for Hillary Clinton in 2016. He also questioned Sanders’ ability to deliver in Congress and whether he could get things done.

“We need more than politicians who are going to give people good talking points or make pie in the sky promises,” he said. “Joe Biden is a person who has loyally served as the Vice President of the United States, who has been one heartbeat away from the presidency. This is someone who can hit the ground running on day one.

“Biden is willing to learn and listen to people. He does well with African-Americans because he is in those communities, he meets those communities, and he has proven himself to be a leader. This election is really about beating Donald Trump.

For organiser T.J. Mulloy, of Democrats Abroad Ireland, the decision to hold a primary in a Galway pub on a Saturday afternoon was a huge success. They were busy dealing with voters for the entire four hours.

“We were absolutely delighted by the number of people who turned up here today and the level of engagement. It was a real case of democracy in action. We had a steady stream of people throughout the afternoon and it exceeded all of our expectations,” he said.