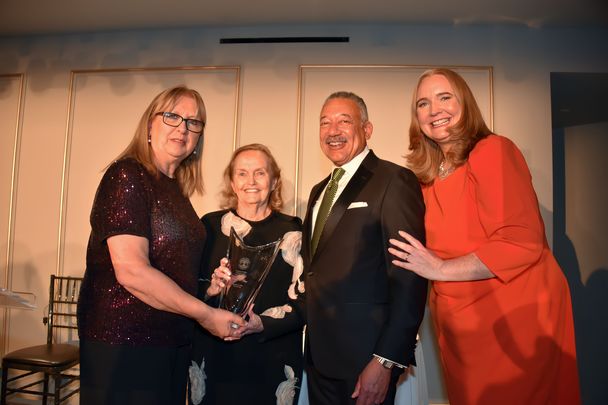 A thought-provoking evening of stunning performances, joyful moments and the sense of a movement taking flight! pic.twitter.com/cfmhrnmugX

McAleese’s address was titled “Widening the Lens of History: A New Future from a Recast Past.” She said, “We do not revise history for the sake of it but forge new collaborations to tell it anew for the sake of truth, inclusion, equality in our time – to right the record, to right the old catalog of wrongs, to repair where we can and take responsibility where we must. Above all to learn. And above all to heal. For there is much to heal.”

Taoiseach Micheál Martin praised the work of the African American Irish Diaspora Network's (AAIDN) and its founder and chairman Dennis Brownlee when he paid tribute to the honorees via video from Dublin.

Among the notables in attendance were CNN’s Donie O’Sullivan, and authors Kia Corthron and Colum McCann. New York University, University College Dublin, Notre Dame University, Sacred Heart University, and Quinnipiac University were all represented, as were the diplomatic corps of Ireland and Northern Ireland.

The AAIDN’s mission is to foster relations between African Americans and Ireland based on shared heritage and culture.

Proceeds from the event support initiatives to develop scholarship opportunities in Ireland and at Historically Black Colleges and Universities (HBCUs), as well as activities that amplify the artistic and cultural dynamism of the African American and Irish artists. The AAIDN also supports the Black, Brown, and Green Voices program which originated at New York University in 2019.