As enraged Trump supporters stormed the Capitol Building, CNN's Donie O'Sullivan became quite the hit back in his native Ireland. 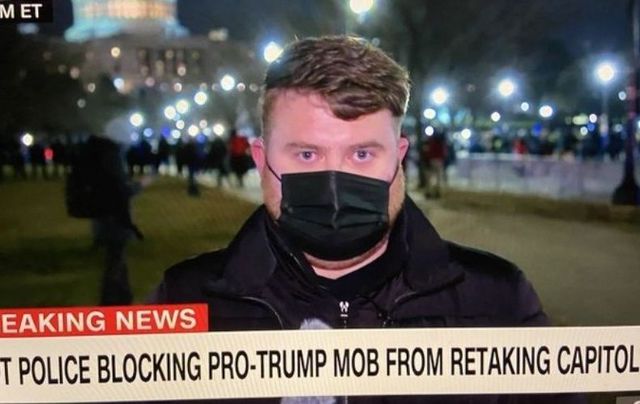 CNN's Irish reporter Donie O'Sullivan has gone viral on social media after he starred in the network's coverage of the unrest in Washington DC on Wednesday.

While most people in the world watched on in horror as the large group of Donald Trump supporters launched an attack on democracy, most people in Ireland were transfixed by O'Sullivan's calm reports amid the protests and hostility towards journalists and reporters covering the event.

O'Sullivan, a US citizen who is a native of Cahersiveen in Co Kerry, earned widespread praise on social media for his reporting from the scene as he relayed the news back to veteran CNN host Wolf Blitzer in studio.

O'Sullivan even had the nerve to criticize the volatile rioters while standing amongst them, earning him adulation for his bravery and honesty.

His reporting saw #Donie trending on Twitter in Ireland late last night and earned him the praise of fellow CNN reporter John King, the network's chief national correspondent who previously won the affection of the Irish people for his coverage of the presidential election with his "magic wall".

One Twitter user joked with King that his love affair with Ireland was over thanks to Donie O'Sullivan's newfound fame and popularity, but King simply replied by saying that the Irish reporter was "awesome".

Here's how one Twitter user summed up the Irish sentiment towards O'Sullivan on Wednesday:

CNN: “We’re now going to go to Donie O’Sullivan whose on the ground for us”

Other Irish Twitter users were quick to heap praise on O'Sullivan as Trump supporters laid siege to the Capitol Building.

Irish screenwriter Declan Lawn, for example, joked that O'Sullivan was able to remain calm because he had seen much worse in Irish nightclubs:

Another Irish Twitter user also claimed that O'Sullivan's Irish upbringing made him impervious to the threats of Trump supporters:

With thousands of messages flooding in to support O'Sullivan on Twitter, the reporter said that he was "overwhelmed by all the love from Ireland".

Overwhelmed by all the love from Ireland tonight. ☘️ ❤️ https://t.co/rKCksNFxkk

O'Sullivan has been working as a CNN reporter for more than five years after previously holding a position with Storyful in New York and Dublin for two years.

He graduated from University College Dublin with an undergraduate degree in history, politics and international relations before completing a master's degree in political science and government at Queen's University Belfast.