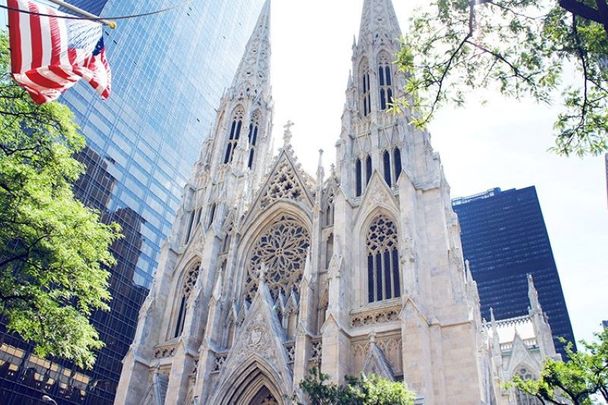 Cardinal Timothy Dolan, Archbishop of New York, will celebrate Mass on March 17, 2021, Saint Patrick’s Day, at 8:30 am EST in Saint Patrick’s Cathedral, in honor of the Patron Saint of the archdiocese.

Bishop William Murphy, the retired Bishop of the Diocese of Rockville Centre, will be the homilist.

The Cardinal also intends to greet members of the famous “Fighting 69th” infantry regiment outside Saint Patrick’s Cathedral at approximately 7:45 am EST prior to the start of the Mass.

The tradition dates back to 1851 when the battalion was asked to lead the annual parade of Irish Catholics in case of anti-immigrant violence.

In 2018, Army Lt. Col. Don Makay, commander of the 1st Battalion, said that the unit “continues to reflect the immigrant nature of the city, although that immigrant is no longer just Irish, but from many different countries.”

All health and safety protocols will be observed at the St. Patrick's Day Mass, including mask-wearing and social distancing inside the Cathedral.

The Mass will be broadcast here on IrishCentral via the Cathedral’s YouTube and it will also be on The Catholic Channel, Channel 129 of Sirius XM Satellite Radio.

St. Patrick’s Cathedral on Fifth Avenue in New York is the largest Gothic Roman Catholic Cathedral in the United States.

The cornerstone of the Cathedral was laid in 1858.

The Cathedral was named after St. Patrick, the patron saint of Ireland, in response to the increasing numbers of Irish immigrants in the city.

The church takes up one whole city block. The spires rise 330 feet above street level. It seats 2,400 people.

The Cathedral has 21 altars and 19 bells, each named after a different saint.

It has more than 2,800 stained glass panels.

Eight Archbishops of New York are buried in a crypt under the high altar.

In normal times, there are between 18 and 15 masses said every day, and 150 weddings every year.