Irish chest beating it was not. Cahill's best-selling book told the profound story about the hidden history of the Irish monks who kept the fires of Christian learning alight during the Dark Ages. 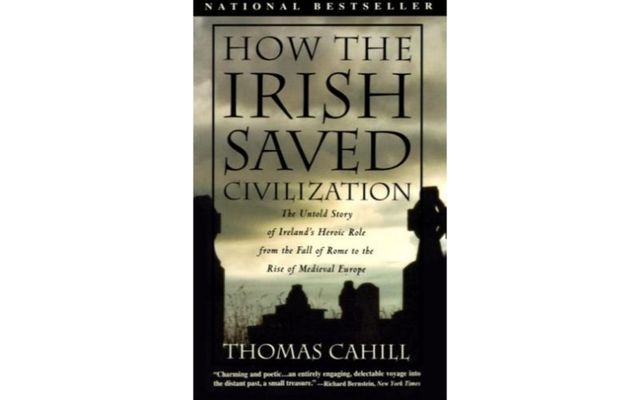 "How the Irish Saved Civilization" by Thomas Cahill.

Thomas Cahill’s book, "How the Irish Saved Civilization", spent two years on The New York Times bestseller list and sold over two million copies. Cahill passed away on October 18 at 82, leaving an amazing legacy and history behind.

A quiet presence in public, with deep personal faith, Cahill was an unlikely first-time author to strike it big.

Yet behind the quiet countenance was a man of single-minded mission – to restore the truth of the forgotten work of legions of Irish monks in saving western civilization.

His book was rejected by five publishers before finding a home at Doubleday.  The word was the other publishers expected a book of blarney about the Irish and, true to the stereotype, rejected the manuscript.

But a work of bog Irish chest beating it was not.  Instead, "How the Irish Saved Civilization" told the profound story about the hidden history of the Irish monks who saved absolutely priceless Latin texts, translated them and published them and kept the fires of Christian learning alight during the Dark Ages after the fall of the Roman Empire.

Cahill wanted to write the book, he said, to get the record straight.  History, he noted, was written by the victors, usually from powerful countries like Britain who won all the battles and rarely from the perspective of the dispossessed.

Thomas Cahill has died, aged 82. I met him once. Fine scholar, writer with a crisp, humorous style, and one of the foremost contributors to Ireland's legacy. RIP. pic.twitter.com/qADEZ3GrF6

The fact that Cahill’s book was an explosive bestseller, despite being about an arcane topic such as Irish monks preserving lost masterpieces, was also a tribute to his writing style, and beautifully crafted arguments in support of his thesis.  Fluent in several languages, he presented the history of the world from an Irish perspective for the first time.

The opening chapter of "How the Irish Saved Civilization" is unforgettable.  The year is 460 AD, and Pax Romana has ruled the known world for 11 centuries. The Roman Empire appears to be in its prime and unassailable with the finest army known to man.

But internally the empire is creaking, corruption has taken its toll and tens of thousands bribe their way out of mandatory service in the mighty Roman Army.  So bad is the corruption that slaves have been conscripted to fight and the dregs of society from every corner of the kingdom (think present-day Russian Army under Putin.)

Outside the gates, the barbarians, starving hungry tribes with no concept of democracy merely of survival, gather but are kept at bay.  In modern parlance, the Third World is about to come crashing in on the First World.

Then comes the fateful winter when the river Rhine freezes, and suddenly the Germanic tribes can walk across a land bridge and face an enemy long kept apart by the Rhine and Danube rivers.

The rest is history.  The desperate hordes overcome the mighty Roman Army and soon are at the gates of Rome itself. It is the end of the empire.

But, as Cahill writes, the chaotic events were about to turn into Ireland's greatest moments.

Proselytized and Christianized by St. Patrick, the Irish monks take matters into their own hands and recover most of the sacred Latin texts from monasteries all over Europe and other places where they have been relocated.

While the dark ages thunder the Irish, unaffected, complete the copying and recreation of the texts which are restored to their rightful place in antiquity at the end of the Dark Ages.

Cahill’s book sparkles with story after story of the amazing monks who achieved the impossible.

Their work kept the Judeo-Christian tradition alive in Europe, Cahill discovered, and he wrote an extraordinary account of their accomplishments and in turn, showed the Western World the vital part played by Irish monks in its survival.

If you haven’t read "How the Irish Saved Civilization", I highly recommend it.