Did Irish monks build these ancient stone structures in Connecticut?

Located in Groton, Connecticut, Gungywamp is a site consisting of stone chambers, rings of stones, piles of rock, and ancient artifacts that continues to mystify archaeologists. 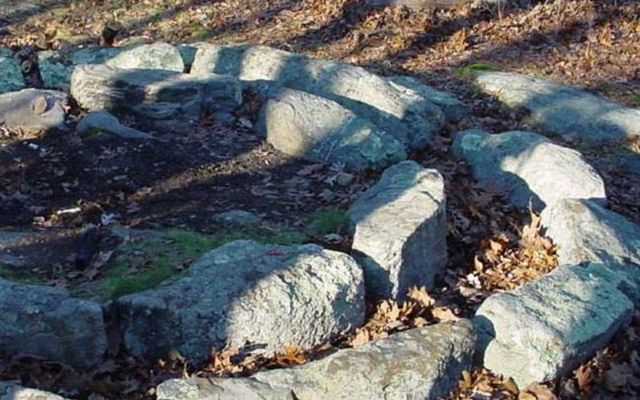 An ancient site located just an hour outside New Haven, Connecticut, may have been built by 6th-century Christian monks who escaped Ireland to avoid aggressive Viking settlers.

Located in Groton, Connecticut, Gungywamp is a site consisting of stone chambers, rings of stones, piles of rock, and ancient artifacts that continues to mystify archaeologists.

Most artifacts recovered from the 55-acre site are from the Colonial period, leading some experts to believe that the site consists of dry masonry shelters built during the 17th and 18th centuries.

Digs at the site have uncovered a penny dating back to 1742 in addition to shards of Colonial china and pottery.

The Gungywamp site can be divided into a north and south complex, which both contain high cliffs, swamps, brooks, and stone structures, including chambers, bridges, and stone standing rows.

The only other artifacts recovered from the site have been Native American, leading experts to declare that the evidence at Gungywamp points to the fact that it was a Colonial site.

Others, however, aren't so sure and claim that the site was built by ancient Irish monks who traveled to North American between the 6th and 8th centuries AD.

The monks allegedly made the perilous journey across the Atlantic Ocean to escape Ireland's Viking invaders.

David Barron, an avocational archaeologist based in Groton, told the New York Times in the 1990s that there are seven petroglyphs (rock carvings) at the site that are consistent with a style of Roman-Briton symbols dating between 500 and 700 AD.

Barron founded the Gungywamp Society in 1979 to preserve and protect the historical site and said that the theory could rewrite the history of European settlement of the New World.

Barron was supported by archeo-astronomer Vance Russell Tiede, who promoted the theory in both Ireland and the United States.

"We're talking about what is perhaps the greatest find of this century and one of international significance," Tiede told the New York Times in 1995.

Barron told the paper that he believed that there was "sufficient data to warrant professional investigation" and called for an "open-minded approach" to the theory.

The seven carvings that Barron referred to include four Chi-Rhos - a capital P with a capital X through its stem that is still used by major Christian religions today - and a Byzantine Greek symbol chiseled into a stone.

The other two petroglyphs include an upper-case R and a lower-case R, while a profile of a heraldic eagle was chiseled into the face of several standing stones in a fashion uncommon to the Colonial era.

"The Irish monastic church would use the eagle as a symbol of St. John," Tiede told the New York Times.

Barron added that the discovery of the petroglyphs had a "heavy impact" on how he viewed the site.

Barron said that a carbon-14 reading taken at the site in 1991 further influenced his theory, stating that a sample taken from a circle of stones at the site dated back more than 1,000 years.

He said that the circle was a "tan bark mill" used to crush bark that was used to cure animal skins.

The use of animal skin was significant, Barron said, since ancient Celts used leather to line their boats rather than wood.

Barron and Tiede also pointed to a letter written in November 1654 by John Pynchon of Springfield, Massachusetts, as evidence of pre-Colonial settlement of the site. Pynchon wrote of strange reports of a "stone wall and strong fort" at the site, implying that the settlement was pre-colonial.

Tiede added that the largest structure at the site, which measures 14 feet long, 10 feet wide and six-and-a-half feet in height, is remarkably similar to the 200 oratories built by Anchorite monks throughout Ireland.

He said that the sun comes through the doorway at sunrise on the first day of spring and strikes the opposite corner of the chamber, while it comes through a window at sunset and lights up a side chamber. Tiede said that he observed similar occurrences in oratories in County Kerry.

Tiede and Barron's theory also aligns with St. Brendan's mythical voyage to North America, which is believed to have taken place between 500 and 700 AD.

The discovery of a 10th-century Viking settlement at L'Anse Aux Meadows in Newfoundland has given further credence to the theory that early Christian monks were capable of traversing the Atlantic Ocean.

However, Kenneth Feder, an anthropology professor at the Central Connecticut State University in New Britain, stated that the presence of Irish monks at Gungywamp was doubtful.

"Where's the evidence they were there?" Feder told the New York Times.

"There are no food remains, no trash remains. I don't care how obsessively neat monks are, people lose things, and they lose things that are culturally diagnostic. They never lost a tool or an iron hammer?"

Feder added that the seven petroglyphs are not sufficient evidence to suggest that monks lived at the site, while the carbon-14 readings at the "tan bark mill" could be attributed to a forest fire that took place more than 1,000 years ago.

He said that the Pynchon letter was hearsay from a time when rumor and speculation were rife and also dismissed the evidence of the solar chamber.

Feder penned a letter to Tiede to point out that the site was located in a mature forest and that it was impossible to plot sunrise and sunset positions under so much cover. He said that Europeans described the forest as "having such a thick canopy that when riding throughout it, it appeared to be night in the middle of the day".

His doubts notwithstanding, Feder did not dismiss the theory outright and admitted that it was possible that Irish monks inhabited the site.

"Is it possible? Yes, because there's nothing inherently impossible about that. Could ancient Irish monks have gotten in boats and sailed across the Atlantic to Gungywamp? Yes," he said, pointing to the fact that Irish monks settled in Iceland before Vikings did.

However, he said that it was "highly improbable" due to a lack of evidence.