The secrets of The Book of Kells

The Book of Kells is one of Ireland’s great treasures is also a European cultural icon and is among our top ten tourist attractions. 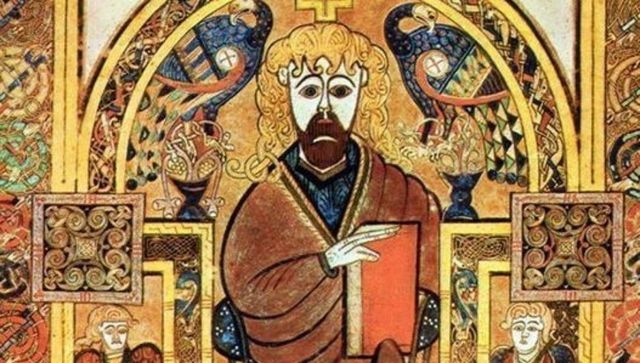 Illustration from The Book of Kells Trinity College Dublin

The Book of Kells, one of Ireland’s great treasures is also a European cultural icon and is among our top ten tourist attractions.

The Book of Kells, one of the great treasures of medieval Europe, is an illuminated manuscript Gospel book in Latin, containing four Gospels of New Testament (Matthew, Mark, Luke, and John) together with various prefatory texts and tables. It was created by Celtic monks sometime around 800 AD.

It is a masterwork of Western calligraphy, employing decoration that is not only extraordinarily rich and colorful but also, in places, deeply enigmatic. It is widely regarded as Ireland’s finest national treasure.

The Book is on permanent display at Trinity College Library in Dublin. The library usually displays two of the current four volumes at a time, one showing a major illustration and the other showing typical text pages. 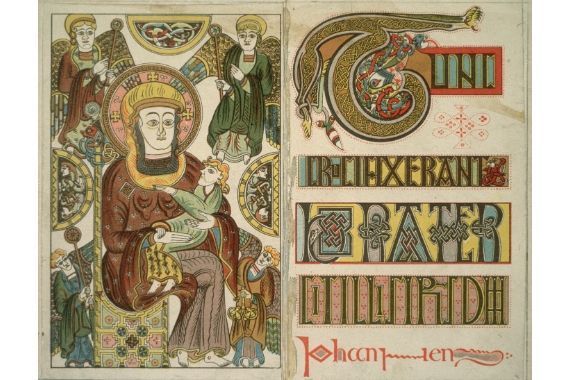 The Book of Kells

The manuscript contains four Gospels in Latin based on a Vulgate text, written on vellum (prepared calfskin), in a bold and expert version of script known as “insular majuscule”, referring to the style of art produced in the post-Roman history of Britain.

The illustrations and ornamentation of the Book of Kells surpass that of other Insular Gospel books in extravagance and complexity. The decoration combines traditional Christian iconography with ornate swirling motifs typical of Insular art. Figures of humans, animals, and mythical beasts, together with Celtic knots and interlacing patterns in vibrant colors, enliven the manuscript’s pages.

“Little did monks who labored on this magnificent masterpiece consider that twelve centuries on, their work would be one of Ireland’s top tourist attractions.” 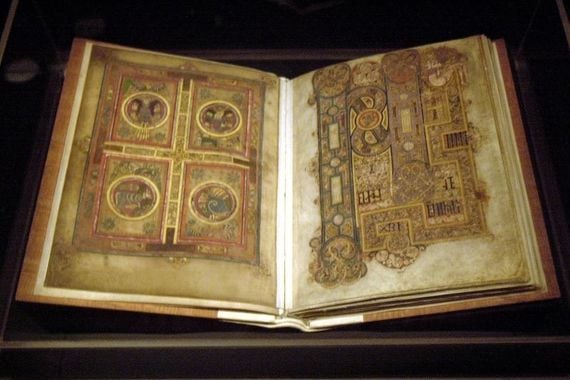 The Books of Kells

Many of these minor decorative elements are imbued with Christian symbolism and so further emphasize themes of major illustrations. While the book takes its name from Abbey of Kells in County Meath, its place of origin is generally attributed to the scriptorium of the monastery founded around 561 by St Colum Cille on Iona, an island off the west coast of Scotland.

Colum, or Dove of Church, was known to the Latin-speaking world as Columba and was a direct descendant of Niall of Nine Hostages, legendary grand chieftain of Donegal. Because of his influence, priceless work is also referred to as Book of Columba. In 806, following a Viking raid on Iona which left 68 of the community dead, Columban monks took refuge in a new monastery at Kells, County Meath.

It must have been close to year 800 that Book of Kells was written, although there is no way of knowing if the book was produced wholly at Iona or at Kells, or partially at each location.

It was never finished, for reasons unknown, and some folios are missing. At some stage, fearing further Viking raids, monks buried it in the ground. It was also stolen for a period, with its bejeweled front and back cover torn off when it was recovered. It was deposited for safekeeping in Trinity College around 1653. It has been on display in Old Library at Trinity since mid 19th century. Little did monks who labored on this magnificent masterpiece consider that twelve centuries on, their work would be one of Ireland’s top tourist attractions. It is indeed a wonderful gift from our past.