NYC cab driver John McDonagh finally got the two pints of Guinness at Gaffney and Son Pub in Dublin that were promised to him as an IOU nine years ago. 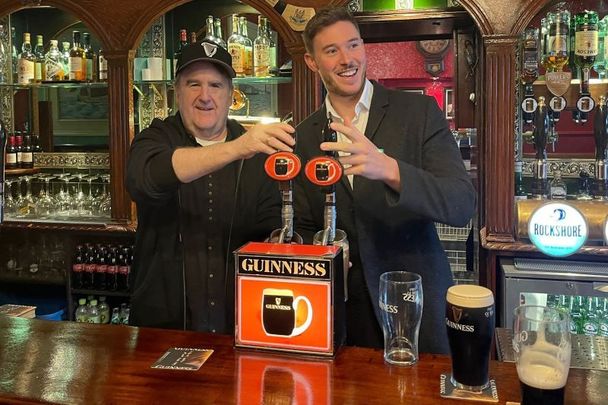 John McDonagh, left, finally gets his two pints of Guinness promised to him by Shane Gaffney nine years ago. Facebook

It took nine years for Irish American New York cab driver John McDonagh to finally collect a fare from a broke Irish customer, who vowed to pay his debt with two pints if McDonagh ever happened to be in Dublin. The pint handover finally happened last week.

Two of the most famous pints of Guinness ever served were handed over to Irish American cabbie-playwright John McDonagh in Dublin last week, nine years after he accepted an IOU from a young Irishman who hailed his cab but didn’t have money to pay.

The paying of the pints, thanks to McDonagh’s media savvy, grew into a feel-good story picked up by multiple outlets throughout Ireland fascinated that McDonagh kept an IOU written by Dubliner Shane Gaffney, who had no cash or a working credit card when he hopped into a New York City cab one early morning in 2013. The sheet of paper promised the cabbie two free pints at Gaffney and Son, the pub on the outskirts of Dublin city center owned by Shane’s father Paul, and McDonagh was determined to one day collect his fare.

The time finally arrived last Wednesday, September 28, when McDonagh pulled up to Gaffney’s in a cab ordered for him by the Guinness Storehouse, Ireland’s most popular tourist attraction, which had invited McDonagh for a free tour and a pint.

“I came over here to do my play, but it feels like I had to crowbar the shows in with all the attention on the pints,” McDonagh, 68, told the Irish Voice, sister publication to IrishCentral.

McDonagh did indeed get to perform his show, "Off the Meter, On the Record," to three sold-out audiences at the Sean O’Casey Theatre, after meeting Shane Gaffney and enjoying a surprise visit from some relatives from Tyrone who journeyed south to Gaffney’s to watch the pint handover.

But before that, McDonagh was a guest of the Guinness Storehouse for a tour which included a personalized pint glass and, of course, a drink at the famous bar. But McDonagh kept it booze free and sampled a new, non-alcohol offering from the famed brewer instead.

“I told the guy giving me the tour that I can do two things when I’m in Dublin – I can either drink or do my play, but I can’t do both,” the sensible cabbie-playwright said.

Just checking if this happens to every American that lands in Dublin - the first email you get on arrival is from...

The cab driver who took McDonagh to Gaffney’s said that a bunch of local drivers were talking about the two pints story on their WhatsApp chat group. When he finally pulled up to the pub in Fairview, the Gaffney family was more than happy to finally make good on Shane’s cab fare.

“So they had a big banner outside welcoming me. And one of the first people to greet me inside was my friend Brian Mallon, an actor who used to live in New York. And then some of my relatives from Tyrone were there. It was pretty crazy,” McDonagh says.

Shane, who now lives in Belfast, was there; so too were his parents, owners of the pub. The pint pulling was done not only by the Gaffneys but McDonagh himself.

“I did have a few sips. They were good,” McDonagh said.

“Shane remembered me and recognized his handwriting from the IOU. But it didn’t really sink in until he saw an Instagram video I made which said I was coming over for my pint.”

Paul Gaffney enjoyed the publicity over the two pints, and told McDonagh it was a funny diversion from some of the other problems small businesses in Ireland have to contend with.

“Electric prices are going crazy there and there’s a lot of doom and gloom, so to have something to laugh about is good,” McDonagh says.

“Shane’s mother wanted to know what her son was doing in a New York City cab at four in the morning. I told her I was picking him up from his volunteer shift at St. Vincent de Paul, and of course, he hadn’t been drinking one bit.”

McDonagh went from being the toast of Gaffney’s to playwright/storyteller with his three sold-out shows. Now he’s en route to Donegal, birthplace of his parents where he spent chunks of his childhood, to perform his show at a theater in Ballyshannon – and to conduct more local media appearances.

“The attention has been pretty wild for sure. But all has been good and I haven’t messed up – Ciaran O’Reilly (Irish Repertory Theatre co-founder who worked with McDonagh on his play) would kill me if I messed up my lines,” McDonagh says.

The traditional matchmaking games Irish girls would play at Halloween