John McDonagh will broadcast live from the Dublin pub Gaffney and Son, the owner of which promised him two pints of Guinness in exchange for a cab ride in NYC nine years ago. 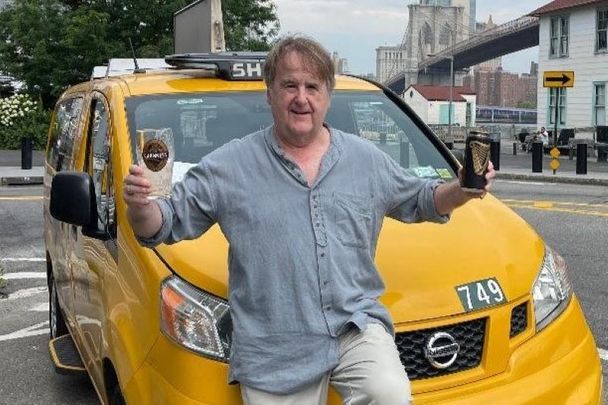 John McDonagh, an Irish American taxi driver in New York City, let an Irish tourist pay for a ride with the promise of two pints in Dublin. John McDonagh

It's time for a Dublin publican to finally pay his fare, nine years after getting a free Manhattan taxi ride from a kindly Irish American cabbie who took pity on the broke Irish tourist who, instead of paying via cash or credit, offered the cabbie an IOU for two free authentic pints of stout in Ireland instead.

John McDonagh, playwright, radio host, and long-time New York cab driver, is heading to the land of his ancestors at the end of September for two equally important reasons – he’s debuting his autobiographical play "Off the Meter, On the Record," and perhaps more significant, he’s thirsty for the two pints of Guinness he was promised by Shane Gaffney, the tourist who hailed a yellow cab driven by McDonagh but came up short on the fare.

“Just like Garth ‘Slobbering’ Brooks, I have sent over part of my stage. The checker cab has made its way to Gaffney and Son for a photo op with the owner before I arrive for my two free pints. The only people crying when I get there will be the audience from laughter,” McDonagh told the Irish Voice, sister publication to IrishCentral.

Gaffney is the owner of Gaffney and Son, a pub in Fairview, just outside of Dublin city center. And he’s happy to finally pay his debt says McDonagh, the son of immigrants from Co Donegal.

“We have communicated by Instagram and someone from the fine establishment will be coming on my radio show,” McDonagh adds. “These two free pints of Guinness will cost me $350 each as I am taking Aer Lingus to get them. There has to be a cheaper way to drink Guinness."

McDonagh will broadcast his show live from Gaffney’s on Wednesday, September 28. He’ll perform his autobiographical play about life as a New York City cabbie, which had a successful, critically acclaimed run at New York’s Irish Repertory Theatre before the pandemic, for two nights in Dublin, and one in Donegal.

“Dublin Live radio will cover this historic event live at Gaffney’s. Word on the street is the story will push the Queen off the front page,” McDonagh says.