We’ll see you down the road -  A tribute to Mick Moloney, from the Executive Director of the Irish Arts Center. 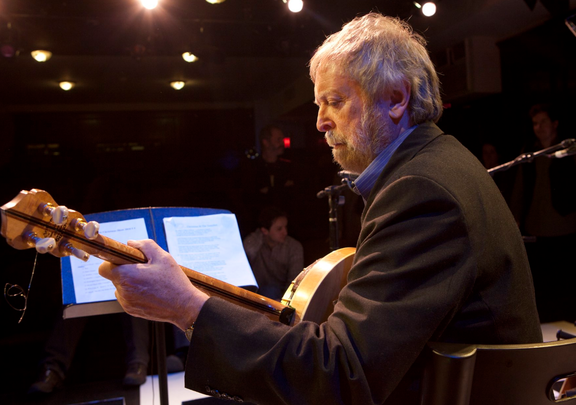 Aidan Connolly, Executive Director of the Irish Arts Center, in New York, pays homage to the incredible life's work and talent of the Irish musician and historian Mick Moloney who sadly passed away in July 2022.

This past Saturday I stood at the tip of the island of Ireland – at Malin Head in County Donegal – and tried (again) to wrap my head around the profound and sudden loss of our friend and longtime partner in cultural adventures, Mick Moloney.  Just a few days before I sat stunned in a friend’s cottage in Rostrevor, County Down when I heard the news.  It seemed fitting that the Fiddler’s Green festival was happening in town that weekend, headlined by Tommy Sands, just one of the countless artists Mick would introduce us to over 15 years of working together.

I met Mick in my first few weeks on the job as the new Director of Irish Arts Center in 2007.  He had received a Rockefeller grant to create a concert documentary with Oscar-winning filmmaker Paul Wagner about traditional Irish music in America called Absolutely Irish, and Irish Arts Center was the nonprofit repository for the grant and the venue.  The experience was a brilliant, tuneful, story-full (and, occasionally, delightfully shambolic!) introduction for me to the Irish traditional music scene Mick anchored, and a powerful, inspiring example of the musical memories that could be created in that magical space with the right ingredients and resources.

Much has been written about Mick’s phenomenal impact on the field of ethnomusicology and on the hundreds of musicians with whom he worked over the years.  His ability also to impact the trajectory of creativity for the many arts institutions with which he intersected cannot be overstated.  Indeed, Absolutely Irish would be the first of more than 50 projects we would embark on together, yielding more than 120 performances over those fifteen years, and an important step in our journey to position Irish Arts Center, hitherto better known as an Off-Off-Broadway theatre and community center for classes in Irish culture, as a cracking music venue, animated by collaboration and intercultural connection, as part of our broadening multidisciplinary mission.

A few days or weeks after we wrapped Absolutely Irish, I got an email from Mick – picking up a conversation we’d had during the filming where he’d probed, with his (usually!) gentle interrogative style, my vision for IAC – suggesting we create a context to invite one of his many former collaborators, the great Paul Brady, to do a residency.  The idea was that Paul would work in collaboration with another artist, perhaps from another musical style, or generation, or both.  I was already a Brady fan but hadn’t known that one of the myriad chapters of Mick’s robust musical life included a stint with him in the Johnstons.  “Amazing idea,” I wrote, “but who can get to Paul?” I asked.  “Leave it with me”, he said.

Some weeks later, following a series of correspondences with Paul, Mick, and Garry West of Compass Records, the residency was set.  Paul chose to work for a week in collaboration with the North Carolina-born singer-songwriter Sarah Siskind, whom he’d met in Nashville, and who had been heavily influenced by his songwriting.  They would share material with each other in advance of their week together, during which they would develop a program to be shared with a lucky one-night-only audience.  Mick would join them midweek for a public chat about the process. The series that would become known as Masters in Collaboration was born.

Masters in Collaboration: Paul Brady Meets Sarah Siskind led to twelve subsequent editions, including Andy Irvine and John Doyle, Iarla Ó Lionáird and Ivan Goff, Bill Whelan and Athena Tergis, Joanie Madden and Seamus Begley, Karan Casey and Aoife O’Donovan, Dana Lyn and Louis De Paor, and many more.  (The thirteenth, featuring choreographers Darrah Carr and Sean Curran, will be presented in our new building this fall).   Even more profoundly than helping birth that particular series, Mick’s curatorial generosity at such a formative moment in our evolution as an organization gave us both credibility and courage to continue to invest in music programming and the environment of collaboration and hospitality that informs our guiding principles to this day.

Mick was excited and inspired by our desire to present traditional music on the concert stage as part of our multidisciplinary programming, and share it with audiences unlikely to find it in festivals or pubs, and he appreciated how the structures and production values of the theatre could help take the experience to another level for the audience.  In 2008, he took the helm of our annual holiday show, An Irish Christmas.  With his musical partner of so many years, the amazing fiddler Athena Tergis, his fellow National Heritage Award winner accordionist Billy McComiskey, and a number of other Green Fields of America stalwarts, we commenced a wonderful twelve-year collaboration and one of Irish America’s beloved annual holiday traditions, and a beautiful live recording that happily preserves the legacy of this great adventure.

Mick helming An Irish Christmas was like a miracle on 51st Street.  He was somewhat ambivalent about traditional Christmas fare but he delighted in surfacing lesser-known midwinter musical gems like “The Bushes of Jerusalem” and “The Wren Song” that touched the heart of the holiday, and we all loved finding ways to expand the show beyond Ireland and Christmas to include other cultures.  Over the years, An Irish Christmas, and its later iteration, Winter Solstice Celebration, yielded ongoing collaborations with such artists as Tamar Korn, who developed with Mick, Athena and company a stunning Yiddish/Irish medley that became a perennial audience highlight; Grace Nono, whose soaring Filipino chants lifted us out of the concert-in-the-kitchen to a cosmic sacred space; and scores of onstage conversations with everyone from Gabriel Byrne, whose interview one night was magically enhanced by snow falling from the Donaghy stage ceiling (as staff feverishly shoveled the roof during a blizzard), to Loretta Brennan Glucksman, to Ellen McCourt, to Colum McCann, to one of Mick’s favorite special guests, his Greenwich Village hairdresser!  All of this was navigated by Maestro Moloney with deftness and aplomb. Year after year, Mick’s musical delights and wryly warm welcome kept audiences coming back each year, lest they’d be missed at the annual holiday soiree.

We made so many memories with Mick over the years in our home on 51st Street – and even more in our uptown “home” at Symphony Space, which we rented for larger shows like If It Wasn’t For the Irish and the Jews, A Tribute to the Famous McNulty’s, An Evening with Harrigan and Hart, and seven annual Celtic Appalachian celebrations.  Mick and I both enjoyed long friendships with the late Isaiah Sheffer, founder and artistic director of that great Upper West Side cultural home. I used to love watching audiences pour into Symphony Space with Isaiah from his perch at the top of the entrance stairs; we marveled at our amazing communities coming together to enjoy Mick’s musical journeys through the nourishing intersections of Irish American, New York, and world music history.  One of my fondest adventures with Mick at Symphony Space was our Celtic Appalachian show in 2013, which involved a procession of seventy Breton musicians, brought to New York by Charles Kergaravat, parading down the aisles of Symphony Space in a glorious grand finale!

There have been and will continue to be a myriad of testimonials to Mick in the days and weeks and months and years ahead -- each with a powerful story to tell that help compose the mosaic of his astonishing achievements as an academic, musician, bandleader, mentor, and humanitarian.  He was a learned scholar who lived in the trenches of his field, an entertainer whose gems of wisdom were diligently researched (and happily adorned with hyperbole for effect!)  He was insatiably curious and uncommonly generous with what he’d learned and who he’d met along the way.  And he always took care of the audience.

Thus, wherever he intersected our lives – as collaborator, colleague, mentor, teacher, or entertainer – we could all proudly claim him, because whatever or whoever was the focus of his generous, relentless attention, there was nothing more important in the world, and he wanted you to know it.  His legacy is truly vast, and thus so is the sense of loss.

Mick wasn’t much given to sentimentality, but I’ll always remember his signoff at the end of most shows.  After recognizing his fellow musicians and the crew, with a rare earnestness, he would look at the audience squarely, thank them for “lifting us up,” and bid a light, fond farewell: “We’ll see you down the road.”

We were all on the same journey, and everyone had a role to play.  We still do.  Our beloved seanchaí has departed the stage but what gifts he has left within us all to share.