Mick Moloney, often named Irish America's greatest performer and who was considered the greatest historian of Irish music, has passed away. 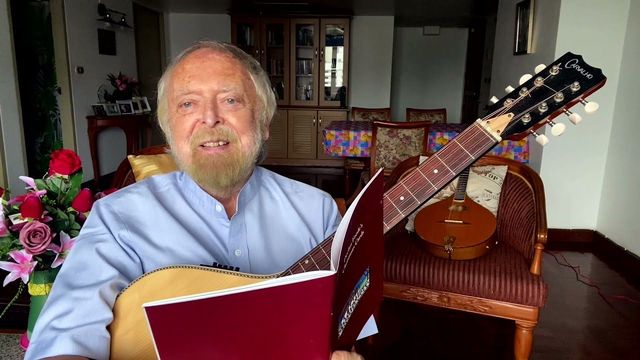 The Limerick-born musician, Mick Moloney, who was 77, had been honored by both the US Government with a National Heritage Award and by the Irish Government with their Presidential Distinguished Services Award for his services to Irish music and heritage.

Mick Moloney was especially drawn to the extraordinary connections music created. Paul Keating, our traditional music writer described one Moloney concert where there was a unique feel.

Keating wrote, “As one of the pre-eminent folklorists in Irish American music history, Dr. Mick Moloney has spent a lot of time in the 19th and 20th centuries studying aspects of performance, especially as it appeals to the Irish emigrant community in the United States.

"I am not sure anyone can juggle a roster of artists like he can in the series of shows he has been doing for the Irish Arts Center."

Here Keating is referring to the "Celtic Appalachia" show, which ran over the St. Patrick's for many years. The last performance was in 2021.

Anticipating the 2013 show, Keating wrote "Once again the Peter Norton Symphony Space Theater will be a veritable three-ring circus celebrating 'Celtic Appalachia II' with an amazing cast of artists from all over under the guidance of the Limerick-born impresario who balances an academic career with his entertainment one.

"For these semi-annual bashes, Moloney usually has enough firepower in his primary ensemble, the 'Green Fields of America', to easily fill a couple of hours.

The stream of Irish music and dance names involved in pulling these shows together is astounding, Athena Tergis, Billy McComiskey, Dana Lyn, Brendan Dolan and Liz Hanley, Tommy Sands, and John Roberts. From the Appalachian tradition also big names such as Dale Jett, Teresa Jett, and Oscar Harris were involved. The shows also offered more contemporary stylings from groups such as Owen and Moley O’Suilleabhain, aka size2shoes along with embracing other traditions such as Breton music and dance.

Of the 2013 show, Keating wrote: "Seeing as this mega-concert occurs on the night on which New York City will hold its massive St. Patrick’s Day Parade it is clear to see Black/Irish influences on each other, especially in music and he considered tap dancing an example of that fusion."

Moloney was delighted at the Irish government convening of the Africa /Irish group.

That Moloney will be missed is an understatement.

As Ted Smyth Chairman of NYU Glucksman House stated: “I can’t believe that the great Mick Moloney, Global Distinguished Professor at Glucksman Ireland House NYU, has died. Such terribly sad and shocking news and a critical loss to Ireland, to Irish America and to Irish music worldwide. A great flame of musical joy and friendship has been extinguished.

"Mick was unfailingly generous in sharing his many talents, only last weekend playing to large crowds at the Maine Celtic Festival in Belfast, including patiently encouraging the young musicians who attended. Mick’s public lectures at Glucksman Ireland House were always packed.

"Although we’ve been friends for decades, I had the pleasure only recently of taking his History of Irish American Music MA class at NYU, relishing Mick’s immense love of research, his inclusivity, his humanity, and his talent for teaching. After class, Mick was always happy to join students for a cuppa tea at a local hostel.

"Mick donated his talents to many public causes, memorably performing online from Thailand for a series of “Irish for Biden” events in 2020."

There will be many occasions to mourn our great loss and to celebrate Mick’s achievements. For now, we send our deepest sympathy to his family.

For Mick it can truly be said, ní bheidh a leithéid ann arís (there'll never be the likes of him again).

Listen to some of Mick Moloney's most popular songs on IrishCentral's Spotify here: