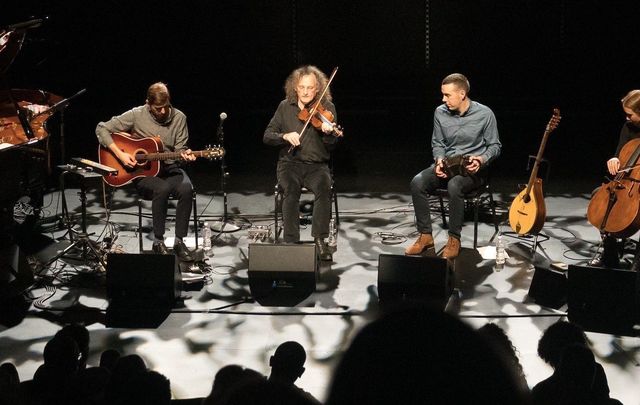 It's not very often – well, in fact, this is a first – that Aristotle has appeared in this space, but a phrase trotted about was attributed to him written some 2,370 years ago in his monumental work Metaphysics with later calculus applied to it by Gestalt psychologists for further interpretation.

The adage “the whole is greater than the sum of its parts” kept ruminating through my mind last weekend as I took in the most recent residency at the Irish Arts Center in Manhattan featuring the virtuoso Clare fiddler Martin Hayes and his latest offering, the Common Ground Ensemble.

A magical week. Thank you to Martin Hayes and the Common Ground Ensemble for filling our theatre with music, our audiences for filling the house, and @culture_ireland for helping to make it all happen.#worldpremiere #newIAC pic.twitter.com/Yb9qtW5ptZ

In helping the brand-new space get off the ground running in its first year, the Common Ground Ensemble performed four shows to capacity crowds from February 3-6 in the second-floor theater that for this show was configured for an audience of 199. Originally the collaboration of five artists was meant to debut at the National Concert Hall in Dublin where it will appear later in the year.

But the pandemic changed the plan, and the Irish Arts Center was able to benefit from the debut performance of the troupe that began simply as thoughts in the imaginative mind of the veteran musician from Maghera in East Clare. Those musings became reach outs over the internet to his potential team that he was amassing along the common bonds of expressive musicality in different genres.

For 25 years or so, we were treated to a marvelous duet of Martin Hayes on fiddle and Dennis Cahill on guitar whose interplay created a new way to enjoy traditional Irish music during that time.  Sadly we won’t see that tandem anymore as Cahill’s health has removed him from performing, but the duo was already an important building block to other larger collaborations like the Gloaming and the Martin Hayes Quartet which gave Hayes greater opportunity to expand what he does musically and, very importantly, for the other artists who are drawn into his web.

Hayes, in his own quiet way, has built an impressive resume as a creative producer and tradition bearing presenter through his recruitment as an artist in residence or director at such highly respected festivals like the Masters of Tradition in Bantry, Co. Cork, the Kilkenny Arts Festival in Kilkenny and the National Concert Hall in Dublin.

In each of those venues, Hayes has surrounded himself with top-class musicians in and out of the traditional realm to assert a proper role that the music he grew up with had an equal standing and appeal with audiences who may not have grown up with it.

All the while he never flagged in upholding his own roots with the Tulla Ceili Band, founded by his father P. Joe Hayes, and the Feakle International Traditional Festival which has staunchly upheld the tradition every year in East Clare.

All that success hasn’t really changed the humble artist who wouldn’t rank too high on the ego scale.  His professionalism and pride in what he is doing has taught Hayes “not to be afraid to let go and to reach for the next thing” he told me over the phone.

In the Sunday night show, he opened with the well-known air and song “Aisling Gheal” composed by Sean O’Riada and sung so beautifully by one of his proteges in West Cork, Iarla O’Lionnard at other times, but in this show was left to interpretation by the Common Ground Ensemble.

To no surprise, Hayes has chosen wisely again with a diverse group of musicians who are recognized for their own virtuosity and performance in different genres.

From Cork, pianist Cormac McCarthy is steeped in traditional music in his family and has developed into a fine jazz musician. Kyle Sanna from Brooklyn is an innovative composer and arranger on guitar known for his work with Seamus Egan and Dana Lynn in various projects.

Kate Ellis, the director of the Crash Ensemble in Ireland originally from Essex in England, is classed as one of Ireland’s foremost cellists. And finally, Brian Donnellan on concertina and bouzouki mirrors Hayes’ own teenage association and family ties to the Tulla Ceili Band.

Hayes wisely chose to be spare in his own introductions to the setlist, yet conveyed just enough information to establish a long continuous thread with the tunes and the people who gave life to them either as composers or interpreters like the aforementioned O’Riada or the far more simple and unique Micho Russell.  He wanted to allow most of the 90-minute show to be a musical conversation among the eclectic ensemble and they were most successful in doing so.

Despite the grandeur of the new theater with its brilliant lighting and sound atmosphere, it almost seemed that they were in such a tight discourse with one another that there was indeed a fourth wall separating them from the audience.  No fear that the audience wasn’t in full tune with what was taking place as standing ovations and steady applause confirmed the collaboration was effective and moving and was off to a great start.

Other special guests appeared over the weekend, but I think the essential quintet satisfied the audiences. Once again, Hayes has proven his genius not only in performance but in his own tasteful and respectful curation of the ould music. Fair play to him and the Irish Arts Center for creating some more common ground.