How the Irish language is being kept alive in New York

A look at Glucksman Ireland House in NYC and their dedication to the preservation of Irish culture. 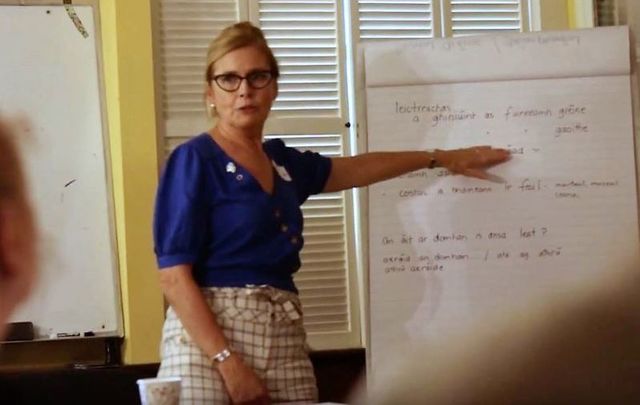 Don't think it's possible to learn Irish outside of Ireland? Think again!

Investigative journalism site City Limits recently visited Glucksman Ireland House in New York City to learn more about Irish language lessons in the Big Apple and the students of the language who are ensuring it is still spoken in the US.

Filmmakers Merel Saarloos and Luke Murphy of the University of Applied Sciences in Utrecht, Netherlands, traveled to Manhattan's Greenwich Village where an Irish-language day (Lá Gaeilge) was taking place.

"In New York’s Greenwich Village, there is a home for Irish culture and the Irish language," City Limits explains. "Glucksman Ireland House NYU is the center for Irish and Irish-American Studies at New York University.

"There are courses that cover a huge array of Irish topics, including the study of the Irish Gaelic language. In their own words, Glucksman House is a 'resource center for Irish, Irish-American, and Irish diasporic culture.'

"Glucksman House hosts many events for anyone with an interest in Ireland, such as weekly public events, a monthly traditional Irish music series and evening Irish language classes for non-students."

Have a look at the video here:

Read More: The beauty of Irish language as springtime blooms

You can read more stories on the Irish language here, and you can learn more about Glucksman Ireland House in NYC here.

Have you taken Irish language classes in the US? How did you get on? Let us know in the comments section, below.