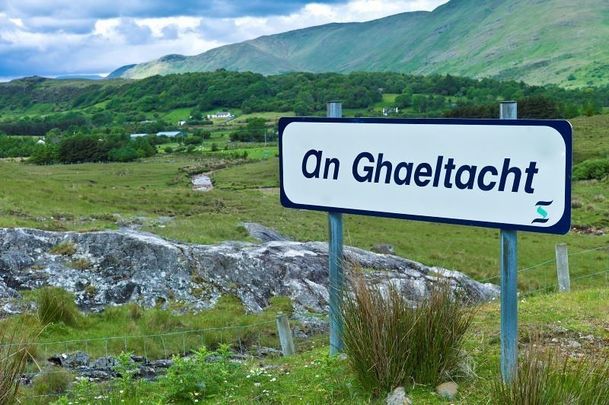 Ireland's official language is Irish, but only a small percentage of the population can speak it fluently and even fewer use it on a daily basis. So is the Irish language hard to learn?

Gaeilge (Irish language), is a compulsory part of the school curriculum for primary and secondary school students in Ireland but once they leave school the vast majority will never speak with their native tongue again.

Is Irish hard to learn compared to other languages?

It is a difficult language to learn. It has so many of its own rules and it can be complicated. But I don’t think it would be any more difficult compared to any other language. It takes getting used to and dedication. And practice, practice, practice!

It’s also just like any other language in that if you don’t get the opportunity to use it you’ll forget it which is a shame. I was fairly confident in using my French after my leaving cert and 12 years on I am just back from a holiday in France and sure I hadn’t an iota of what was being said to be most of the time – “parlez-vous anglais” being my most used French phrase while there!

When it is a hard subject to learn, and for the leaving cert it can be so difficult learning off poems and quotes from books and learning a whole essay that will hopefully fit under a topic, I think kids get an aversion to it and it becomes a chore.

So definitely making it more fun and appealing would encourage kids to develop a "grá" and pride for the language, and then maybe the numbers using it outside of schools and into adulthood might increase.

What are the toughest aspects of learning Irish?

The toughest aspects would be its structure compared to the English language.  For instance, if you were to say “my name is Aoife” in Irish you would say, “Aoife is ainm dom,” which translates directly to, “Aoife is name of me”. This is the same for a lot of the Irish language.

What it comes down to then is practice, the study of the language, and repetition of using the language. This can be picked up easily enough in classes with practice and good understanding.

Grammar then is a whole other aspect that is quite difficult and the writing of the tenses and verbs takes plenty of practice.

It’s all good to learn the technical aspects of this but what can probably be the biggest obstacle then is finding places to use the language in order for you to hang onto the Irish you’ve learned.

Because there is such a drop in usage you really have to make the effort to find ways to use it such as conversational classes, meets-ups, finding others willing to talk to you in Irish, etc.

Are there lots of rules in Irish and are they enforced?

There are lots of grammar rules and tricky pronunciations, some of them just don't make sense!

For example, my name – Aoife. No matter what way you sound it out in the Irish language it makes no sense to pronounce it “ee-fa"!

These kinds of things make it very difficult but you just pick these things up along the way while listening to others and using the language. Irish speakers are very forgiving anyway and no one is out to tell you off for making mistakes. In fact, they are so helpful you'd be surprised and will admire you for your attempts. Just give it a go!

Is Irish spelling easier than English?

Actually, for the most part, Irish spelling is quite easy. Once you know the rules and have an understanding of the sounds most of the spelling is straightforward.

I think growing up we probably just don’t comprehend how hard the English language actually is and don't know any different.

The Irish language doesn’t have silent letters, so many tenses (there are 12 in English!!) or so many alternatives to making the same letter sound.

For example in English, to make the ‘ie’ sound it can be written in so many different ways – ‘ie’, ‘igh’, ‘y’, ‘i-e’ whereas generally in Irish when it comes to spelling it is straight forward enough.

Names are probably the most confusing when it comes to Irish spelling – Saoirse, Caoimhe, Tadgh, Caolfhionn, Ruadh, etc.

Is Irish being taught correctly?

I suppose it depends. What would be great is if people could just have enough Irish to hold a conversation even and get the opportunity to use it.

These days in Ireland there is little need to be able to read or write beyond the basics, especially going through the education system where at the end of the day people go on to colleges, trades, jobs, and so forth where there is no requirement for any reading or writing of the Irish language.

But as it is the language of our people and our heritage it would be disastrous to lose it.

It's also such a beautiful language. I think most people probably leave school having a fairly good ability in Irish but when there is little opportunity or need to use it, it gets lost and forgotten.

For the most part though, I would say it is being well taught. There are fantastic new resources and fun programs to utilize and once the teachers have a passion for it there is no reason why it would not be taught right.

When you move onto secondary school there might be too much emphasis on studying stories, prose, and poems but that’s the nature of the leaving cert and the points system. It would be great if the Irish language could be taught as more of a conversational subject and for enjoyment but I don’t know if that will ever be the case.

What are the best tips to improve your Irish?

The English language is not introduced until Senior Infants. They understand everything being said to them and are fairly confident at speaking Irish after just one year. In getting kids to this stage, repetition is key.

Using songs, games, rhymes - this is so fun for the kids they don’t even realize how much they are learning.

I also teach Irish in the afternoons to parents who want to learn along with their children. We pick a topic a week, learn the basics, have conversations and try and make it a bit fun by throwing in a game or a song and just go for it.

Other ways to absorb yourself would be Irish College, trips to Gaeltachts, and even listening to Radio na Gaeltachta and TG4.

Finding others with the "cúpla focail" and just going for it and using what you can keep the language alive. The most important thing is just to speak it as often as possible.

Advice for people looking to take up Irish?

Just go for it! Find a beginner class and start taking it again. Then when you have the basics make the effort to use it and find a conversational group that meets every so often.

Find others with an interest. Change your phone settings to Gaeilge and send texts as Gaeilge to others who have it. Listen to Radio na Gaeltachta on your way to work. If you have kids learning Irish encourage them to use it at home too and make it fun.

Visit the Gaeltacht and dazzle them with what you have. Learn a few songs "as Gaeilge" and sing them at the sing-song at a wedding. You’ll be surprised too how fast it will all come back to you! Go n-éirí leat!