James Maloney's motion to designate March as Irish Heritage Month in Canada unanimously passed the House of Commons on March 10. 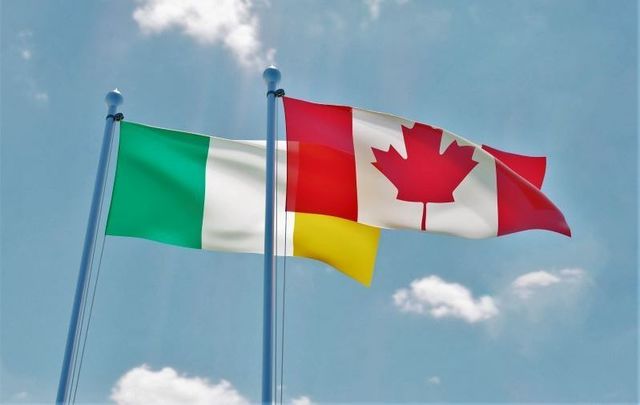 Irish Heritage Month in Canada seeks to recognize the many contributions that Canadians of Irish descent have made. Getty Images

James Maloney,  who represents Etobicoke-Lakeshore in the Canadian House of Commons, is celebrating after his motion to designate March as Irish Heritage Month passed unanimously.

In a tweet on March 10, James Maloney said: “My motion just passed in the House of Commons with unanimous consent.

"The month of March is now officially known as Irish Heritage Month. I am sure my Irish mask from the Legion Branch 101 brought good luck.”

My motion just passed in the House of Commons with unanimous consent. The month of March is now officially known as Irish Heritage Month. I am sure my Irish mask from the Legion Branch 101 brought good luck. pic.twitter.com/8QT0mqkqjo

Maloney’s motion, M-18, reads: “That, in the opinion of the House, the government should recognize the important contributions that Irish-Canadians have made to building Canada, and to Canadian society in general, and should mark the importance of educating and reflecting upon Irish heritage and culture for future generations by declaring the month of March as Irish Heritage Month.”

Maloney introduced his motion to designate March as Irish Heritage Month in Canada back in December, saying: “Today I ask the House for its support for my motion to recognize the month of March as Irish heritage month.

“To start and to be clear, this is not a motion to celebrate Irish ancestry as we do on March 17. Rather, it is a motion to recognize the many contributions that Canadians of Irish descent have made in building this country into what it is today. It is to ask the Parliament of Canada to say thanks and to recognize how much they have contributed.

“This is not to say they do not know, but it is to say that while making these many contributions, the Irish community has displayed a level of modesty that I wish to recognize and thank. They carry the pride of knowing how much they have contributed and I want them to know we know it too.

I was so deeply honoured to have my motion to recognize the month of March as Irish Heritage Month debated in the House of Commons. It has been years in the making and it is one for which I am proud. I was so pleased to have members from the three main Opposition parties (Conservative, Bloc Québécois and the NDP) speak and share their support but here is my speech with the question and answer period that followed.

After speaking briefly about his own Irish ancestry, Maloney said: “I am far from alone in having Irish heritage. According to the latest census data, over 4.6 million Canadian residents lay claim to an Irish ethnic connection. This is 14% of our total population, higher even than the proportion of Irish Americans in the U.S.

“The influence of Irish heritage in Canada and the depth of the Irish's affinity with Ireland is the pre-eminent factor in Ireland’s successful nurturing of its relationship with Canada over decades. Our Irish population almost matches Ireland itself.”

Maloney outlined the historic and rich relationship between Canada and Ireland, which spans politics, business, as well as culture. He also highlighted how Canada became a port of refuge for Irish people fleeing the Great Hunger in the 19th century.

Maloney said: “Working-class Irish immigrants soon became the largest ethnic group in almost every city in Canada. It was not always easy. They faced challenges, as all newcomers do. These challenges were racial, religious and economic, but they persevered. It is a testament to their strength and values. There is no shortage of evidence in every province and every town.

“Irish immigrants helped to build the Rideau Canal, the Lachine Canal, and Saint Patrick’s Basilica in Montreal, as well as the colourful heritage buildings of St. John’s, Newfoundland, just to name a few. Approximately 14,000 Irish citizens moved to Canada each year during the last recession, whether on a temporary or more permanent basis.”

He noted: “The point is that Irish heritage month is not about green beer, funny hats, or shamrocks. It is about honouring the close bond between our two countries that is deep in our past. It is about celebrating a bright future between our two countries. I simply do not have enough time today to cover it all, but there will be a second reading.”

Maloney went on to thank several people for helping in his “own Irish awakening,” as well as his family who he says are equally proud of their Irish heritage.

Concluding, Maloney said: “Again, I ask this House and all its members to support this motion, and as an expression of that gratitude, to declare the month of March from this point forward as Irish heritage month in Canada.”