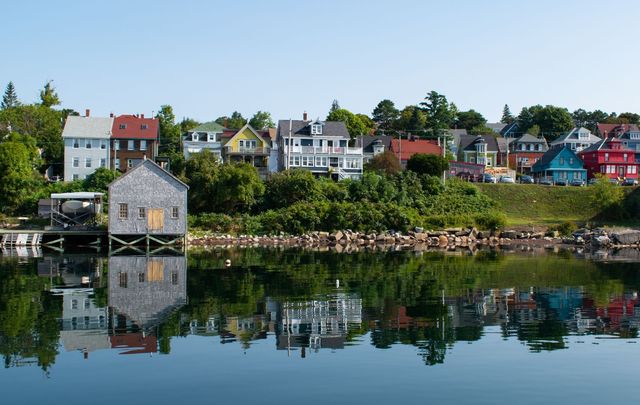 Today, on the third Monday of February we celebrate Nova Scotia Heritage Day when the Canadian region honors the remarkable people, places, and events that have contributed to this province’s unique heritage. And as one in four Nova Scotians are of Irish descent today we celebrate them!

Since the 1660s, the Irish have been part of the great Canadian province of Nova Scotia. Since Roger Casey married an Acadian, and began the Caissy family, at Louisbourg and the founding of the town of Halifax, the Irish were there. In fact, so many Irish were employed at the annual summer fishery along the province’s Atlantic coastline, according to NovaScotia.ca's genealogy archives, "that the entire region was known to them for centuries as Talimh An Eisc (‘The Land of the Fish’)."

While the largest Irish influx to  North America came during Ireland's Great Hunger, in the late 1840s in Nova Scotia the Irish always came. They "arrived in the mid-1700s or between 1815 and 1845, coming not in large groups but quietly, like the snow on a roof." They came especially from the northern counties of Derry, Donegal, Tyrone, and Antrim, often called "Scots-Irish".

It was these Irish who were the founders of Truro and Londonderry in Nova Scotia. Others settled in Chignecto (on the New Brunswick border) and in Granville, New Dublin (near Bridgewater), New Donegal (Pictou) and in parts of Hants County. Archibald, Allison, Parks, Fulton and Creelman are typical family names.

The second wave of Irish arrived between 1815 and 1845.  In the 50 years leading up to 1815, the population fo Irish had doubled. Religious animosity, civil disorder, and the forced union with Great Britain in 1801 all combined, along with the opportunities available in America made the move attractive to emigrants. It was then that Nova Scotia received an influx of Irish from the southern counties of Wexford, Waterford, Kilkenny, Tipperary, Cork and Kerry.

Later Irish arrives were survivors of the Napoleonic Wars, such as the dozens of families who settled central-western in New Ross, East and West Dalhousie, and elsewhere along the old proposed Annapolis Road.

According to the Nova Scotia "By the early 1860s, nearly 50% of the population in the two communities was Irish. The main attraction was steady employment for labourers and skilled tradesmen."

From fishing and farming to building Nova Scotia we know today. As the Shubenacadie Canal began construction Irish masons and carpenters found employment and Irish laborers worked the quarries to supply massive amounts of granite. By the mid-1800s the Irish navvies worked on the construction of the Nova Scotia Railway.

The Irish are literally built into the fabric of Nova Scotia and even today you'll find the Irish influence wherever you look - from the Irish founded villages to the rich Irish musical heritage left behind. The Irish left a rich mark on Nova Scotian heritage and today we honor it.