Tom Ponton, who won $50k from Guinness this past St. Patrick's Day, shares how his Galway granny inspired his prize-winning original toast. 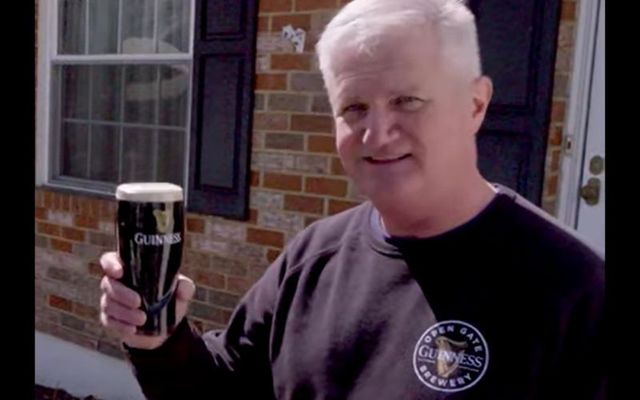 Maryland man Tom Ponton scooped up a cool $50k from Guinness back in March for his original St. Patrick's Day toast, which was inspired by his Co Galway native grandmother Margaret Mulkerins Coakley.

Ponton was one of the first winners in the Guinness Great Reunion Toast contest, which was advertised here on IrishCentral in partnership with Guinness.

Thomas took on the test and won $50K in the Great Reunion Toast contest! Watch what it feels like to be a winner with Guinness. #GuinnessStPats #ToastWithGuinness pic.twitter.com/JMnaF1GMoQ

Ponton, 54, tells IrishCentral that upon receiving his prize back in March, one of the presenters told him: "It was like you were born to win this contest."

Now, the proud Irish American is keen to share the story of his beloved Galway grandmother who was the inspiration behind his award-winning toast.

Below are Tom Ponton's words about his Irish granny and how she inspired his award-winning toast. Cheers, Tom!

I wanted to share with you all a bit about my grandmother, whom we called Gommy, as her birthday (July 10) is approaching, as well as the anniversary of the date she arrived in America (July 12, 1920).

My grandmother was from Moycullen, Co Galway. She was the youngest of 12 and came to America at age 22, following the path of a few of her older sisters. She settled in Washington, DC, and soon met a "handsome" (her words) man from Skibbereen, Co Cork, by the name of Connie Coakley.

Together they raised a family of three but sadly, Connie died unexpectedly in 1947. My grandmother needed to do something to get over her grief. She began taking in Irish immigrants into her home, a practice she continued even into the 1960s, when I had come along, as by then she lived next door to us in a city in Maryland (Hyattsville) just outside of Washington, DC.

My grandmother was a very social person and, quite often, a casual Sunday afternoon tea with her sisters and Irish neighbors would morph into a full-grown party with the tea replaced in the evening by whiskey and beer.

In the earliest stages of my memory, I can recall the group of them in a circle in which each would sing their chosen song. Danny McAuliffe would grace us with "The Road By The River that Flows Through Raheen" and Mike Quine would sing "Old Ballymoe." John Barry was known for "Patsy Fagan" and my grandmother's trademark song was "My Own Dear Galway Bay."

Watching all of this as a young boy was fascinating. I had no idea at the time of what a treasure I was witnessing. (Does anyone do this anymore? Have TV, cell phones, and video games taken it all away?)

So it was in this environment that I was raised. My parents loved The Clancy Brothers and Tommy Makem and almost every night, a different album would be played on the old scratchy record player that sat outside of our kitchen. It's funny how I learned these songs by osmosis without even concentrating on what was being played as we ate dinner each night.

As for my grandmother, I distinctly remember talking with her on her birthday one year when I was older. She told me she had lived a great life and had no fear of death whatsoever. I recalled her sentiments one snowy February morning in 1982 when I found her slumped over on her couch, her time having passed. I wrote about this moment once in a tribute:

"Margaret passed away in winter

Tea cup by her side

A simple end to a simple life

In gentle peace she died

She owned no banks or fancy cars

No office did she hold

As I myself grow old"

Shortly after my grandmother died, I was given her cherished Claddagh ring. The ring was given to her by her mother on a visit back to Ireland. It was the last time the two saw each other. It was her mother's wedding ring dating back to 1874. It is a permanent fixture on my hand.

So my grandmother was the person responsible for much of my love of Irish music and culture and the reason why I write lyrics and toasts and what have you.

My winning entry actually borrows a bit from Yeats ("When You Are Old") and Tommy Makem ("Rambles of Spring"):

"So when we return again

May our foes and have turned to friends

And may peace and joy

Be with you until then"

The toast was part of a song I wrote that makes fun of the blarney that you often hear during eulogies at funerals. (For the record, I am fine with colorful exaggerations). But I wanted the ending to have a less than cynical tone. For my winning toast, I had to adjust the final two lines as the contest was looking for some mention of St. Patrick's Day. Here it is:

"When you're old and gray and doze by the fire

And you have one last glass before your retire

It's not about wealth but the seeds you have sown

To the people you've loved and the friends you have known.

So let's raise a glass to our family and friends

And to those who oppose us let's make amends

For there's no use in cryin', It's not a long stay

And to my late grandmother, I say, Sláinte!