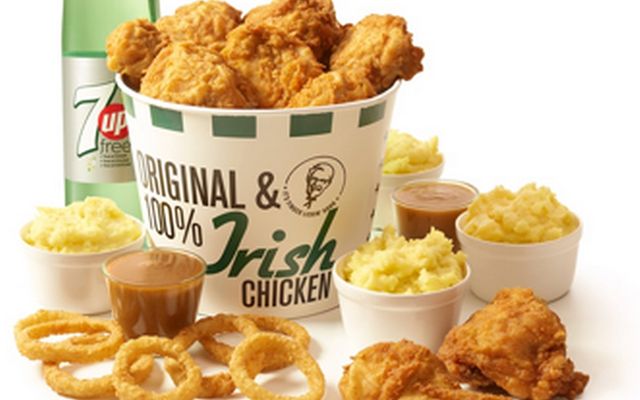 The O'Sanders Feast wins its seal of approval this St. Patrick's Day. KFC

After the embarrassment of the McDonald’s Shamrock Shake ad that featured on Twitter last week, KFC Ireland is just showing off with their hilariously funny video for the “O’Sanders Feast,” ripping apart the trend of certain US food chains and brands in coming up with lame attempts to market their products around St. Patrick’s Day.

Whereas McDonald’s couldn’t figure out that Stonehenge is in England and not in Ireland, KFC’s O’Sanders’ Feast expert Randy O’Brien returns for the second year to poke fun at others’ failures. O'Brien shows how KFC is using a green screen which allows him to pretend he’s trotting through the hills on a horse, and using the very Irish word “grand” before promising to up the Irishness levels 200%.

Next we are taken through many fantastically funny ways KFC could attempt to Irish things up more: Pints of chicken, taking on some Irish-language spelling patterns in their names, having an “Extended Family” Bucket as well as a fantastic rip at the way most people outside of Ireland have no idea how to pronounce our traditional names.

The Aran Jumper even gets its own special mention and we must say, if every Aran sweater came with a bucket of fried chicken, you might see more Irish people actually wearing them.

They even take a hit at our weather! With Storm Sinéad having everyone in the country battening down the hatches, KFC has you covered with some water-resistant chicken.

The ad reaches its pinnacle by warning that they only offer “100% Irish chicken, 0% fe*kin’ nonsense.”

Read more: Irish names that are most mispronounced in America

As for the O’Sanders Feast itself, it is released exclusively in Ireland featuring 14 pieces of 100% Irish chicken, four servings of new mashed potato, eight onion rings, two sides and a 1.5-liter drink for €25. Get your hands on it before it disappears faster than the end of a rainbow on April 23.

"We’re proud to be supporting Irish farmers and have 100% Irish Chicken here to stay on our menu. Just to reiterate, the green buckets were Randy’s idea…he insisted.”