Maggie Ives, an elderly English woman, says she "swears by" drinking Guinness and raw eggs, which she calls a "medical miracle." 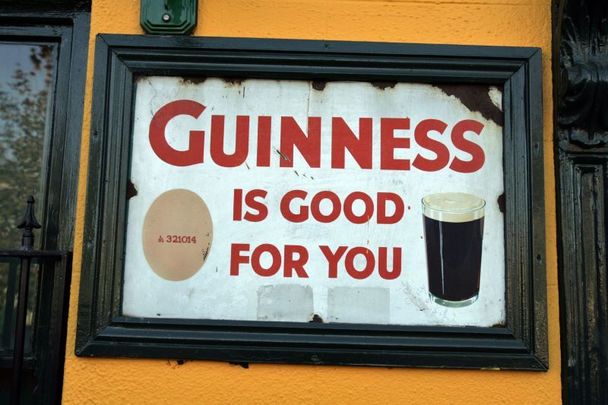 A "Guinness is good for you" outside an off-licence in Co Kildare in 2004. RollingNews.ie

Maggie Ives, who claims that drinking a Guinness and a raw egg daily helped her to recover after a fall earlier this year, is proof that Guinness really is good for you.

“I’m a great believer in raw eggs and Guinness," Maggie Ives, 78, recently told Worcester News. "I swear by it.”

I was near death: My miracle cure was Guinness with raw eggs https://t.co/8Ll791lfWa pic.twitter.com/v928U6lVLZ

In February, Ives fell and broke her pelvis while she was a resident at a sheltered living facility in Worcester, England.

“I can’t even tell you what hospital I was in,” Ives told South West News Service. “All I can tell you is I was in there 22 weeks. I kept coming and going, slipping in and out of consciousness.”

With chronic kidney and cardiovascular disease, as well as Parkinson’s disease, Ives was moved to Henwick Grange — an assisted living home — and given palliative care.

"I had 133 different antibiotics by drip," Ives said. "I didn't even know where I was.

"I don't remember the ambulance man coming and taking me away or anything.

"I can't even tell you what hospital I was in. All I can tell you is I was in there 22 weeks. I kept coming and going, slipping in and out of consciousness.

"I was hallucinating. I was at end of life. My brother and sister were called in so they could register my death and go to the undertaker."

Miraculously, Ives pulled through. She says she asked the staff if she could try an "old recipe" from when she "used to feel rough years ago" - Guinness and raw eggs.

“You don’t even taste the eggs at all,” Ives said. “You just swallow them down. I’ve been doing that quite a long time.”

Ives, a former nurse, calls her concoction a "medical miracle," and now says she feels like she's "come back from the dead."

She also credits the top-notch care she received at Henwick Grange: "I can't fault the staff here, from the laundry lady to the cleaners and from the carers to the management. Whatever food I want, I order. If I want scampi every day, I have scampi every day.

"They're all very kind. I'm even walking again now. I haven't walked for two years. I'm staying here until they kick me out. This is my home. They are angels to me. I feel as happy and as strong as I have felt in years."

Did you know the Irish have 90 words to describe potatoes?