Robert Pope ran 134 miles across Ireland after beginning his Irish journey with a pint of Guinness in Galway and listening to U2 along the way to Dublin. 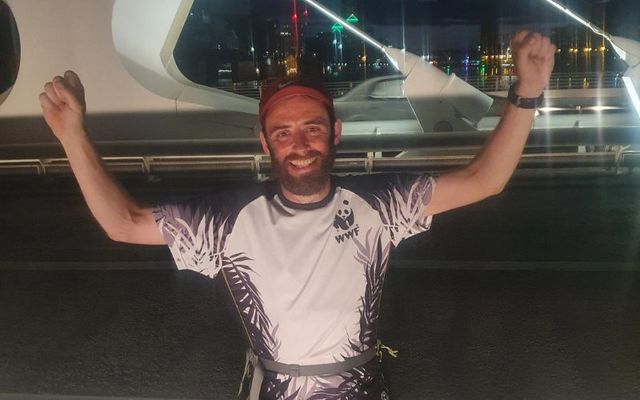 Robert Pope, a British marathon runner, has become what is believed to be the first person to run the width of Ireland in less than 24 hours.

At 2210ish? I touched the Samuel Becket Bridge becoming maybe(?) the first person to run across Ireland in 24h. Apologies if I'm claiming false glory, but I'm just busy thanking all those who made it possible. Thanks to you lot too. Will get to all your messages soon#EdgeToEdge pic.twitter.com/wGZgiwTMGM

The Liverpool man prepared for his run with a pint of Guinness in a Galway pub. After all, Guinness gives you strength!

The Liverpool runner had another big Irish influence on his endeavor - U2, of course.

"I'm hoping to run across #Ireland on Sunday... Galway to Dublin, in time for the Edge's birthday, because...well, why not?," he said in a tweet on August 4; he used the hashtag #EdgeToEdge on social media throughout the journey.

Pope used his run to raise more than £2,100 for the for the World Wildlife Foundation as well.

A good few have asked if I'm running for charity. Wasn't my plan, but it seems mad not to. Not going to pester anyone, but as I didn't hit my last goal for @wwf_uk, we'll pick that back up. Feel free to donate, if you're keen. Maybe see how I do first? 😃https://t.co/3aPiIOHUyA

Pope set off from Galway's Spanish Arch at 10:30 pm on Saturday, August 6, and told the BBC that fatigue set in much quicker than he anticipated.

"The wheels nearly came off very early, because we'd gone about 24 miles, maybe four hours into it, and I'd been nauseous for the last two. I just said to the guys, 'I don't think this is me over-reacting, but I think I'm going to have to quit."

Quick update. Not a great one.
Legs are flying. Guts are dying. Seeing what happens in next hour. Most unexpected. This early anyway. Most unwelcome. 🤮🤢

However, he got back on track with a well-timed can of Coke and some painkillers along with the support of his team.

Pope mainly followed a route of traditional backroads in addition to some canal pathways in order to avoid busy motorway traffic. Speaking with BBC, he paid tribute to the strangers who came out to support him on his jaunt.

"One fella, he'd driven down about 45 minutes having heard about it and he brought us down a bunch of bananas. And my body just went 'yes, you want one of them, have one of them," Pope said.

When he ran through Cloghan, Co Offaly, staff from a local shop turned up to cheer him on and provide him with some cereal bars for the journey, while a "guardian angel" named Tony appeared when he was about 10 miles from Dublin to guide him toward the finish line.

"I had about 10 miles to go. I'm in a hole at this point and Tony comes along and asks, 'Do you mind if I run with you' and I was just like 'yeah, but I really need to concentrate now'.

"So, we just worked together, and it got to the point where I was following him... he would warn oncoming traffic.

"We came off the Royal Canal heading down into Dublin as the sun was going down."

At 2210ish? I touched the Samuel Becket Bridge becoming maybe(?) the first person to run across Ireland in 24h. Apologies if I'm claiming false glory, but I'm just busy thanking all those who made it possible. Thanks to you lot too. Will get to all your messages soon#EdgeToEdge pic.twitter.com/wGZgiwTMGM

Pope was in high spirits following the run and joked that he still had enough energy to struggle up the stairs in his accommodation.

The Liverpool native is no stranger to long-distance running. In 2018, he ran more than 15,000 miles across the United States as a tribute to the 1994 film "Forrest Gump".

He is confident that he has become the first person to run from coast to coast in Ireland due to the fact that there is no official record of any completing the achievement.

WATCH: Irish man finally meets US penpal in Ireland - and they fall in love!