U2 is reportedly set to rock out on the Las Vegas strip next year to open the new MSG Sphere where they'll play a "must-show residency." 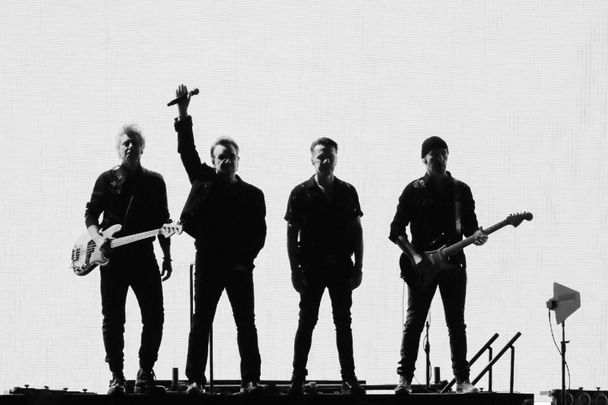 December 4, 2019: (L-R) Adam Clayton, Bono, Larry Mullen Jr., and The Edge of U2 perform during their The Joshua Tree Tour 2019 at Saitama Super Arena in Saitama, Japan. Getty Images

U2 is set to be the first group to perform at the MSG Sphere in Las Vegas when it opens in 2023, according to a report in Billboard.

The Irish rockers will reportedly follow up their opening performance at MSG Sphere with a “multi-show residency” that “will be spread out over several months and be performed on non-consecutive days,” Billboard says.

U2, consisting of  Bono, the Edge, Adam Clayton, and Larry Mullen Jr., hasn't played a concert since December 2019 when it concluded its The Joshua Tree Tour 2019 in Mumbai, India.

The four-year tour began with the i+e Tour of European and North American arenas in 2015. In 2017, to mark the 30th anniversary of The Joshua Tree, the band headed to stadiums in North and South America, as well as Europe.

In 2018, following the release of "Songs of Experience," it was back to North America and Europe. The following year, The Joshua Tree Tour picked up again, this time in New Zealand and Australia, in Japan, Singapore, South Korea, The Philippines, and India.

"As a live band," guitarist Edge said, "we're always looking for a magic that occurs when we play with our audience present. That's why people come back to our shows again and again."

U2, who has won 22 Grammy Awards, is one of the highest-grossing touring bands of all time.

The MSG Sphere in Las Vegas, near the Venetian Hotel, is set to be opened in the latter half of 2023, Madison Square Entertainment said in May when construction marked the topping of the structural work of the venue.

Standing at 366 feet tall, the completed exosphere of The Sphere is the largest spherical structure on Earth.

Upon completion, the new venue is set to have approximately 17,500 seats – including 10,000 immersive seats – and a scalable capacity of up to around 20,000 guests. The new venue is expected to host a wide variety of content, including attractions, concerts, residencies, product launches, and sporting events.

In addition to the world’s highest resolution LED screen, MSG Entertainment has developed a multi-layered audio system equipped with more than 160,000 speakers that utilize beamforming technology to deliver targeted, crystal-clear and consistent audio to every seat in the house. The venue will also feature multi-sensory technologies such as immersive seating, evocative scents, and changing temperatures, to take experiential storytelling to an entirely new level.