U2's Bono and The Edge played to about 100 people at the Khreshchatyk metro station in Kyiv, Ukraine on Sunday as "a show of solidarity with the Ukrainian people." 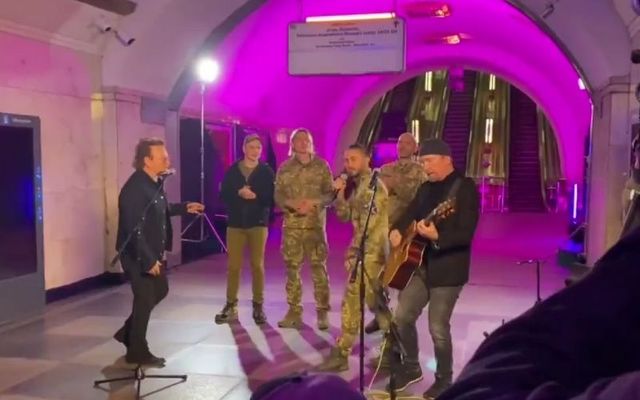 Bono and The Edge during their performance on Sunday. Good Morning, Ukraine Twitter

Bono and The Edge performed a 40-minute "freedom" concern in a Kyiv metro station on Sunday, praising Ukrainians for their resistance to the ongoing Russian invasion.

A crowd of about 100 people gathered inside the Khreshchatyk metro station on Sunday to listen to the short concert in honor of Ukrainian freedom.

Bono paid tribute to Ukrainian President Volodymyr Zelenskyy, stating that he is leading the world in the "cause of freedom right now".

"The people of Ukraine are not just fighting for your own freedom, you're fighting for all of us who love freedom," Bono told the crowd on Sunday.

The U2 frontman also referenced "Pride (In the Name of Love), one of U2's most famous songs, in his address to the crowd.

"This evening, 8th of May, shots will ring out in the Ukraine sky, but you'll be free at last. They can take your lives, but they can never take your pride," Bono said in between songs.

Zelenskyy thanked Bono for the performance in his nightly address to the Ukrainian people on Sunday night, praising the U2 frontman for "drawing even more attention to the need to help our people".

"President @ZelenskyyUa invited us to perform in Kyiv as a show of solidarity with the Ukrainian people and so that's what we've come to do. - Bono and The Edge #StandWithUkraine."

President @ZelenskyyUa invited us to perform in Kyiv as a show of solidarity with the Ukrainian people and so that’s what we’ve come to do. -- Bono and The Edge #StandWithUkraine

Russia launched a full-scale invasion of Ukraine on February 24 and pressed toward Kyiv before withdrawing its forces from near the capital at the end of March and concentrating its focus on eastern Ukraine.