Bono was in Washington, DC to receive the William Fulbright Prize for International Understanding and paid tribute to Capitol Hill officers for their courage during the January 6 riots. 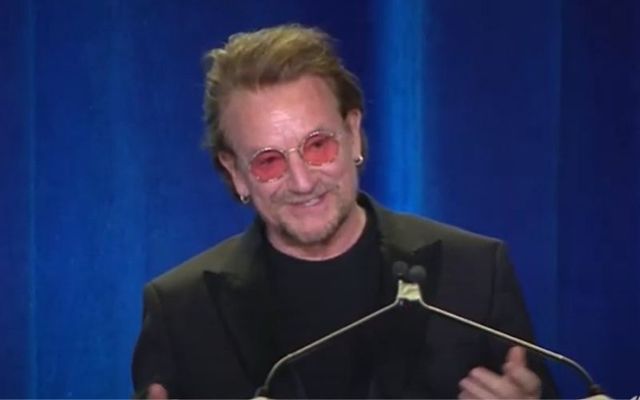 Bono paid a visit to Capitol Hill and praised the police officers for their courage during the January 6 riots while in Washington DC to accept the William Fulbright Prize.

U2 singer and Irish man Bono was in Washington DC this week to receive the William Fulbright Prize for International Understanding. The award was presented to mark his commitment to fighting injustice, extreme poverty, and the global Aids crisis.

In his acceptance speech at the ceremony on Thursday, Bono spoke of the “humbling heroism” of people in Ukraine who were “actually living for the ideal that is freedom”.

He said that most people of his age grew up thinking the world was becoming more and more free, especially after the Berlin wall came down.

“It was a death of a generation’s innocence,” he said.

Speaking about growing up in Ireland in the 1970s, Bono said: “We looked to America. We saw a country with its own long-running arguments, its own injustices. We knew this promised land wasn’t always keeping to that promise. We knew America wasn’t living up to all its ideals, but the fact is America had ideals.

Later, Bono spoke with a group of security officers from Capitol Hill and thanked them for their service during the January 6 riots.

"You guys saved America, as far as I am concerned, from so much awfulness on that day and I just want to say people around the world really respect you," he said.

Never know who you will run into on Capitol Hill.

Bono is to donate the $50,000 prize to two organizations he co-founded; One, a global body that campaigns to end extreme poverty and preventable disease by 2030, and Red, which works with well-known corporate brands to try to eliminate HIV/Aids in Africa.