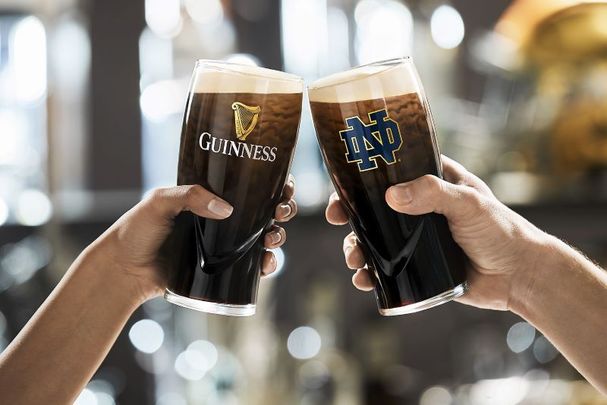 Guinness, "the brewing Irish," is teaming up with The University of Notre Dame's Fighting Irish for a new seven-year partnership.

Guinness is proud to announce that is now a partner and official beer of Notre Dame Fighting Irish Alumni and Fans, a group that numbers well over 40 million across the U.S.

Its seven-year partnership plans to unite two Irish institutions and bring to life new traditions, like raising a Guinness toast to honor the Irish faithful – whether you’re Irish by blood or in spirit.

Guinness says: "While these are no doubt unprecedented times, we’re also reminded that football is more than just a  game. It’s about building bonds between us – especially in the hardest of times. It’s about believing a  comeback is always possible and, just like the best pint in the world, great things come to those who wait. Because no matter what… We will play again. "

We proudly raise our pints in partnership with the Fighting Irish of Notre Dame. Though this season will be different, we still can't wait to build new traditions together. Here’s to the Irish faithful across America and Guinness, Official Beer of @FightingIrish Alumni and Fans! pic.twitter.com/XGcO9ROifQ

Guinness says it's honored that former Fighting Irish quarterback Joe Montana will be the National Ambassador for its new partnership.

"As an icon who has won both collegiate and professional championships, Joe is the epitome of a great leader known for staying cool under fire," Guinness says.

Fans 21-and-over can expect to see Montana featured in Guinness TV spots, social media, and other promotional activities,  including a focus on encouraging responsible drinking.

Montana helped launch the new partnership by raising a Guinness in a toast to traditions old and new, and to the promise that "we will play again."

Montana says: “As a former player and an alum, Notre Dame has always had a special place in my heart, and on a trip with my family to Ireland, I fell in love with Guinness. A perfect pint is lighter and more delicious than I  ever imagined.

“I also love that Guinness and Notre Dame have shared values – a respect for tradition, but also a relentless desire to win and a commitment to building an even better future."

Nikhil Shah, Guinness brand director, said: “This is a dream come true, even as we go through these challenging times.

“It’s not often that you come across a group that so closely aligns with your purpose, but that’s exactly what we’ve found in the fans and alumni of Notre Dame. And as we kick off our partnership, we’re also lucky to have a living legend like Joe Montana – the Comeback Kid – on our side.

"What’s more,  the network of Fighting Irish supporters extends well beyond South Bend – from New York to Chicago to Baltimore to Dublin and around the world – and this year and beyond, it’s going to be a privilege to experience their passion for the university and to build new traditions together. Cheers to this partnership nearly 200 years in the making.”

Guinness and Notre Dame are pleased to give fans of legal drinking age a new way to relive their favorite football memories and start new Saturday traditions with special edition Notre Dame 8-packs of Guinness Draught cans, which can be found across select U.S. markets, including Indiana, New York, Chicago, and Boston. Guinness and Notre Dame are also working together to establish a shared culture that prioritizes responsible drinking above all else.

Keep up with all things Guinness and Notre Dame by following @GuinnessUS on Instagram, Twitter, and Facebook. And remember, wherever you’re safely raising a pint to the Fighting Irish, always drink responsibly.