Today we celebrate his life and achievements! To Arthur! 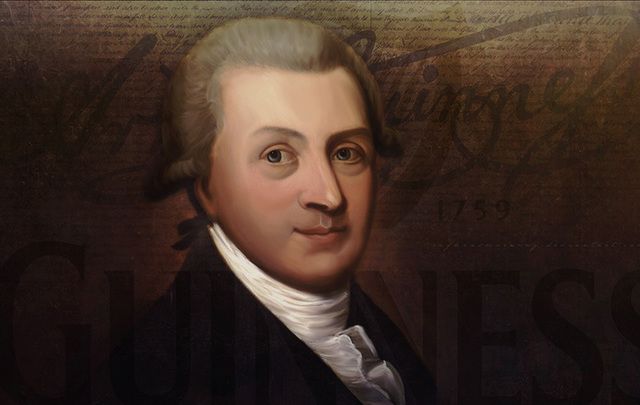 Arthur Guinness, the man who invented Guinness and put Dublin's St. James' Gate Brewery on the map, was born on this day, September 24, 1725. Today we raise a glad to Arthur. Sláinte!

On September 24, 1725, Ireland welcomed into the world a man who would go on to create one of the country's most prolific exports and one of its most iconic symbols. Yes, 295 years ago, the man behind the perfect pint, Sir Arthur Guinness, was born.

Born into the aristocratic Guinness family, Arthur’s exact place of birth is unknown but is believed to have been in County Kildare, either in his mother's home at the Read homestead at Ardclough, County Kildare, or near Celbridge where his parents lived around the time of his birth. His exact year of birth is also unknown but the Guinness estate estimated it to be September 28, 1725.

Posted by IrishCentral.com on Thursday, September 28, 2017

Fortunate Guinness came into £100 when he was in his 30s on the death of the Archbishop of Cashel, Dr. Arthur Price, for whom his father acted as a land steward. It is also rumored that Guinness’s father was partial to brewing beer and did so for the other workers on Price’s estate. In 1752, Guinness received the inheritance money, establishing a lease on his first brewery in Leixlip three years later. He had immediate success and in 1756 he bought a long lease of an adjacent site as an investment property.

As his success continued, Guinness set his sights on the country's capital Dublin, coming across a dilapidated brewery he felt he could develop in the southwest area of the city center known as St. James's Gate Brewery. It was here that history was made.

We can never know if Arthur Guinness was confident enough in his brewing skills to predict his own incredible success but nonetheless, he signed a 9,000-year lease on the brewery for £45 a year. It is around this very spot that the Guinness world still revolves almost 300 years later. Although Guinness also now brews in different places, St. James Gate will always be home to the black stuff, or at least until 10,759 AD, when the lease eventually comes to a close.

Although Guinness had concentrated on brewing both ales and porter for most of his life, it was in the late 18th century that he gave up on ale and concentrated on creating the perfect porter. Pouring all his energy into his new brew, the result was his now-legendary Guinness Stout, first produced in 1799, and its fame quickly spread throughout England and Ireland.

In the hundreds of years that followed, his stout has traveled all over the world, being brewed in 49 different countries and requiring millions of liters of water every day to keep it going. Such is its success in the US, it's estimated that one pint is poured every seven seconds. That’s an awful lot of Guinness!

Not only was Arthur Guinness a great businessman, and a great beer brewer, but he also had a notion that he was going to do his bit to help save Irish society. He was a firm believer that liquor, especially gin, was destroying the lower classes in Ireland in the 1750s and he believed that everybody, no matter how much they were worth, should have access to a high-quality beer and a healthier form of alcohol. As such, he greatly supported the reduction of tax on beer, leading him to support Irish politician Henry Grattan, who campaigned for legislative freedom for the Irish Parliament in the late 18th century throughout the 1780s and 90s.

Many of us may not agree with the rest of his politics, however. According to The Economist, Guinness was accused of being a British spy in the lead up to the 1798 Wolfetone Rebellion and was a staunch opponent to Irish nationalism. His descendants continued the tradition and even donated £10,000 (worth about $1.4 million today) to the Ulster Volunteer Force, the paramilitary force established in opposition to the Irish Volunteers in the early 20th century.

Living on through the Arthur Guinness Fund today, Arthur is rumored to have been an all-around good guy, often donating to charities, working to ensure better healthcare for the poor, and even publically supporting Catholic emancipation in 1793, despite coming from an upper-class Protestant family.

Such was his dedication to ensuring a good standard of living for all, even cats have appeared on the books for their work in the Guinness breweries, awarded an extra treat out of the profits for keeping away mice. Well after Guinness’s death in 1803, his employees received benefits such as health insurance, subsidized meals, pensions, higher wages, and more, that were unparalleled in the country throughout the 19th and 20th century.

It seems there was nothing Guinness turned his hand to that he didn’t excel at, as he and his wife, Olivia Whitmore, who he married in St. Mary's Church, Dublin in 1761, had an extremely fruitful marriage. In all, poor Whitmore gave birth to 21 children, ten of whom survived into adulthood.

Despite his growing fame, and willingness to play an important role in his society, Guinness would not have been one to post too many selfies on social media if he was alive and well today. Maybe he was just too busy brewing so much beer or having so many kids, but the brewer was famously photo-shy--portrait shy as it was then--and only one known portrait of the master brewer exists today.

Just four years after finalizing his piece de resistance, Guinness died in 1803, aged 78, leaving his business to be continued by three sons: Arthur II, Benjamin, and William. By this stage, it is estimated that the company was already producing approximately 809,000 gallons of beer a year, with sales growing by 10 percent a year under the management of Edward Guinness.

Do you drink Guinness? Where did you have your most memorable pint? Let us know in the comments section below.