WATCH: The Gerry Adams ‘Negotiators Cookbook’ launch video is something to behold 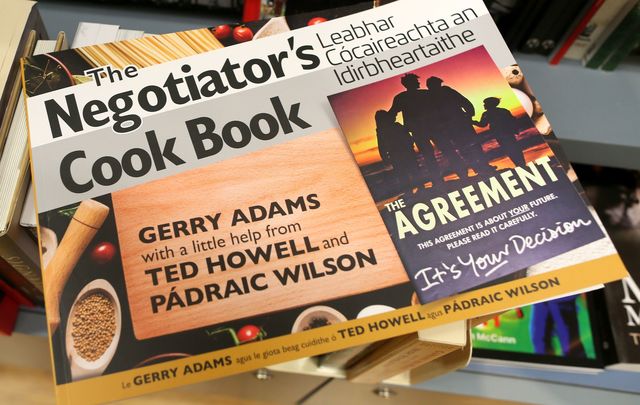 In a new promotional video for the cookbook, Adams says that the cooking that fed key players is “one of the best-kept secrets of the Irish peace process.”

Being promoted as a ‘must-have’ for Christmas, the cookbook features recipes and tips from Gerry Adams himself, along with Ted Howell and Pádraic Wilson.

“The British never fed us," Adams, now a Louth TD, said when he first announced the cookbook idea. "They never had any food. But as intrepid republicans and being blessed by one or two great cooks these are the recipes that sustained the Irish negotiating team."

In the newly-released promotional video, Adams says “When you bring together a group of hungry Republicans, they have to be fed.”

“So who fed them?” he asks. “We fed ourselves,” he says, in perhaps a riff on the name Sinn Fein, which translates to ‘we ourselves.’

Adams goes on to say that Martin McGuinness - “God rest him” - put on weight during the peace processes thanks to the cooking that was being done behind the scenes.

Read More: Gerry Adams on what must never be forgotten about Easter 1916 Rising

“It’s a must for every kitchen cabinet,” says Adams.

Proceeds from the sale of the new cookbook will go directly to Sinn Fein. It is now available for purchase online.

You can watch the promotional video for The Negotiators' Cookbook here:

In a new promotional video for his cookbook, Gerry Adams says that the cooking that fed key players is “one of the best-kept secrets of the Irish peace process.” Full story here: http://bit.ly/2RqOTzm

Posted by IrishCentral.com on Tuesday, October 30, 2018

Will you be purchasing The Negotiator’s Cookbook? Let us know in the comments