These are the best Irish pubs in Boston

Shipping up to Boston? These Irish pubs in Boston are among the top-rated on Yelp. 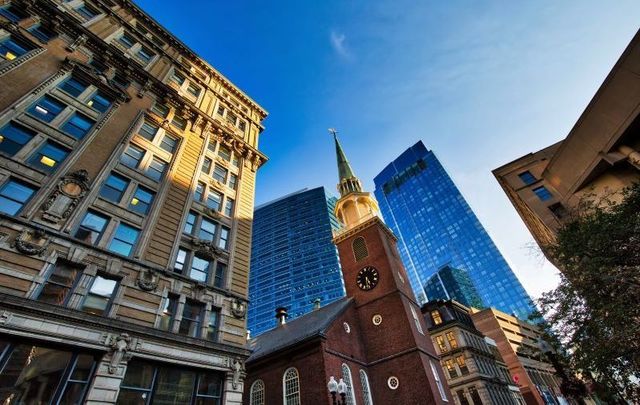 Shipping up to Boston? Be sure to check out these Irish pubs! Getty Images

Shipping up to Boston? Be sure to check out these Irish pubs that are among the top rated on Yelp

Boston is Massachusetts’ largest city and home to many wonderful sites. Whether you want to take in some culture by touring around Harvard University or fancy catching a few home runs at Fenway Park then Boston has you covered.

Read More: 32 Irish pubs chosen by Michelin as the best spots to dine out

Above all else, Boston has some of the best Irish pubs in all of America. Sure they may not have happy hour or stay open till 4 am but what they do have is plenty of craic and traditional Irish flair. It is also a place where many Irish people call home. There is a deep heritage of Irish culture here which you can find out more about by visiting the Irish Culture Centre.

Keeping that in mind here is a rundown of the top 10 Irish pubs in Boston according to Yelp, with some reviews from some very pleased patrons.

The Druid Irish Pub in Boston

A regular haunt for many locals and passers-by, The Druid has been livening up the city of Cambridge for over a decade. Famed for their fish and chips, you are guaranteed to leave with a full stomach and a perfect pint, or two, of the black stuff (Guinness).

This award-winning pub is housed in the oldest wooden mercantile building in Cambridge which allows for an exceptional interior décor that you would expect from an Irish Pub. Traditional Irish music sessions are a welcome addition every Tuesday and Saturday nights so you’re sure to have a terrific night.

“Definitely recommend the fish and chips or the beef stew. Meats were tender and flavorful. Best Irish food I've had in the US so far.”

“Music in the corner is real Irish trad. Having grown up in Ireland I can tell you this is some of the best you'll hear anywhere”.

Named after the famed Irish playwright, this Irish pub has a more somber tone than that of a traditional Irish pub. It's down to earth look adds to its mystique and allows for the perfect setting for the various poetry and book readings which are held weekly. But don’t be fooled into thinking this is a boring bar because when the live music starts you would swear you were back in Ireland.

The interior is decorated with the works of Brendan Behan in honor of the man who became an Irish literary icon and there isn’t one TV in sight. It has been voted the ‘Best Irish Bar in Boston’ four times by Boston Magazine since being established in 1988. It is a cash only, no-frills bar with a fantastic list of beers and craft beers but you won’t find any of the regular Irish food as it is ‘bring your own food’ night, every night.

“Good beer, great atmosphere, and the weekly live Irish music makes this place one of the best Irish pubs in Boston.”

Read More: These Irish pubs are nowhere near Ireland

Located in the heart of Boston’s downtown this Irish pub is regular for all, from big businessmen to global travelers, it has something for everyone. Since opening its doors in 1991, ‘Dooleys’, as it is known by the locals, has offered musicians a home to pop in and get a session going.

This Irish pub guarantees an experience to remember by offering its clients entertainment all week long. The food is your typical Irish cuisine that keeps you coming back for more and even has Kerrygold butter. They pride themselves on being a place to meet for ‘a pint and a chat’, sure what else do you need?

“There was an Irish bloke that was completely pissed, danced with just about everyone in the place, took shot after shot of whiskey, and had an infectious smile on his face as the folk band played traditional Irish tunes in the corner. It was exactly what I was looking for.”

“Irish bars are a dime a dozen in Boston, but this place is a cut above the rest, especially when there is live music.”

Honored with being one of the oldest family run Irish pubs in Boston, J.J. Foley’s Café has been serving patrons for over 100 years. While offering affordable food and drinks in the best and worst times during America's history it has really stood the test of time.

This long-standing Irish pub offers an extensive menu. It includes all the favorites you want as well as the classic dishes you need, while also offering some quite unique fare. They may not offer an over exaggerated beer list but they do offer beer and cider in cans, you would feel like you were back in college.

“This place is PERFECTION!!! Everything is perfect. The lighting, the atmosphere, the FOOD, the crowd, the trivia night. It's AWESOME!!”

This busy Irish bar is a bit north of the center of Boston but well worth the trip. Entertainment is guaranteed each night which is sure to make your trip a pleasant one.

Since opening their doors in 2004 their sole purpose has been to offer visitors “eclectic beer, innovative food, and visual experience they were not experiencing elsewhere.” Each beer has its very own glass, which is quite the feat with the extensive beer list they carry. You might say this is your typical hipster Irish pub.

“Once upon a time, there was a philosopher who said, "the only constant in life is change". I forget who it was, because you know, the ol' grey matter ain't what she used to be. But whoever it was deserves a beer for that gem of life wisdom. And not just any ol' beer in a can, but one from the glossy mahogany bar at Olde Magoun's Saloon in Magoun Square.”

“Love the vibe of this pub and the crazy beer list. They have every type of beer you could possibly imagine and a great food menu.”

The Squealing Pig pub in Boston

As Irish pubs go, the Squealing Pig is quite unique. It is a very modern take on an Irish pub and offers far more than just your traditional Irish cuisine. These guys like to push the boat out when it comes to their food and Boston likes it.

As well as being able to get the usual fish and chips, you can grab something like a ‘prosciutto, fig jam and gorgonzola’ sandwich. You wouldn’t find something like that in the back end of nowhere in Ireland that’s for sure, but it definitely sounds like something to try.

“This was my favorite part of Boston. We went back twice for the great, friendly service and reasonably priced drinks.”

“The Mars Bar Toastie is definitely an "om nom nom" and they serve a fairly good selection of menu items until midnight. The bartenders are super friendly and after only a few visits will start to treat you like a "regular." I love the Pig!”

If you are looking for a place to watch the sport you love from back in Ireland, then this might be the pub for you. The Banshee is one of greater Boston’s premier pubs for broadcasting both North American and European sporting events. If there is something you want to watch they can more than likely accommodate.

This neighborhood favorite is even featured on worldsoccerbars.com. Unlike other Irish Pubs, The Banshee has a unique addition to their menu by offering customers the option of building their own stir fry, so get the juices flowing.

“The Banshee is a hidden gem. This is an authentic Irish pub and has a truly authentic pub atmosphere- it's a nice, clean place where you can go to get good food, a quality drink and socialize with people from all walks of life.”

“Awesome Irish bar with a stupid fun atmosphere. Best part is that the second level is a Packer bar which I can appreciate coming from WI. Such a fun spot to watch a game and network with other fans.”

A local favorite, L Street Tavern is tucked away off the beaten track in South Boston or “Southie” if you watch any movie based in Boston. Untouched by the rustle and bustle of constant tourists this Irish pub is a local hidden gem.

This is an Irish pub where you know what you’ll get with good fun, good food and good times. As well as all that goodness, L Street Tavern is also famed with being a pub featured in the Oscar-winning movie Good Will Hunting, so “how do you like them apples.”

“Atmosphere= A+ (the jukebox was a big hit). Service= A+ the bartender was quite friendly and had the fireball flowing. Value was it was very good. I am glad to give this place a 5-star rating. Thanks L Street I'll be back!”

“Good spot. The bartender was great, the other customers were friendly, prices were reasonable, and it had a very Boston feel to it. We went because it was the spot where Good Will Hunting was filmed.”

Since being established all the way back in 1882, Doyles Café has been thriving for over 130 years and has no signs of slowing down anytime soon. In all those years this Irish pub has stayed true to its roots by keeping its Irish culture and charm well and truly alive.

A regular haunt for locals and tourists this pub caters to everyone with their authentic Irish classics, as well as some Boston favorites. This pub also has a unique relationship with the Sam Adams Brewery, as it is the last stop on the tour where you can enjoy some lunch. This partnership began with Doyles Café becoming the first pub in Boston to have Sam Adams beer on tap. It has also been featured in many big movies like Mystic River and 21.

“DOYLE'S! Everyone knows that Doyle's is Boston institution; it's been here forever and many make the pilgrimage here after they hit up the Sam Adam's Brewery Tour to enjoy some beer (and take home a free glass).”

“Hands down good food, good atmosphere, and yes it can be a tourist area from the Sam Adams Brewery but I came all the way from New York just for their clam chowder and lobster roll! I love their food! Com'on join the bandwagon- there is a reason why this placed survived more than 100 years-they have amazing everything.”

The Burren Irish Pub in Boston

This traditional Irish pub has been entertaining locals in Boston for the last 20 years. Established in 1996 by two traditional Irish musicians, this lively bar has more than just great food on offer, with live music and entertainment seven nights a week.

It is keeping traditional Irish music well and truly alive to the delight of all the Irish diaspora that call Boston home. With everything you would expect from a traditional Irish pub, the Burren has established itself as an institution for all its local dwellers.

“This is my favorite bar in Somerville. A Friday or Saturday night with live music in the back room is a guaranteed good time. It gets very crowded back there, but it's all part of the experience.”

“Ideal place for day drinking. Last time I was there, there was a man reading a book for several hours while the band played...which gives you a sense of how long I stayed there too. Solid beer selection.”

What's your favorite Irish pub in Boston? Let us know in the comments!