Who is Allie Sherlock? One of the youngest stars in the Irish music industry. 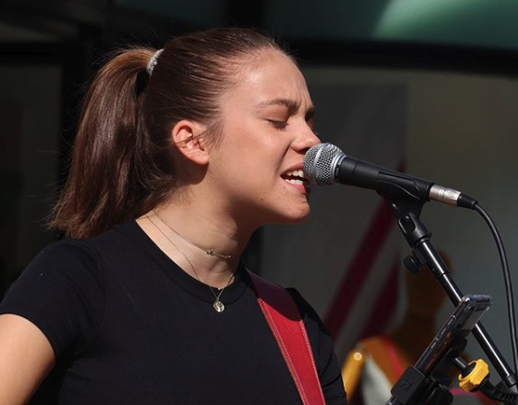 Teen musician Allie Sherlock,  a native of Co Cork, is on the rise to fame.

Born in Douglas, County Cork, Sherlock went viral in 2017 when a video of her busking on Dublin's Grafton Street went viral:

Just 12 years old at the time, Sherlock's performance of Ed Sheeran's "Supermarket Flowers" caught the attention of Ellen DeGeneres in the United States, and, in January 2018, she appeared on DeGeneres's famous talk show.

Sherlock stunned viewers with a mesmerizing performance of Adele's hit "A Million Years Ago" in a YouTube clip that has been viewed more than four million times:

Later in 2018, the young Irish singer continued her rise to fame by signing a five-year deal with Patriot Records, a company owned by One Republic's Ryan Tedders.

The 15-year-old Cork singer regularly posts covers and busking performances on her social media accounts and has amassed a huge social media following.

Sherlock's YouTube channel, for instance, boasts over 3.2 million subscribers, while she has more than 1.4 million followers on Instagram.

Sherlock can trace some of her social media following back to Canadian superstar Justin Bieber, who shared her cover of his song "Intentions" on his own Instagram story in February this year.

The pair enjoy a good relationship and Sherlock has called Bieber "an amazing person" in the past.

However, that relationship turned frosty earlier this year in the wake of the killing of George Floyd in Minneapolis when Bieber called Sherlock out for not using her social media influence in the fight against racism.

Bieber reacted angrily to one of Sherlock's Instagram posts which simply asked "what's one thing you can't do without?"

What's one thing you can't live without ? ?

Sherlock posed the question on June 7, just days after Blackout Tuesday, when people in the music industry showed solidarity with black people and black artists.

And Bieber took issue with Sherlock's post, commenting not once, but twice.

"It hurts me that you would ignore, or be silent regarding the racism that fills this globe. Fighting for black lives isn’t political, it’s FIGHTING FOR HUMANITY!" he said.

"I can't live with you having a platform and not using it. #blacklivesmatter," he said later.

Bieber has since deleted the comments.

Sherlock responded in a now-deleted comment saying that she had to delete her Blackout Tuesday post a week previously because she had suffered so much abuse.

That confrontation with Bieber aside, it has been another stellar year for the extremely talented Irish singer.

She released her debut EP, self-titled EP this year, and has followed that up with a second EP already, called "A Part of Me."

The Cork singer has additionally featured on a cover of The Cranberries hit "Dreams" alongside a number of prominent female Irish artists in support of domestic abuse victims and also made an appearance on the final episode of RTÉ's Home School Hub.

We can expect great things from the promising youngster.