The female singers and musicians, dubbed Irish Woman in Harmony, recorded a cover of "Dreams," a hit song in the 1990s for Irish group The Cranberries. 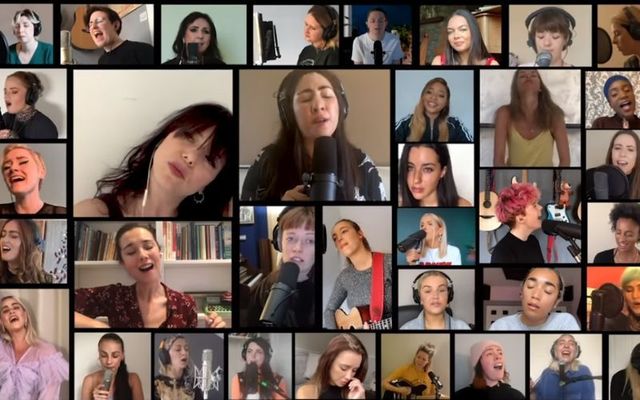 An all-star cast of 39 Irish female artists have teamed up to record a powerful charity single for Safe Ireland, a charity for victims of domestic abuse.

The female singers and musicians, dubbed Irish Woman in Harmony, recorded a cover of "Dreams," a hit song in the 1990s for Irish group The Cranberries.

The recording is the brainchild of Irish artist RuthAnne, who reached out to several female artists to gauge interest in recording a track in support of victims of domestic abuse.

The idea almost instantly snowballed into a huge, socially-distanced collaboration of some of Ireland's most prominent female artists.

Imelda May, Lisa Hannigan, Una Healy and Clannad's Moya Brennan all feature on the track, which additionally features several up and coming acts like Laoise, Soulé and Lilla Vargen.

All proceeds from the recording will go to Safe Ireland at a time when domestic abuse in Ireland is "worse than ever," according to the Dublin Rape Crisis Center.

RuthAnne said that the artists recorded the track to inspire young girls that they could make it in a male-dominated industry but said that the main goal of the single was to raise funds and awareness for domestic abuse in Ireland.

"We wanted to come together as the Irish Women in Harmony to raise awareness and funds for a charity close to all of our hearts, Safe Ireland, who support domestic abuse victims and survivors," she said.

She said that she chose to cover a Cranberries' song because Dolores O'Riordain, the band's frontwoman, was an inspiration to all Irish female artists and she said that the cover paid homage to O'Riordain.

Check out the video - and the full list of collaborating artists - below.