Matt Damon couldn't think of a better place to be during lockdown than Dalkey, South Dublin. 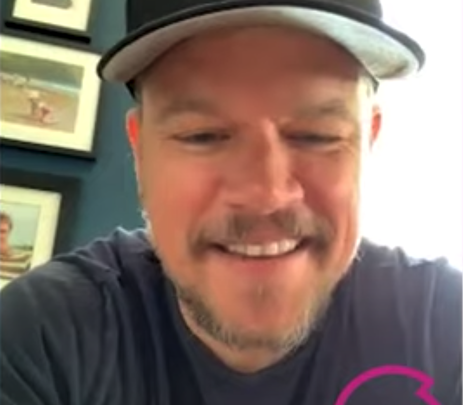 Matt Damon, who has been in lockdown in the village of Dalkey, South County Dublin, during the COVID-19 pandemic has finally emerged in an exclusive interview with a local Dublin radio station Spin 103.

Damon (49) was filming the movie, The Last Duel, in Ireland at the beginning of March when the COVID-19 lockdown shut Ireland down. He's now holed up with his wife and three of his children in a rented house in Dalkey. However, the Hollywood star said he couldn't think of a better place for his family to be quarantined than the seaside town of Dalkey, in Dublin.

He said: “This is one of the most beautiful places we’ve ever been.

"I’m with my whole family, I’ve got my kids, and we have teachers with us because we were planning on missing school for about eight weeks.

"So we’ve got what nobody else has, which is actual live human beings teaching our kids, the schools are all shut down back home and all the kids are doing remote learning.

"So we feel guilty, we’ve got this kind of incredible set up in this place, it’s just absolutely gorgeous.

"I can’t think of any place else you’d rather want to be in a two-kilometer radius of”.

Speaking from his new home, in Dalkey, Dublin, Damon told the radio station he "laughed so hard" when he found out that his new neighbors were protecting him. When the DJs from Spin had tried to find Damon, Dalkey locals refused to release any details about Damon's whereabouts.

He told Spin "I know, I heard this story, laughed so hard and that’s when I realized how great this place was, and how protective everybody here is.

"You joined the group for one day before they found you out and booted you out, which is great!”

Damon is loving Dublin! He said "It's incredible, one of the most beautiful places we've ever been."

During the interview Damon revealed that his daughter,  Alexia (21), who is at university in New York contracted the virus early on.

“Our oldest daughter is in college, obviously that’s been shut down. She’s in New York City and she had COVID really early on along with her roommates and got through it fine," Damon said.

He also had high praise for Ireland's Taoiseach (Prime Minister) Leo Varadkar, who re-registered as a doctor to fight the pandemic.

Damon said "You’ve got a [Prime Minister] who just goes to the hospital and starts working, I mean what a badass, it’s just on another level”

He told Spin that he and his family plan on staying in Dublin until the end of his children's school year.

“Look, we’re staying. We were supposed to leave last week because the movie was meant to be done by now but we’re staying ‘til the end of the kids’ school year just because it’s so peaceful here and everybody’s handling it so well," Damon said.

"You walk down the street, everybody’s minding all the guidelines.”

Last month a photo of Damon carrying a SuperValu bag (an Irish supermarket) went viral. The star revealed to spin that the bag was full of towels for him and the kids as they'd just taken a dip on the local beach. The photo had garnered traction online in Ireland where locals guessed Damon had a "bag of cans".

Damon responded by saying "To be fair, I’m sure there were cans in there originally, we just had to take ‘em out to put the beach towels in.”