Singer Lewis Capaldi was served four pints of Guinness in one "mega" glass (yes, really!) while at Town Square in Belfast last weekend. 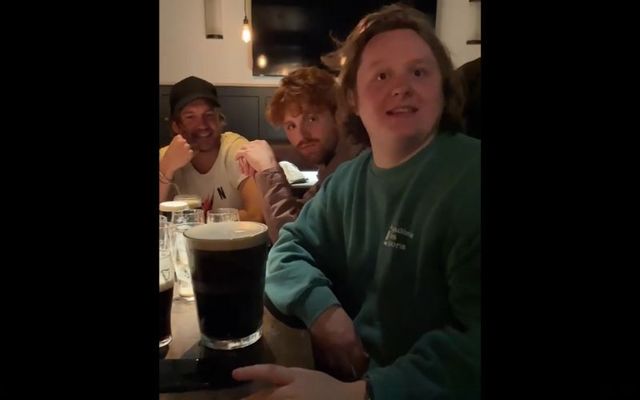 Lewis Capaldi was surprised with a "mega pint" of Guinness at Town Square bar and restaurant in Belfast. Town Square @townsquarebelfast, Facebook

Scottish singer Lewis Capaldi got a "mega" surprise when he ordered a pint of Guinness at a bar in Belfast.

Capaldi, the 25-year-old singer from Glasgow, Scotland, was in Northern Ireland to perform at the Belsonic Festival at Ormeau Park, his biggest ever headline gig in Belfast.

Following his performance on Sunday, Capaldi and his friends headed to Town Square to whet their whistles.

However, after ordering a pint of Guinness, the staff decided to serve Capaldi a "mega pint".

The massive glass, which contains exactly four pints of Guinness, has to be held firmly with both hands and is not for the faint-hearted.

In the video posted online by Town Square, Capaldi is seen eyeing up the pint with a surprised grin on his face and saying "Oh Wow! Thanks!"

In the background, a fellow customer encourages him to "split the G" which, as all Guinness lovers know, is when on your first gulp you drink enough to where the black of the pint is directly in line with the line in the middle of the "G" in Guinness.

Capaldi has recently taken a break from social media to focus on producing his second album, His 2019 album, "Divinely Uninspired To A Hellish Extent" spent 15 non-consecutive weeks at the top of the Official Irish Albums Chart.

In 2019, Capaldi shared on the TodayFM radio show that he has Irish roots on his mother’s side of the family, who come from Co Donegal.

Capaldi, who has Italian roots on his father’s side, said his mother’s grandmother, his great grandmother, moved from Donegal to Scotland years ago.

“I haven’t heard the story of how my mum and dad met but I’m sure it goes something like: Irish people love ice cream,” joked the Grammy-nominated singer.

After learning the Irish word for ice cream, he remarked: “My mum loved my dad’s uachtar reoite.”

U2's Bono reveals half-brother who he "adores and loves"