Joe Biden said a lot without saying much at all about the recent op-ed that urged his wife Dr. Jill Biden to stop using her doctorate title. 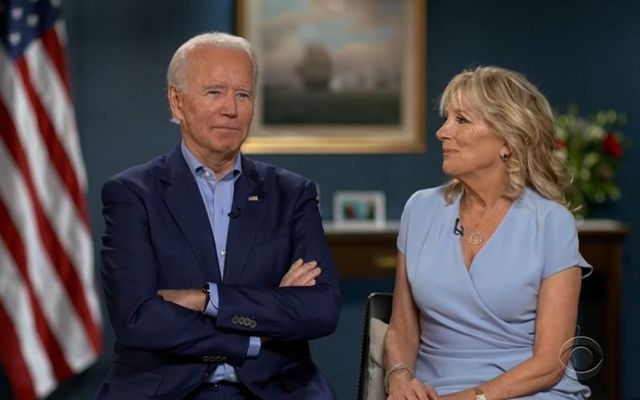 President-elect Joe Biden was responding to the recent op-ed that suggested his wife, First Lady-elect Dr. Jill Biden, should "drop the 'Dr.' before her name."

President-elect Joe Biden and First Lady-elect Dr. Jill Biden sat down with Stephen Colbert for their first interview since the presidential election this week.

“Madame First Lady—Mrs. Biden—Jill—kiddo: a bit of advice on what may seem like a small but I think is a not unimportant matter. Any chance you might drop the “Dr.” before your name? “Dr. Jill Biden” sounds and feels fraudulent, not to say a touch comic. Your degree is, I believe, an Ed.D., a doctor of education, earned at the University of Delaware through a dissertation with the unpromising title “Student Retention at the Community College Level: Meeting Students’ Needs.” A wise man once said that no one should call himself “Dr.” unless he has delivered a child. Think about it, Dr. Jill, and forthwith drop the doc.”

Not surprisingly, the op-ed was met with fierce criticism. Why shouldn’t Dr. Biden use the title that she rightfully achieved?

After the op-ed and it's resulting blowback, Dr. Biden sort of responded in a tweet:

Together, we will build a world where the accomplishments of our daughters will be celebrated, rather than diminished.

When asked about the op-ed, Dr. Biden told Colbert: “That was such a surprise. It was really the tone of it - ya know, he called me kiddo.

“One of the things I’m most proud of is my doctorate. I mean, I worked so hard for it. Joe came when I defended my thesis.”

Proud husband Joe noted how he got to hand Jill her doctorate, which she earned after achieving two Masters degrees, on stage at the University of Delaware.

Dr. Biden went on to say: “But look at all the people who came out in support of me. I am so grateful, and I was just overwhelmed by how gracious people were toward me.”

Then, addressing the President-elect, Colbert said jokingly: "As a husband who loves this person, did you ever, ya know, want to get out a length of pool chain and go full corn pop on these people?"

Joe said, "The answer is - that's close- ," said before Jill interjected with a laugh, "No! The answer is no!"

Joe continued, “There’s some of these - anyway -" before Jill said again, “it was just the tone of it."

The President-elect then said with a smirk: “I’ve been suppressing my Irishness for a long time.”

Colbert replied: “It’s always a smart thing to do.”

The irony, of course, is that Biden, whose great-great-grandparents on his mother's side and two great-grandparents on his father's side all came from Ireland, regularly touts his Irish roots. He has even invited two notably Irish acts, The Chieftains and Irish violinist Patricia Treacy, to perform at his upcoming inauguration, and he has hinted that he would like Ireland to be one of his first official visits as President.

You can watch the clip of the Bidens with Stephen Colbert on his 'A Late Show' here: