President-elect Joe Biden officially won the electoral college with 306 votes which, by President Trump's standards in 2016, represents a "clear victory." 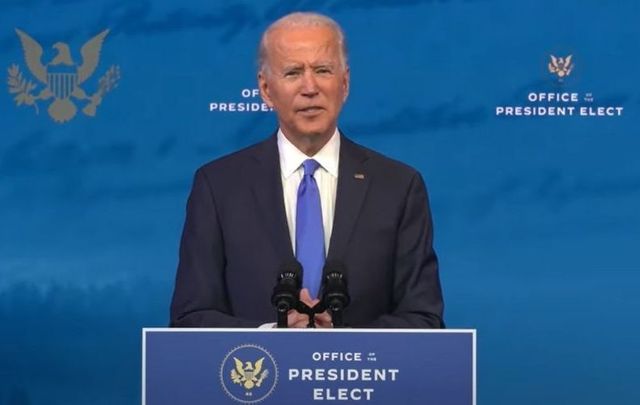 US President-elect Joe Biden officially received his 306 electoral votes on December 14, cementing his victory over incumbent President Donald Trump for the US Presidential election.

Late in the day on Monday, President-elect Biden delivered remarks while in Wilmington, Delaware that were streamed on television and online. In his roughly 11-minute address, President-elect Biden addressed the lawsuits mounted by the Trump campaign challenging the results of the election, as well as the ongoing pandemic.

"By his own standards, these numbers represented a clear victory then, and I respectfully suggest they do so now.”

Biden, asserting that that democracy “beats deep in the hearts of the American people," said: “In America, politicians don’t take power, people grant power to them. The flame of democracy was lit in this nation a long time, and we now know nothing, not even a pandemic or an abuse of power, can extinguish that flame.”

Regarding the “courageous” and “patriotic” Americans who managed the election at a local level, Biden reflected: “It is my sincere hope we never again see anyone subjected to the kind of threats and abuse we saw in this election. It’s simply unconscionable.”

He continued: “In America, when questions are raised about the legitimacy of any election, those questions are resolved through the legal process, and that’s precisely what happened here.

“They were heard by more than 80 judges across this country and in every case, no cause or evidence was found to reverse or question or dispute the results.”

“Even more stunning, 17 Republican attorneys general, and 126 Republic members of Congress, actually signed onto a lawsuit filed by the state of Texas. That lawsuit asked the United States Supreme Court to reject the certified vote counts in Georgia, Michigan, Pennsylvania, and Wisconsin.

“This legal maneuver was an effort by elected officials and one group of states to try to get the Supreme Court to wipe out the votes of more than 20 million Americans in other states, and to hand the presidency to a candidate who lost the electoral college, lost the popular vote, and lost each and every one of the states whose votes they were trying to reverse.

“Thankfully, a unanimous Supreme Court immediately and completely rejected this effort. The court sent a clear signal to President Trump that they would be no part of an unprecedented assault on our democracy.”

He added: “Even President Trump’s own cybersecurity chief, overseeing our elections, said it was the most secure election in American history. He was summarily let go.

“Let me say it again: His own cybersecurity chief, overseeing this election, said it was the most secure in American history.”

President-elect Biden thanked his former Republican colleagues in the Senate who have acknowledged the results of the electoral college, adding “I’m convinced we can work together for the good of the nation on many subjects. That’s the duty owed to the people, to the Constitution, to our history.”

Looking ahead, Biden promised to work for all Americans, including those who did and did not vote for him. He said there was “urgent work in front of us,” including getting the pandemic under control, getting Americans vaccinated, delivering immediate economic help, and building back the economy.

After Biden’s remarks, Vice President-elect Kamala Harris said in a tweet, “Over 155 million Americans voted—and the will of the people prevailed.”

As President-elect @JoeBiden said, our democracy gives Americans the right to have their voice heard, have their vote counted, and elect our nation’s leaders.

Over 155 million Americans voted—and the will of the people prevailed.

The same day that President-elect Biden officially won the majority of the electoral votes, President Trump announced that Attorney General Bill Barr “will be leaving just before Christmas to spend the holidays with his family” and that Richard Donoghue will be taking over the duties of Deputy Attorney General.

Joe Biden and Kamala Harris are set to be inaugurated on January 20, 2021.