Ed Sheeran was on Game of Thrones last night, and fans are not happy

The “Shape of You” singer was an unwelcome guest in what many felt was a bizarre scene in the season 7 premiere. 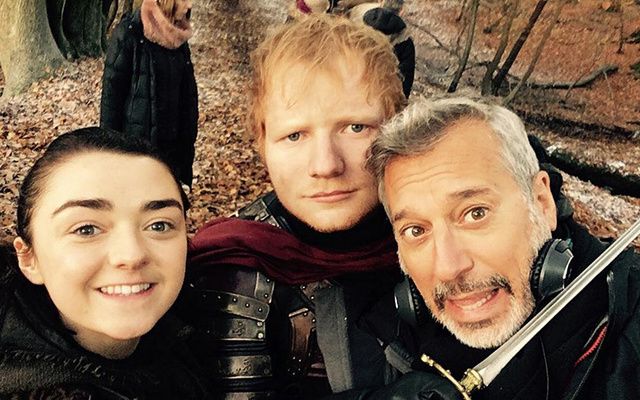 It seems nowhere is now safe from the musical man of the moment Ed Sheeran as he cropped up to much criticism in last night’s season 7 premiere of hit HBO show Game of Thrones.

It had long been rumored that the English singer-songwriter would be making an appearance in this season as huge music fan Maisie Williams, who plays the popular character Arya Stark, had been eager for her idol to make a cameo in the series.

“We knew that Maisie was a big fan of Ed Sheeran, and for years we’ve been trying to get him on the show so we can surprise Maisie. This year we finally did it,” co-showrunner David Benioff previously explained of the cameo.

why isn't this song already number 1 on itunes?
ed sheeran playing himself in game of thrones ladies and gentlemenpic.twitter.com/LSg8sD8RIE

Fans were not impressed, however, when they heard Sheeran's dulcet tones singing a campfire song that features in the books as William’s character Arya approaches a group of enemy Lannister soldiers in the woods.

Sitting down to eat with the soldiers, the “Shape of You” sensation receives plenty of air time in a rather bizarre scene break from Arya’s one-woman murderous quest for revenge.

Many fans were dismayed at the scene which they felt was carried out ungracefully and did not contribute to the episode.

ed sheeran was a big mistake. I'm not just talking about game of thrones here, I just mean in general.

Arya: I must kill all my enemies indiscriminately.
Arya: [sees Ed Sheeran sitting there]
Arya: Maybe I'd better hear these guys out

There have been some arguments, however, that the scene in question was a nod to an element of the books that the show has overlooked as they jump to the more action-packed storylines and better-loved characters. Much of the fourth book in the series, “A Feast for Crows” was about laying ground for what lay ahead with little happening in terms of plot but plenty of structure around the characters.

Missing three of the series’ main stars - Daenerys Targaryen, Tyrion Lannister, and Jon Snow - the book often looked at the effects of the endless wars and changing of rulers on the people who fought in the armies and how they ultimately felt about the constant battle for power among the ruling class.

As such, Arya’s scene with the Lannister soldiers gave an insight into how the common folk feel about their new Queen and what the reality of this war is for them.

There has also been speculation that the song in question could be acting as a premonition for the Lannister pairing remaining in King’s Landing: Cersei and Jaime.

In the books, Sheeran’s song “Hands of Gold” was a tune crafted by a scheming bard named Symon Silver Tongue who used it to blackmail Tyrion Lannister about the secret paramour he was attempting to hide from his family. As Tyrion eventually kills the woman Shae by strangling her with his father’s official “Hand of the King” necklace, the words of the song some back to him.

“He rode through the streets of the city,

down from his hill on high, O’er the wynds and the steps and the cobbles,

he rode to a woman’s sigh.

For she was his secret treasure,

she was his shame and his bliss.

And a chain and a keep are nothing,

compared to a woman's kiss

For hands of gold are always cold, but a woman’s hands are warm . . .”

Fans are now speculating that the song is being reused at this point in reference to twins and lovers Cersei and Jaime and the chance that the new Queen will meet the same fate as Tyrion’s paramour by being throttled by her brother and his substitute gold hand.

As with all theories, this could be completely inaccurate and Sheeran could simply just be insignificantly joining the long list of musicians who have already graced the show with their presence. Others have included Will Champion from Coldplay who appeared in the Red Wedding scene, Snow Patrol’s Gary Lightbody who appeared singing as a Bolton soldier, and Sigur Ros who sang “The Rains of Castamere” during Sansa Stark’s marriage to Joffrey Lannister. The band Bastille are also rumored to have filmed a scene for the upcoming season, making them the second big cameo this year.

What did you make of Ed Sheeran’s cameo? Did you enjoy the Game of Thrones Season 7 premiere? Let us know your thoughts in the comments section.