Dropkick Murphys will be streaming live from House of Blues Boston this St. Patrick's Day, March 17 - find out how to tune into their free live stream here! 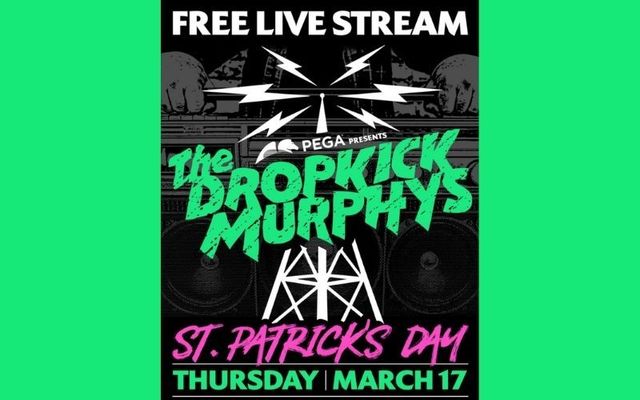 Dropkick Murphys will be streaming live from the House of Blues Boston on Thursday, March 17 for St. Patrick’s Day.

The Dropkick Murphys St. Patrick's Day live stream performance will feature songs from the band’s current album Turn Up That Dial, along with a variety of fan favorites.

This year—for the first time ever—fans worldwide will be able to come together to share the experience of this special performance and celebration via the Dropkick Murphys FREE live stream event which will be streamed at DKMStream.com as well as on YouTube and Facebook.

IrishCentral is delighted to again be teaming up with Dropkick Murphys to bring you their St. Patrick’s Day live stream. You’ll be able to tune in here on IrishCentral as well as over on our IrishCentral Facebook page at 9 pm ET / 6 pm PT on Thursday, March 17.

After two years and four live streams with no audience, we are very happy to announce that this year’s St. Patrick’s Day...

The March 17 performance is part of Dropkick Murphys’ customary run of St. Patrick’s Day week shows in their hometown of Boston, which this year includes three shows at House Of Blues and one at Roadrunner, Boston’s newest concert venue.

The St. Patrick’s Day live stream also marks the band’s first streaming performance with an in-person audience and their first Boston performance since the pandemic began, so it’s guaranteed to be a very emotional and memorable show.

Dropkick Murphys co-lead vocalist Ken Casey said: “After two years and four live streams with no audience, we are so, so, so excited to do our first live stream in front of a live audience.

"I think this will give people watching at home a much better feel of what it’s like to see Dropkick Murphys in our element."

Instead of charging for tickets to the Dropkick Murphys St. Patrick's Day Free Live Stream From House Of Blues Boston, donations will be taken via text to donate. Funds will help support charity via The Claddagh Fund, the band’s organization that raises funds for the most underfunded charities supporting vulnerable populations in Boston and Philadelphia.

It’s March 1 which means it’s Claddagh Fund SHIRT OF THE MONTH release day !! And since St. Patrick’s Day is around...

Dropkick Murphys kicked off their traditional St. Patrick’s Day Tour on February 21 in Reading, Pennsylvania. The trek features support acts The Bombpops and The Rumjacks on most dates, with Boston-based Jesse Ahern opening each show. Jim Lindberg of Pennywise is confirmed as a special guest for the final show on March 20 at Roadrunner in Boston, performing in support of his recently released Ted Hutt-produced solo album Songs From the Elkhorn Trail.

For the full list of Dropkick Murphys tour dates and to purchase tickets, visit DropkickMurphys.com.

As previously announced, vocalist Al Barr made the difficult decision to not join Dropkick Murphys on the road for this run of dates in order to help care for his mom, who was recently diagnosed with Lewy Body Dementia. Vocalist Ken Casey is taking lead for all songs on the St. Patrick’s Day Tour, with openers Jesse Ahern, Mikey Rivkees from The Rumjacks, and Jen Razavi from The Bombpops joining him on vocals for certain songs.

Along with Streaming Outta Fenway in 2020 – the first-ever concert performed on the hallowed infield of Boston’s Fenway Park – and the band’s Turn Up That Dial Album Release Party in 2021, these four free live streamed concerts (with no in-person audience) were watched over 17 million times, raised hundreds of thousands of dollars for DKM’s charity The Claddagh Fund and other nonprofits, and were featured right here on IrishCentral as well as on CBS This Morning Saturday, CNN, NBC Nightly News, The Late Show With Stephen Colbert, and in the Wall Street Journal, Forbes, and many more.

Dropkick Murphys proudly remain Boston’s rock ‘n’ roll underdogs turned champions. Since 1996, the boys have created the kind of music that’s meant to be chanted at last call, in packed arenas, and during the fourth quarter, third period, or ninth inning of a comeback rally.

Their celebrated discography includes four consecutive Billboard top 10 album debuts (2021’s Turn Up That Dial, 11 Short Stories Of Pain & Glory, Signed and Sealed in Blood, Going Out In Style), along with 2005’s gold-selling The Warrior’s Code, featuring the near double-platinum classic “I’m Shipping Up To Boston.”

In 2020, the band was one of the first to embrace streaming performances, starting with their Streaming Up From Boston St. Patrick’s Day virtual performance. It was followed by last year’s landmark Streaming Outta Fenway live stream, which drew more than 5.9 million viewers and held the #3 spot on Pollstar’s “Top 2020 Livestreams” chart. Dropkick Murphys St. Patrick’s Day Stream 2021...Still Locked Down, was #1 on Pollstar’s Livestream chart for the week ending March 22, 2021, logging over 1 million views.