Irish American host tells The New York Times “I’m Irish and I need all the luck I can get.” 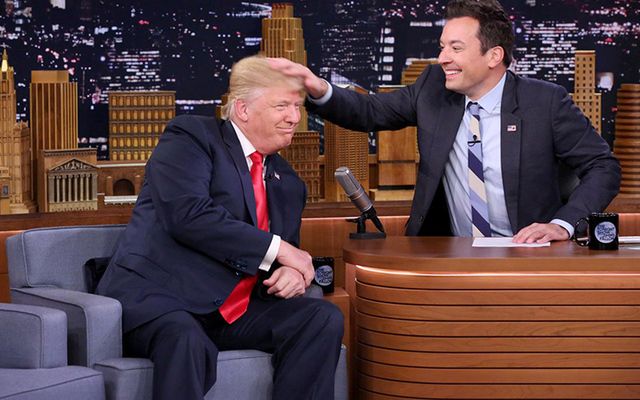 Jimmy Fallon tells The New York Times “I’m Irish and I need all the luck I can get,” in his latest interview.

He needs that rub of the green. After a seamless rise to the top following Jay Leno's retirement from "The Tonight Show," Fallon has been coming down to earth with a bang.

The reason can be summarized in one word.

Ever since the 45th president started running for the White House he has been the hottest guy on the planet, people either love him or hate him.

The impact on late night comedy has been incredible. Political satire and biting wit has become the path to stellar ratings.

A political humorist Fallon is not. He showed how tone deaf he was in an interview with Trump in September at a time when the presidency was on the line.

Fallon treated Trump like how a friendly tail-thumping doggie treats his master when he comes home.

He concluded the show by tousling Trump’s hair, a video shot that has come back to haunt him, something he now freely admits. The critics and late night America fans reacted with fury

“They have a right to be mad,” Fallon told the Times this week. “If I let anyone down, it hurt my feelings that they didn’t like it.”

Fallon knows the score, but won’t go the full-monty on Trump. “I don’t want to be bullied into not being me, and not doing what I think is funny just because some people bash me on Twitter. It’s not going to change my humor or my show.”

Colbert now regularly draws more than three million viewers, while Fallon has slumped to 2.7 million. The golden boy of late night has lost his gilded throne. It all goes back to that infamous Trump interview.

“I didn’t do it to humanize him,” Fallon told The Times “I almost did it to minimize him. I didn’t think that would be a compliment: 'He did the thing that we all wanted to do.'

“I’m a people-pleaser,” he said. “If there’s one bad thing on Twitter about me, it will make me upset. So, after this happened, I was devastated. I didn’t mean anything by it. I was just trying to have fun.”

He tells The Times his refusal to address the issue cost him hugely. “I didn’t talk about it, and I should have...I tossed and turned for a couple of weeks, but I have to make people laugh,” he said. “People that voted for Trump watch my show as well. There’s only so many bits you can do,” he said. “I’m happy that only 50 percent of my monologue is about Trump.”

“Jimmy is not a political comedian, so it would be very phony of him to go out and do long political joke rants just because that’s what some people want,” Ms. Fey said in an email to the Times. “‘The Tonight Show’ has historically been a friendly, light show.”

Irrespective of what happened Fallon may have to change or die as a recent critical column headlined “Colbert Rides a Trump Wave, While Fallon Treads Water” made clear.

The lovable, happy go lucky Fallon is operating in an atmosphere of intense anger and partisanship. In a calmer era, he would still be king but now the crown has been toppled. How long he will last as a result remains uncertain.

He needs that Irish luck.