Why is there so much love for new show "Derry Girls?"

A review of Derry Girls from the cast to the soundtrack. 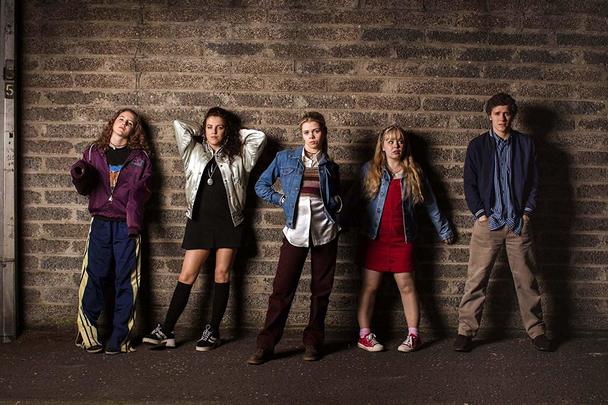 A review of Derry Girls from the cast to the soundtrack.

Set against the backdrop of Northern Ireland's Troubles, "Derry Girls" depicts a group of Catholic teenagers coming of age in the 1990s.

The show became the most-watched TV series of all time in Northern Ireland last year and has since been picked up by Netflix, earning it international critical acclaim.

So why has "Derry Girls" been such a smash hit around the globe?

The "Derry Girls" cast is amazing

Five teenagers—four foul-mouthed girls and an unpretentious boy stuck in an all-girls school, what could possibly go wrong!? This talented cast weaves together terrific comedic chemistry while illuminating their characters' vulnerabilities in colorful yet emotive ways.

Erin, a 16-year-old "wannabe writer," is the show's main character who runs into problems wherever she turns. At home, she faces her tough mother and long-suffering father (played by the comedic genius Tommy Tiernan).

Her friends don’t exactly aid her cause by getting into all sorts of problems both inside and outside of school. Throw in some growing pains and British Army checkpoints around every corner and you can see why this is one girl who makes for interesting viewing!

Michelle, the foul-mouthed troublemaker of the pack is never far from mischief, somehow always dragging the rest of the group into bad situations. A viewers favorite for simply not giving a f***, her "sláinte motherfuckers" remark before accidentally burning down a flat perfectly encapsulates her appeal.

Orla is Erin’s permanently spaced-out cousin, who lives with her and has a penchant for the strangest one-liners at the best possible moments.

Clare, the sweet-faced swot is arguably the sensible one of the group, but still winds up in all the drama.

Then there’s James, Michelle’s clueless and spineless English cousin who finds himself in an all-girls Catholic school for fear of his safety at the local boy's school.

It has the best crafty one-liners

If you've seen the show already you'll know all about the canny and hilarious one-liners. Here are just a few:

“If anyone is feeling anxious, worried or maybe you just want a chat, please, please do not come crying to me.” – Sister Michael.

“Don’t say knickers in front of your father, he can’t cope!” – Ma Mary.

Read More: "Derry Girls" get their own mural in Derry City

The "Derry Girls" soundtrack is killer

Music has a unique way of helping people relive moments or special times in their lives. For viewers growing up in the 1990s, listening to the show's soundtrack is a throwback to their own impressionable teenage years, flooding back memories of school, first romances and long summer holidays.

Hits like The Cranberries "Dream," Cypress Hill's "Insane In The Brain" or "Jump Around" by House of Pain instantly hits those nostalgic nerves.

The Cranberries song, "Dream," features in the Derry Girls soundtrack.

Omg the soundtrack in Derry Girls is taking me back to the most wonderful, awkward memories of my younger self! Love it! #DerryGirls #NetflixTH

Episode 4 of Derry Girls has the most killer soundtrack - I totally know all those Whitfield’s Saturday Night dance moves; Girls & Boys by Blur; & closing with a Heart of a Women.

"The Troubles," was a violent sectarian conflict that erupted in 1968 between Catholic Irish nationalists, seeking unification with the Irish Republic to the south and Loyalist Protestant paramilitaries who supported continued British rule. The conflict left some 3,600 people dead and officially ended in 1998.

"Derry Girls" breaks new ground by making light of the conflict in a comedic way through popular culture. For the most part, the characters are more entrenched in their own world of growing up and fitting in, than caring about a low-level war festering in the background.

A British Army checkpoint from a scene in Derry Girls. Image: IMDb

The "Derry Girls" ending is heartbreaking

Every good show signs off with a captivating and engaging ending. Just before the final scenes unfold, viewers have become attached and emotionally invested in the characters' storylines, waiting for answers to the various plots.

While an ending obviously concludes a story, the best are those which offer answers yet simultaneously pose new questions. The "what if's" and "whys," leaving the viewer yearning for more.

Without spoiling the ending for those who've yet to watch "Derry Girls" in full, trust us, it delivers!

I know I'm very late to this, but Derry Girls is just so, so good. And that ending is up there with the final scene in Blackadder Goes Forth for its beautiful poignancy.

The "Derry Girls" script is outstanding

So much credit must fall the way of Lisa McGee who wrote the script. It was her vision and creativity that has produced an outstanding show populated with engagingly funny characters everywhere you turn.

Her courage and foresight to make light of a difficult period in Northern Ireland's history has produced what the Hollywood Reporter has described as "comedy gold."

Watch the new trailer for Derry Girls Season 2 below.

Why do you love "Derry Girls?" Let us know in the comments section below.