Can you understand the accents on this hit Irish TV show?

Derry Girls is in English, but people are saying they need subtitles to understand the Northern Irish accents. 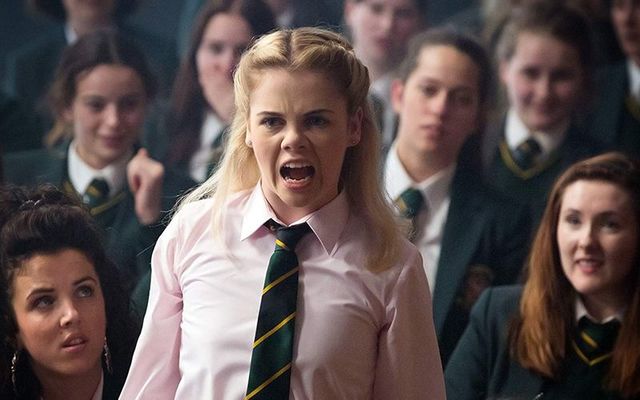 Some American viewers are apparently having a hard time understanding the accents in the hit Irish TV show Derry Girls, which came to Netflix in December. Derry Girls is in English, but people are saying they need subtitles to understand the Northern Irish accents.

Written and created by Lisa McGee, Derry Girls follows the travails and shenanigans of a group of teenage girls (and a boy whom they think of as one of them) in 1990s Derry. The Troubles are ever-present in the background, but they are not the main focus of the show; it is very much a comedy.

After premiering on Channel 4 in January 2018, the groundbreaking series quickly gained fans and critical acclaim throughout the island of Ireland, becoming the most watched series in Northern Ireland since viewership record-keeping began in 2002. It was only a matter of time before Netflix swooped in to claim it for international distribution, with Derry Girls debuting on Netflix on December 21, 2018.

American viewers are loving Derry Girls, too, but many aren't quite sure what to make of the accent!

Read More: Derry Girls star Tommy Tiernan hints a movie could be on the way

Some 100% need subtitles in order to follow the plot:

If you guys have netflix and wonder what to watch I recommend Derry Girls, its really funny, but turn on subtitles cuz that Irish accent is heavy lol

I'm usually okay at understanding accents in TV shows, but 10 minutes of Derry Girls has me reaching for the subtitles.

Well played Ireland. You win this round.

Do yourself a favor and check out DERRY GIRLS on Netflix! You’ll need to subtitles on to decipher the accent and you still won’t understand about 1/4 of what they are saying but it’s brilliantly written and full of wonderful performances. Fun times! #DerryGirls pic.twitter.com/mHR0waW7wO

Had to turn on the subtitles for Derry Girls. Obviously still not as Irish adjacent as I’d like to think.

While others are so captivated by the accent it's taking over their internal monologues:

my inner monologue is now going in a thick, nearly incomprehensible Irish accent now, thanks to #DerryGirls.

I hope it will make American Derry Girls fans feel better to know that my mother, with whom I binged Season 1 in one sitting over Christmas, also needed subtitles to understand what was going on, despite having an Irish accent herself.

But that's one great thing about the island of Ireland - so many different accents in a relatively small geographic area.

Give a listen to the clip below and let us know in the comment section or on Facebook if you can understand what the Derry Girls are saying, without the assistance of subtitles!