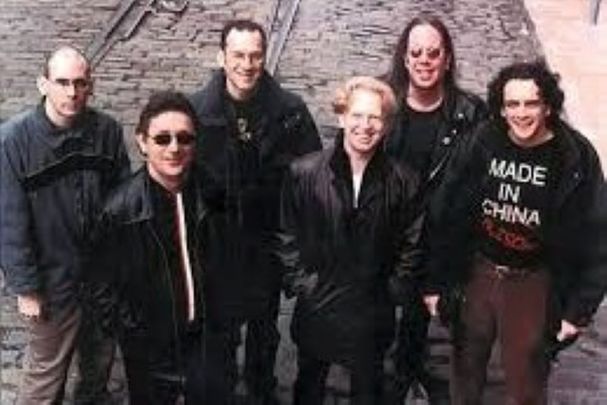 Editor's Note: In the coming weeks, Larry Kirwan and IrishCentral will look back album by album on the history of Black 47 and their rise to fame. Below is the twelfth installment of the series about the recording of Black 47's "Elvis Murphy's Green Suede Shoes."

The previous installment in the series, "Larry Kirwan on ‘New York Town,’ Black 47's first album after 9/11" can be read here. You can find all of the stories in the series here.

But first, a note from Larry himself, written February 20, 2020: “To my mind, Elvis Murphy’s Green Suede Shoes was a placemark between the New York Town and Iraq albums.  And yet this album is often cited as a fan favorite. Uncle Jim is usually in the Top Ten best selling Black 47 songs on iTunes. The songs range all over the place, from Belfast to Baghdad, Dublin to Liverpool, Wexford to New York City.  It celebrates some of my favorite characters, Jim Larkin, John Lennon, the beautiful bisexual Girl Next Door, and an array of characters from the legendary Bells of Hell saloon on 13th Street & 6th Avenue, including but not limited to Malachy McCourt, Lester Bangs, Nick Tosches, Billy Altman, Pierce Turner, and Dennis Duggan (Columnist for Newsday). It’s definitely throbbing with memories and should be played loudly while reading my memoir, Green Suede Shoes, and imbibing the drink of your choice.”

The Elvis Murphy CD was planned as a companion to my book 'Green Suede Shoes – An Irish-American Odyssey.' But the music business demands that you release a new CD whenever you have a yearning for publicity, and especially if you intend touring. For a band like Black 47 that often plays up to 50 weeks of the year we were in constant need of new releases.

The memoir, Green Suede Shoes, was song-based. I had been wrestling with a new novel but was having problems with its structure. The publishers wanted a follow up to Liverpool Fantasy as it had sold well. Finally, impatient with the delay, they suggested taking some of the Black 47 narrative songs and writing stories around them. I had no notion of writing a memoir but within a couple of songs, it became obvious that's what was happening. As the work progressed there was a need for new songs to fill in the narrative gaps; hence, Far Side of the Wall, Bells of Hell, Uncle Jim and The Day They Set Jim Larkin Free.

The Girl Next Door had been a popular Turner & Kirwan of Wexford song that always seemed like it would suit Black 47. Into The West was one of my favorites from the early days of the band. It had been commissioned as the title song for the American release of the Jim Sheridan movie. At the last minute it got bumped for a gentler theme that would appeal to children – or so the record company said.

Whatever! Black 47 fans have always loved the song – so we re-recorded it.

Liverpool Fantasy was the title song from my play of the same name. It's life as John Lennon sees it - never having left Liverpool (hey, at least he's alive). The Lennon character sings it in the play. I guess I'm probably the only one to ever put words in John Lennon's mouth!

The album is rounded off by three songs from my solo CD, Kilroy Was Here, History of Ireland Part 1, Kilroy itself, and maybe one of my favorite self-composed songs, Life's Like That, Isn't it?

It was somewhat of a bleak time. Both my parents had recently passed on. However, for the most part, the album is driving and rocky, an obvious attempt to emulate WB Yeats' dictum on balance - "poetry should be as cold and passionate as the dawn." There's some really fine horn/pipes and rhythm section playing curried by a general abandonment.

Two things were unfolding during this period, we were under intense pressure live from performing Downtown Baghdad Blues. There was a feeling in the country that any kind of dissent against the war was unpatriotic and we were taking great heat while rock music was generally mute on the subject, particularly in the early years. To my mind, we were the only band out there hammering home the message nightly that the war was a huge mistake and would have grave repercussions for the country.

The other was that our comrade and bass player, Andrew Goodsight was contemplating leaving the band and moving out of New York. Andrew was a very popular member who had stepped into the breach way back when Kevin Jenkins left. A multi-talented musician and all-round character, he left an indelible mark on Black 47 through his musicianship and stage presence.

I recall very little of the recording sessions but I have a number of luminous memories of walking towards Broadway with Hammy after rehearsals. The nights were dark and blustery and we laughed a lot remembering friends from Major Thinker days and characters from the downtown scene over the previous decades. Perhaps that's why I always get a warm Autumn feeling whenever I hear a track from this album. — Larry Kirwan

Good news for those planning to celebrate St. Patrick's Day with Irish-American rockers Black 47 at the Middle East on Sunday. The New York band's new album is the catchiest, most accessible thing it has made in ages. It is not as insular and literary as 2004's "New York Town," even though it's the companion album to bandleader Larry Kirwan's new memoir, "Green Suede Shoes." It's first and foremost a collection of excellent songs. 'Far Side of the Wall' is a melodic hymn to "bleary days," "blazin' years" and "breakin' through" - like a Springsteen lyric, but with pipes as well as sax and Stratocaster. 'Downtown Baghdad Blues' is a gritty soldier's lament that dares to rhyme "land of Giuliani" with "Ayatollah Sistani." 'Elvis Murphy' tells of young Larry's rock 'n' roll awakening. And the potent 'Liverpool Fantasy' imagines the thoughts that might have boiled in John Lennon's brain if he'd never made it out of the old neighborhood (the subject of Kirwan's 2003 memoir of the same name). The album is drenched in Kirwan's obsessions: New York, politics, Ireland's struggles, the immigrant experience, boozing, rock as liberation. His passionate bray does put off some. But for those who love this scrappy band, the new album is an excellent early St. Pat's present. — Joel Brown Boston Herald

Elvis Murphy's Green Suede Shoes is Irish music that can lift the roof beams with guitars and saxes – but can also break your heart with the personal histories the songs evoke — Ft. Lauderdale Sun-Sentinel

What's your favorite Black 47 album? Let us know in the comments!