Larry Kirwan says "New York Town" is "a love letter to the city we knew before the attack and a determination to celebrate what we still had after." 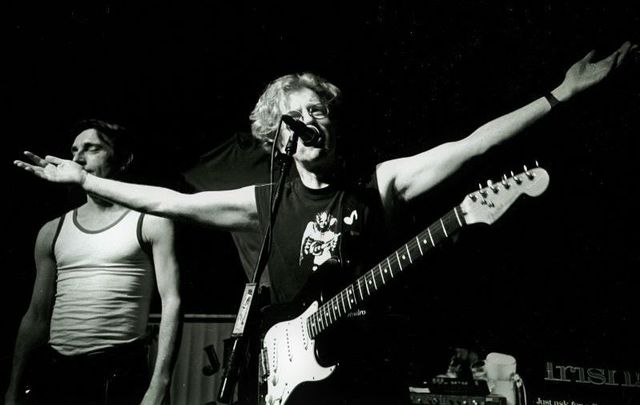 Editor's Note: In the coming weeks, Larry Kirwan and IrishCentral will look back album by album on the history of Black 47 and their rise to fame. Below is the eleventh installment of the series about the recording of Black 47's "New York Town."

The previous installment in the series, "Black 47's Larry Kirwan looks back at his solo album 'Kilroy Was Here'" can be read here. You can find all of the stories in the series here.

But first, a note from Larry Kirwan himself: “The moment the first plane struck you instinctively knew that New York changed.  Almost 19 years later you didn’t realize it would change so much. In the months after 9/11, midtown was deserted at night, you could jaywalk right across Times Square with little thought of even dodging a vehicle.  Mychal, Richie, and so many other friends were gone. It was out of that cauldron that New York Town was created – a love letter to the city we knew before the attack and a determination to celebrate what we still had after.”

Read More: Remembering the Irish and Irish Americans lost during the 9/11 attacks

And then it happened. One moment I was checking the Mets' score, the next my face was buried in the newspaper. That first plane came over so low, so loud and so fast I thought it was going to come right through the walls. As I raised my head relieved that the sound was receding, I heard the thud.

It was markedly different than the sound of planes crashing in the movies or television. No screech and clang of glass and metal tearing, more like some huge Paddy swinging his sledgehammer down on a concrete pathway; a dull, but awful, thump that I can still summon up.

Like many, I ran down to the street but in my neck of the woods, the buildings are tall. So, I raced back up to our roof. People were already lined up and gazing the short distance south. The sight was unbelievable, a plane gouged into one of the Trades, thick clouds of smoke belching out, and from that blackness, tiny tongues of fire licked the remnants of the collapsed walls. From time to time, little gales of glass would explode outwards and shower the crystal clear sky. Black shapes and forms launched forward then dropped, gathering speed in descent.

And as we gazed in wonder and confusion we couldn't see the second plane colliding from the south, but we felt its impact and, with that, innocence fled. So, the first plane had not been an accident. What was coming next? Then one of the Trades collapsed, swiftly, orderly, in a neat pile downwards. Who were these attackers and how could they achieve so much so effortlessly? Had they already laid explosives in the cellars? At that moment they seemed invincible, for the second tower crumbled in the same orderly manner.

And as we marveled and swore at what had transpired the sky suddenly seemed to explode as two jets came screaming south and banking overhead. Was this more of the same? No, it was the US Air Force. A little late in the day but they sure as hell frightened everyone in my vicinity.

Black 47 returned to Connolly's the following week. The idea was to try and persuade people to come back into the city – to show that life was continuing. I remember one night jaywalking across Times Square – there wasn't a car or taxi to dodge, it was deserted, like a cowboy movie when you see the sagebrush blowing down the empty street.

The audience was composed of first responders: cops, firemen, EMS people, along with the mad, the bored and the lonely. Though the newspapers were full of the names of the victims, many of us didn't know who had survived. Everyone watched the door and you'd feel a collective sigh of relief when someone would enter – at least, he or she was still alive! The gigs were strange – subdued at first, then often close to manic with wild and sudden mood swings; it wasn't unusual for someone to break down crying in the middle of a sentence, or just drink up hurriedly and head off alone into the night.

Life in the band was beyond strange too. We were looked on as ambassadors for New York when playing outside the city. In the tri-state area, it wasn't unusual for someone to approach with a photo of a fan and ask that we play his or her favorite song in memory. It was hard when you knew the deceased, even harder when you didn't – to think that someone was so invested in you and you didn't even know their name. That was the atmosphere from which New York Town emerged. The idea was to celebrate New York City – both before and after 9/11; to capture the town that we all knew and to show some of the flames and ashes that each New Yorker had walked through.

Hence there were songs for each borough and often for specific areas and even streets. We asked friends to join us on some of the songs: Livin' in America – 11 Years on with Mary Courtney for Bainbridge Avenue in The Bronx; Staten Island Baby with David Johansen; Brooklyn Goodbye with Suzzy Roche. Fiona's Song (for Sunnyside, Queens) with Rosanne Cash and Eileen Ivers; Blood Wedding for the Lower East Side with Christine Ohlman; I won't Take You Home Again, Kathleen for Rockaway.

And then there were songs for people, Fatima (with Ashley Davis) for the many Muslims who had been killed; San Patricio Brigade for the Latinos who went down, and a couple of songs for individuals. Mychal needs no introduction now. Father Mychal Judge, OFM, was chaplain of the NYFD and a regular at Black 47 shows. In my mind's eye, I can still picture where he liked to stand. I think he came to our gigs because he adored being at the center of things, liked being part of a scene. He was a beautiful man, full of life and compassion, with a deep understanding of human frailty. He was the most giving person I ever met and like thousands of New Yorkers, I miss him.

Orphan of the Storm may be my favorite song from the CD. It has an odd story. Most of the songs just flowed forth; it was like a dam bursting as I didn't really write anything in that first long year. I was working on one last song but I couldn't quite nail it. We had already booked the recording studio and had scheduled a final rehearsal for later that evening. In frustration, I lay down on the couch and dozed off.

I awoke with the intro of Orphan ricocheting around my brain. I felt bitter and had no idea why. I played the intro on the piano in the key of E and immediately a verse and chorus suggested themselves with full chording. I instinctively knew the title and as soon as I put it on paper, I experienced a strange anguish. The words came tumbling out – there was little editing. Even the complicated bridge with its odd chording flowed freely. I'd often heard of automatic writing but had never experienced anything like it. Perhaps, it was just the stress and an overwrought imagination, but I always had the feeling I was telling someone else's story.

Read More: The Irish pub that became home base for Ground Zero workers after 9/11

Black 47, New York Town (***1/2) Too long relegated to the fringes, this Irish-American band belongs to the diminishing ranks of rock acts that balance serious sonic thump with intelligent social commentary. The title track, featuring singer Suzzy Roche, raises questions about the causes of 9/11 as powerfully as anything on Bruce Springsteen's The Rising. Guest Mary Courtney is the beleaguered wife and mother on Livin' in America - 11 Years On, a riveting saga of strength and melancholy. Black 47's ire reaches back to the Mexican-American War in San Patricio Brigade, about the U.S. Army's Irish deserters who fled a dead end of poverty and discrimination to fight for the enemy. Poetic yet unambiguous, Town's provocative themes and unsentimental stories give Black 47's music both purpose and passion. — Edna Gundersen USA Today

Black 47 New York Town (****) Larry Kirwan and his Irish rock band use musical voicings ranging from folk to rock to hip-hop to craft this literate and lilting love letter to the city they now call home. Joined by guests including Rosanne Cash, David Johansen and Suzzy Roche, they pay tribute not only to a city that never sleeps but to a metropolis that has spent a fair share of sleepless nights since the events of Sept. 11, 2001. Kirwan and company craft their most engaging, engrossing recording to date, a bracking musical experience that is also insightful and intelligent. — Jeff Wisser Chicago Sun Times

With New York Town, Larry Kirwan and his enduring Irish-rock outfit have drafted an engaging and heartfelt love letter to their adopted hometown that certainly unfolds under that shadow of Sept. 11, but never brings it front and center… Kirwan's singular, evocative vocals are augmented by a large cast of guest stars in place of its raucous background rests a more assured, more literate band. — Billboard

New York Town is an insider's love poem to New York City, compressing 160 years and five boroughs into a series of musical sketches. It's a world full of broken heart and hard times, long nights and short lives, of women chasing dragons with razors in their garters, with flashes of Latin and satin…New York Town consequently, is a great Irish-eyed view of the Big Apple – sordid, romantic, and sober only in hindsight. — Phoenix New Times

With cinematic sweep, this one ranges across all five boroughs and beyond… from Irish history sagas to heartbreaking domestic dramas with his usual keen eye and down-to-earth literary flair, while maintaining a touch for the lighthearted. — Philadelphia Inquirer