The tenth installment of the series about the recording of "Ten Bloody Years." 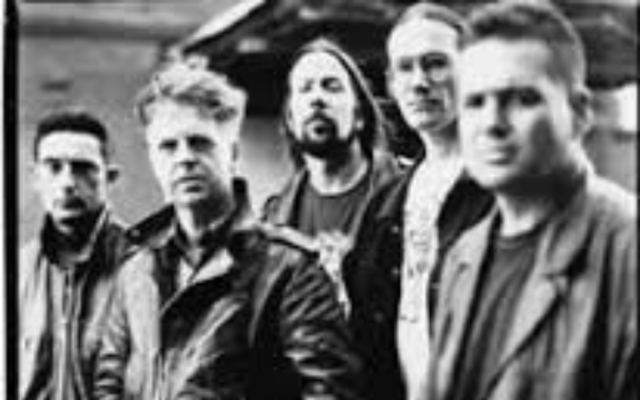 Black 47 on Home of the Brave. Larry Kirwan

In the coming weeks and months, Kirwan and IrishCentral will look back album by album on the history of Black 47 and their rise to fame. Below is the tenth installment of the series about the recording of "Ten Bloody Years." But first, a note from Larry's himself:

Black 47 spanned two centuries but I have to say that the ‘tude as we called it never changed.

We did it our way whether it was playing for five people in some smoke-filled dive in the Bronx or 50,000 at Farm Aid. And that’s really the only way you can survive the music business.

Don’t let’s even compare that experience to driving a taxi, or working on a construction site.  You’re playing music, getting free booze, and even though you might have 200 miles to travel home that night, you don’t have to carry buckets of cement up some rickety ladder the next morning.

But you do have to look someone in the eye every night – be it promoter, critic or punter - and more or less say “I’m right, you’re wrong.”

That’s what makes Rock ‘n’ Roll tribal and why so many people burn out. The minute you stop believing in yourself it’s over.

Criticism is just one person’s opinion and it’s something you have to block out. On so many occasions you’re forced to ignore everything around you except the music. But always there’s the next gig, the next shot of Jameson’s to get you through a bad night, and the next opportunity to allow one of your songs to develop enough to blow away an audience.

Chris Byrne was an amazing person to form a band with. We were an unlikely duo – a cop and a failed rocker who got together with no particular plan except to make political and riotous music. Looking back on it we were probably more alike than either of us thought – driven, relentless people who were as political as we were musical.

We stood shoulder to shoulder in some of the roughest bars you can imagine, and over four sets we’d play to people who hated the very thought of originality, who only wanted to hear a band play muted covers of songs that they could have had for a quarter in the jukebox.

It got easier with time – we got better and people who actually did like our music and attitude began to show up.

Then around the turn of the century, Chris wanted to do his own thing with Seanchaí, made a success of it and continues to do so.

We had ten amazing years together when we took a band from bucket-of-blood pubs in the Bronx to Leno, Letterman, and O’Brien, and became the talk of the town in the capital of the world.

It was a dizzying time with little opportunity for reflection – always onwards to the next gig, album, interview, party, and we left a trail of fine songs and riotous performances behind us.

There were problems – personal and otherwise – a bad van crash, a shooting, friends dying too young, and so many other incidents I’ve long forgotten.  But there’s many an occasion I’ll be out for a drink and hear one of the old songs explode out of a digital jukebox, and remember a time when we were fresh and new and turned New York City and Irish-America on its ear.

The following is an account written back in September 2000 about the release of the “10 Bloody Years” CD by Black 47.

When Danny Goldberg was fired as president of Mercury Records, Black 47 got the boot too.  However, twice bitten - twice shy, we had already been recording new songs. Randall Grass, head of Shanachie Records, heard that Black 47 had a new CD that was available for release and Bob's your uncle, Fanny's your aunt, we were signed, sealed and delivered in two shakes of the proverbial ram's tail.  “Trouble in the Land” was soon on the streets. Another record company - keep your fingers crossed! “Trouble” has engendered the best press we've had since the release of “Fire of Freedom” and continues to sell.

Michael Hill, however, head of A&R at Shanachie, thought that it would be a good idea to reintroduce us to press and radio by way of a compilation called “Ten Bloody Years.” We took songs from our previous CDs and included some favorites that are hard to get right now - “Into The West,” “Our Lady of the Bronx” and “Patriot Game.”

I've already written about the latter two but “Into The West” was a song commissioned by EMI to be the title track for the American release of Jim Sheridan's great movie of the same name. I based the song on Gabriel Byrne's character.

To make a long story short, we recorded “Into The West” and everyone loved the song. Unfortunately, when the movie came to be released in the USA, the marketing department of the film company decided it should be aimed at children, and our song was deemed to be too adult in nature.

The song was relegated to about 20 seconds play from a car radio as the boys are hitching to the West of Ireland. Such is Hollywood - such is life. Still, I've always loved the song and its bittersweet message of redemption.

It was nice, if a little odd, however, to look back over the band's career and piece together some old songs into a coherent CD. In fact, it was downright difficult. We've never released anything that doesn't meet a certain standard and, thus, all the songs are like children - how do you say which ones you prefer - they're all your flesh and blood?

In the end, I gave Michael Hill a list of what I considered some essential songs and he culled “Ten Bloody Years” from it. After all, how do you mix the political, with the Irish, the rock with the reggae, the hip-hop with the noise, the joy with the sadness, the all-round craziness and the to-hell-with-commerciality? I couldn't do it. But I think Michael did a very credible job.

In fact, how can you sum up all of the last ten years into these pages? How do you mix all the memories, the faces, the miles traveled, the journeys, the good times and the bad?

It's been one hell of a ride. Chris and I had no idea when we came up with the idea of Black 47 on that night in Reilly's in late 1989 that the band would last this long or have such an effect on so many people.

And now, Chris has gone on his own way to do his own thing with “Seanchaí,” and I'm sure it will be a great thing too. All I can say for myself is that I've been very lucky to have had someone like him and the other guys playing beside me down the years.

There are so many things I could talk about but one jumps into mind. It's not the greatest or most significant - but that evening in EMI's offices back in 1995 as we sat listening to the new president Davitt Sigerson give his belittling speech - "I have no hesitation in dropping bands from my label…" - I caught Chris' eye.

The words were unspoken but the thought was clear as a bell - "Who the fuck does this guy think he is?"

I guess that about sums up the way we looked at the music business, the world, and our place in it. And for all Chris' talents and everything he gave to Black 47, that's the attitude I'll miss.

But life goes on. We have a new piper, Joseph Mulvanerty, who has fit in like a hand in a glove and brought us new energy, musicianship and a rare sense of humor. We'll probably do a new live album this March and I'm working on songs for the next studio CD which just might be called "Rise Up" if I can ever do Jim Larkin justice - that would square the circle for me and complete a trilogy of songs about the holy trinity of the Revolutionary Irish Socialist movement - Connolly, Markievicz, and Larkin.

Then again, there are many Black 47 circles still to be squared, a lot of gigs left to do, a multitude of young (and old) minds to be inflamed, and a lot of fires to be kindled and left smoldering. Tiochfaidh ár lá! — Larry Kirwan (September 2000)

Larry Kirwan was the leader of Black 47 for 25 years. He’s also a playwright, composer, and novelist. He hosts Celtic Crush weekly three-hour music and talk show on SiriusXM and writes a bi-weekly column for The Irish Echo.