Every St. Patrick’s Day, Chicago transforms from the Windy City into the Emerald City as the Chicago River is dyed a brilliant shade of green! 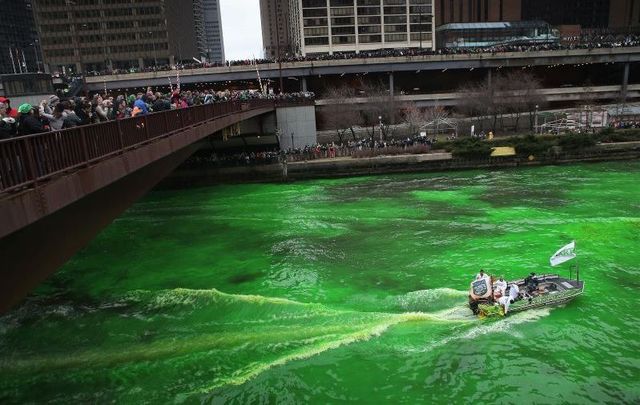 Every St. Patrick’s Day, Chicago transforms from the Windy City into the Emerald City as the Chicago RIver is dyed green. Getty Images

The St. Patrick's Day tradition of dyeing the Chicago River green is mesmerizing.

Turning the Chicago River green for St. Patrick's Day first began in 1962,  one year after Savannah, GA tried to dye their river green but did not succeed. Mayor Richard J. Daley suggested that the city find a way to turn Lake Michigan green for St. Patrick’s Day. According to the Chicago Tribune, the business manager of the Chicago Plumbers Union, Stephen M. Baily came up with the idea of dyeing the river with a solution that was used for identifying pollution and had the happy side effect of creating green streaks.

The river is traditionally dyed on the morning of Chicago’s St. Patrick’s Day parade, which takes place the Sunday before St. Patrick’s Day. In the first few years of the greening tradition, 100 pounds of oil-based fluorescein were poured into the river, leaving it green for close to a week.

After some environmental protest, as Mental Floss recounted, in 1966 the parade organizers switched to using just 25 pounds of a more eco-friendly vegetable-based powder (the recipe is a secret), which, funnily enough, is orange until it hits the water. This keeps the river green for most of the day.

It only takes two small motorboats to dye the river, looping back and forth between Wabash Avenue and Columbus Drive. The larger of the two carries a crew of four who pour the powder into the water with flour sifters. The smaller boat, which ferries two people, helps to disperse the powder.

It takes 45 minutes for the green color to reach its full vibrancy, et voila!

You can watch back on the Chicago River being dyed green for St. Patrick's Day in recent years here:

Have you seen the Chicago River turn green for St. Patrick's Day? Let us know in the comments!