"Roll out the Astra Zeneca!," an original song from Irish man Eamonn Macdonncha and his sons, is going viral over on Facebook. 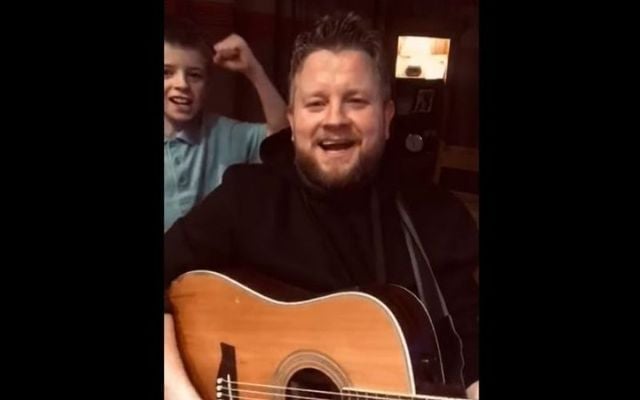 "Roll out the AstraZeneca all across the nationwide!"

Irish man Eamonn Macdonncha and his two sons have gone viral in recent days after sharing their performance of their (decidedly Irish) original tune "Roll out the AstraZeneca" on Facebook.

In it, Macdonncha is accompanied on vocals by his sons Ciarán, 10, who also shows off his flute skills, and the more camera-shy Cóilín, 7.

Macdonncha told IrishCentral that his song was "getting a great reaction the country over," and added that "the sooner we're all vaccinated the better."

The nearly-six-minute video pokes fun at everyone from Tanaiste Leo Varadkar, to Northern Ireland's First Minister Arlene Foster, and, yes, even the Queen of England and Meghan Markle.

The utterly catchy refrain, which we're sure will be belted out in Irish pubs in the hopefully not too distant future, goes: "Roll away, oh roll away! Roll out the AstraZeneca all across the nationwide."

Speaking with his local Meath Chronicle, Macdonncha said: “I was watching the news two or three evenings ago and heard the term Astra Zeneca and there is an Irish ballad called Salonika and I thought you could do a great skit on that one changing the words but using the same air.

“I thought I’d have some fun rewriting the song and give people a laugh and make them smile."

While it's no doubt a catchy tune, Macdonncha's tongue-in-cheek lyrics are bringing smiles to people who are by and large fed up with Ireland's lockdowns.

Here are a few notable lines from Macdonncha's "Roll out the Astra Zeneca:"

it’s brought us to our knees,

and for the PUPs

Oh when will the public houses

ever open the door?

At the rate of vaccination,

Well Varadkar got the vaccine

just earlier in the week.

He had it only in his arm

and the thing began to leak!

Well they gave it to Arlene Foster

and it drove her half insane,

she claims she's got some Fenian blood

and she wants to join Sinn Féin

There's no one in the restaurants

and there's no one in the pubs,

and there's not a team in Ireland

that can stop the bloody Dubs!

When they jabbed the Queen of England

it created quite a spark,

they gave none to Meghan Markle

saying her skin was way too dark

Bravo to Eamonn, Ciarán, and Cóilín!

Have a video or story you'd like to share with IrishCentral? Drop us a line at Submit@IrishCentral.com!