Irish teen Hannah McSorley is now affectionately known as "Tadpole Girl" after her wholesome videos won the hearts of people across the Internet. 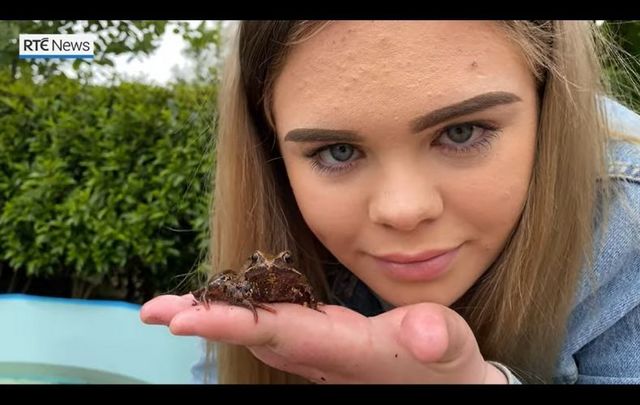 Hannah McSorely has been raising the tadpoles in Co Tyrone since mid-March. RTE News, YouTube

Irish teen Hannah McSorley, who decided to raise more than 37,000 tadpoles during COVID-19 lockdown, has gone viral on TikTok.

Hannah McSorley from Co Tyrone "spawned" the idea to raise the tadpoles in late March when lockdowns were introduced across Ireland and Northern Ireland.

Since then, the 17-year-old's project has gone viral and has earned her the nickname of "Tadpole Girl."

She has amassed more than 500,000 followers on her Tiktok channel - @.babyfrogs - and she has recently signed with US influencer agency Markerly.

Her journey to TikTok fame began when she found a patch of frogspawn in a puddle near her home and took it home to educate her nine-year-old brother, according to the Guardian.

She added another clutch of tadpoles the following week and what began in a jar now required a paddling pool filled with rocks and plants in order to survive.

McSorley feeds the tadpoles boiled lettuce and spinach after consulting with the Northern Ireland Environment Agency and changes the water in the pool every fortnight.

She jokingly estimated that there are 37,927 tadpoles in the pool.

The tadpoles began to sprout legs last week, meaning that the pool will be full of fully-formed frogs in just two or three weeks' time. She said that a pool full of frogs would not be "the easiest thing to look after."

She said that her newfound social media fame has come as a  great surprise.

"I’m honestly amazed by the following I have," she told the Guardian.

She explained why the videos had become so popular.

"I find the tadpoles very peaceful to watch. People love the wholesomeness of my videos and their simplicity. It’s just about tadpoles living their best lives."

Ryan Hennessy, frontman for the Irish rock group Picture This, tweeted about McSorley's project, calling it the "most wholesome and simultaneously chaotic behavior" he had ever seen.

That girl on TikTok raising 37,927 tadpoles in her back garden is the most wholesome and simultaneously chaotic behaviour I’ve ever seen.
I genuinely have no choice but to stan.

Others said that this huge influx of frogs was like a plague from the Book of Exodus.

Right no harm but I've just seen a tiktok from a girl i think from Derry who's raising 37,000 tadpoles out her back, in a few weeks time there's gonna be a 1 frog per 3 people in Derry during a pandemic this is straight from the book of Exodus,

I've just watched 77 daily tik toks on 37,000 tadpoles being grown in this girl's back garden. She is growing a plague, this will be the final straw that breaks society.https://t.co/jYT2q8knHv

on tiktok there's a girl in Derry raising 37,927 tadpoles and they're getting pure big so i just wanted to say good luck to everyone from Derry in the coming weeks

McSorley, however, has done her research:

I’ve actually done a lot of research and it’s not as bad as you think. In context to my surrounding environment my tadpoles are only appropriately 5% of the tadpole population in a 2 mile radius of where I live, and the natural tadpoles are all dead due to abnormally dry weather.

So releasing my froglets in small groups of 15 in multiple locations within the 2 mile radius, will actually halve huge benefits and help replenish the natural ecosystem as our recent abnormally dry weather has completely wiped out all natural sources.